Thierry Henry brought the curtain down on his second stint in the Premier League in typical fashion in Saturday, securing a 2-1 win for Arsenal with a stoppage-time winner. Sunderland, themselves not unused to late victories, will feel disappointed - this was a game that saw little between the two sides.

Continue reading as we take a tactical look at proceedings...

Martin O'Neill opted for the same side that lined up at Middlesbrough on Wednesday night. 120 minutes of frenetic cup football was sure to have taken its toll, but with Sunderland still missing several key first-team players, their manager was left with seemingly little choice. Stephane Sessegnon led the line alone up front, with Fraizer Campbell designated a role on the right-wing in a 4-5-1 formation. A new, notable feature of the Black Cats' tactics was the emergence of Seb Larsson in a more advanced role. With Campbell occupying his usual position, Larsson moved inside - often he found himself as the furthest man forward in the side, effectively taking over Sessegnon's striking role.

On the opposing side, Arsene Wenger, despite a Champions League encounter in midweek and a return to Wearside in the cup next weekend, opted for a strong starting XI. Robin van Persie was flanked by speedy youngsters Theo Walcott and Alex Oxlade-Chamberlain as the Gunners lined up in a 4-2-3-1, with Tomas Rosicky in an attacking midfield role between the two. Alex Song and Mikel Arteta sat deep in the middle, protecting the back four of (from left to right) Thomas Vermaelen, Laurent Koscielny, Per Mertesacker and Bacary Sagna.

Saturday was the first time since his installation as manager that Martin O'Neill can be said to have got things wrong tactically. His decision to go with a 4-5-1, while understandable, proved to be the wrong one - it afforded a frankly average-looking Arsenal side too much respect, and negated Sunderland's own attacking capabilities.

Stephane Sessegnon was left highly isolated up front, a problem not helped by the side's distribution. In goal, Simon Mignolet attempted fourteen passes, all of them long balls, and unsurprisingly completed just two successfully. Sessegnon was, predictably, easily beaten in the air; the only time Mignolet accurately picked a pass was when he aimed the ball out wide to James McClean.

The decision to place Seb Larsson as the most advanced midfielder was also a strange one. Larsson's effectiveness thus far has came from out wide, whipping in dangerous balls. 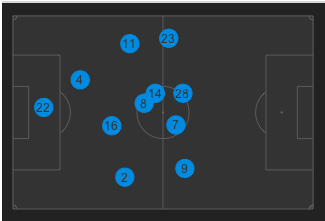 As shown by the above graphic, Larsson was, on average, almost as far forward as Sessegnon. Despite this, he was largely ineffective in the role - the Swede did not manage a shot on goal. Furthermore, this move consequently inconvenienced Craig Gardner. As the graphic shows, Gardner was Sunderland's least advanced midfielder. Given his recent performances, and his ability to find the net, O'Neill's men denied themselves a valuable attacking outlet here. 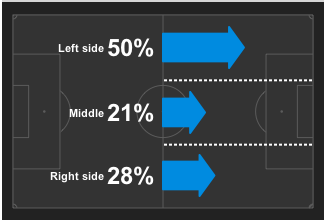 The above graphic also shows that Sunderland relied heavily on attacks down the left, through Irishman James McClean. This was understandable, following his surge in form over the past two months, but it again was an example of where Sunderland constrained themselves unnecessarily.

McClean, of course, scored his side's only goal, but opposing number Bacary Sagna had an excellent game, and for the most part nullified the Sunderland man.

As a result of this focus down the left, Fraizer Campbell on the opposite wing was scarcely noticeable. This may well have been a deliberate ploy - Campbell was likely to have been tired from the recent deluge of games - but it was still slightly odd, especially given that Arsenal's left-back was Thomas Vermaelen. Though an excellent defender, Vermaelen was primarily trained as centre-back. Though he can fit in at left-back rather adeptly, it is not his preferred position - Sunderland's failure to really seek to take advantage of this was disappointing.

Despite their problems going forward though, it must be said that the Black Cats were again excellent in defence. Aside from the two goals, they afforded Arsenal scarcely a notable shot on goal.

Robin van Persie, by far the Gunners' leading man this season, was marked out of the game by the excellent partnership of John O'Shea and Michael Turner. Turner, as shown by the average positions graphic, dropped deeper, coming in to van Persie with a second tackle should O'Shea have failed to stop him with the first. The two centre-backs led the game with regards to overall interceptions - they contributed 50% of Sunderland's overall total.

In addition, the wide men - Walcott and Oxlade-Chamberlain - were kept quiet too. Overall, between them, van Persie, Rosicky and Sagna, the North London side attempted 21 crosses, and were successful in just 5. This came from both effective defending in the middle, but also from how full-backs Bardsley and Richardson limited the opposition to mostly crossing for deep (and thus, less threatening) areas.

It was hence the substitutions made by Arsene Wenger that changed the game. Per Mertesacker's unfortunate injury as Sunderland scored saw him replaced by midfielder Aaron Ramsey, a bold move that signified Wenger's determination to get something from the game.

The more defensively minded Alex Song dropped into Mertesacker's role at centre-back, leaving Ramsey to play in a more advanced midfield role. The decision was instantly vindicated, as the Welshman scored with what was effectively his first touch.

It was two substitutes, too, that crafted the winning goal. Andrey Arshavin, long held in disdain for his lethargy, was introduced on the 87th minute to little acknowledgement. Typical then, that he decided to turn up on Saturday.

Having already found too much room once and fired in a dangerous looking cross, Arshavin was allowed to do the same a few minutes later, with Phil Bardsley evidently not having learnt his lesson. This time Thierry Henry, the old master, manoeuvred himself perfectly between Turner and O'Shea in a manner van Persie had been unable to, timing his run perfectly to tuck away the ball in. It was a brilliantly worked goal from the visitors, but Sunderland will feel disappointed that the diminutive Russian was allowed such time to fashion a cross.

All in all, this was a fairly flat game that saw little in the way of attacking endeavour. Prior to their goal, Sunderland enjoyed a hefty spell of pressure, but once McClean scored it seemed the home side had burnt themselves out. On the contrary, Arsenal only came alive once their substitutions injected some much needed energy and variety.

Martin O'Neill may well have slipped up with his attacking tactics here, but there are understandable reasons why. Firstly, it is difficult to know which Arsenal will turn up, so committing too many men forward straight away could have backfired. That said, once it became apparent that Wenger's side were themselves fairly lethargic, O'Neill should perhaps have switched back to a more direct 4-4-2 or 4-4-1-1. Second, his own side were visibly shattered towards the end.

It was disappointing for the Black Cats to lose in the manner they did, but it was by no means world-ending. They now have a much-needed week to prepare for the Gunners' return this Saturday evening, where perhaps Sunderland will be more robust when going forward. This time around it was Wenger who won the managerial battle, but, so fine were the margins, it would be unwise to simply assume next week will see more of the same.