Not entirely fresh on the back of their mammoth Boxing Day effort against the champions, Manchester City, Sunderland welcomed Spurs to Wearside on Saturday. A first half goal from John O'Shea had the red and whites in front, but a quickfire second half double ensured the visitors returned to North London with all three points. 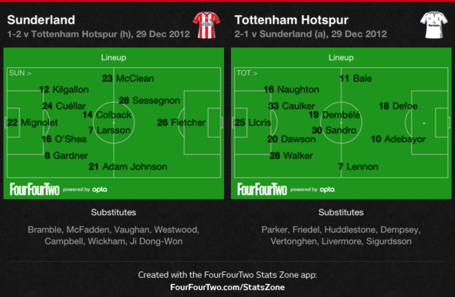 There was only one change in personnel for Sunderland at the weekend, as John O'Shea returned to the starting XI in place of the ineligible Danny Rose. With O'Shea returning to centre-back, this meant Matt Kilgallon was shifted to left-back, where he was faced with the task of taming Aaron Lennon.

As for the visitors, their formation may be a 4-4-2 on a basic level but, in practice, it works much more differently. Up front, Jermaine Defoe often drops deep in search of the ball, with Emmanuel Adebayor a target man. Lennon and Gareth Bale are hugely aggressive wingers, meaning Sandro and Moussa Dembélé must act as anchors frequently. Most interestingly, when in possession, Kyle Walker and Kyle Naughton vacate the natural full-back positions and push forward, with the centre-backs spreading wide across the field.

The Importance Of Width

That final point was key in how Spurs controlled much of this game. Confident in their ability to shut down and potential surge from Sunderland, Villas-Boas' men pushed high up the field and used every inch of the Stadium of Light pitch in an attempt to break down O'Neill's stoic side. 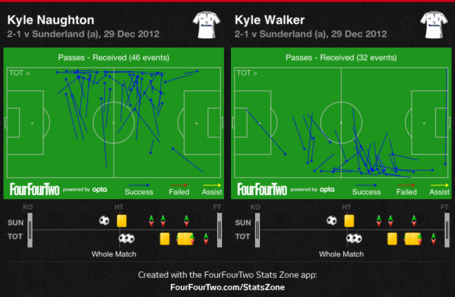 Kyle Naughton and Kyle Walker both received the ball frequently in the Sunderland half, something which was made possible by Stephen Caulker and Michael Dawson spreading themselves wide and covering a large area of the field. Walker, in particular, received passes in advanced areas. Meanwhile, on the left, Naughton also did his best to get forward, but was also happy to receive the ball then quickly move it down the line to Gareth Bale. The pass combination of Naughton-Bale was the most frequent in the match, occurring a mammoth 22 times.

Andre Villas-Boas had clearly noticed the weakness in Sunderland's central midfield, and set about exploiting it by dragging Jack Colback and Seb Larsson wide. This was made possible by not only having four very good wide players, but also by them all performing well. When the two men in midfield, Dembélé and Sandro, and the two centre-backs, Dawson and Caulker, also performed excellently, Sunderland were never likely to salvage anything from this game. 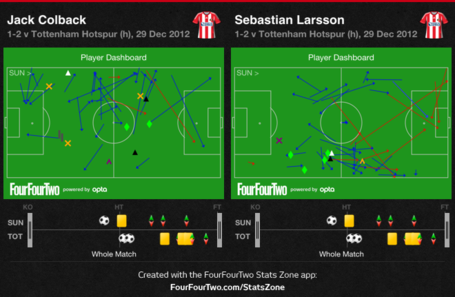 Despite playing in central midfield, a lot of Colback and Larsson's activity came in wider areas. Worried by the wide threat of the visitors, they found themselves dragged across, knowing full well the trickery and pace of their opponents. Indeed, Spurs attempted 19 take-ons, seven more than Sunderland.

Of course, Villas-Boas' strategy was one not without risk. Despite excellent performances from Dembélé and Sandro - the former misplaced just two of his 64 attempted passes - the attacking nature of the four wide men could have left his side dangerously exposed.

Two things ensured this was rarely the case. First, from a Spurs point of view, Walker and Naughton were excellent at recovering their position. Sunderland rely a lot on James McClean and Adam Johnson, but these two had rarely got their heads up when on the ball before being confronted by their opposite number. As well as this, Michael Dawson and Stephen Caulker were excellent in central defence, gifting Steven Fletcher barely a sniff. Fletcher took to moving wide, but a look at Caulker's clearances shows how the Spurs defender continued to get the better of the Sunderland frontman. 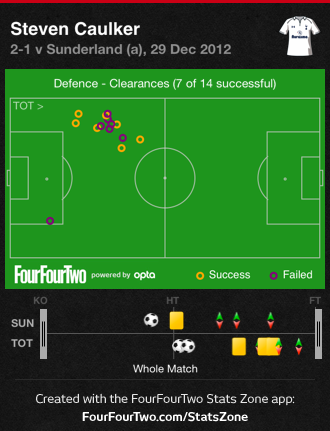 The second reason behind why Villas-Boas men were not exposed was Sunderland's poor use of the ball when they had it. No doubt suffering from fatigue, they failed to create much when going forward, gifting the ball away. In addition, they often sort to go wide with the ball, despite the gaps left by Spurs' strategy. As shown below, there was a deficiency of passes through the middle by the home side. 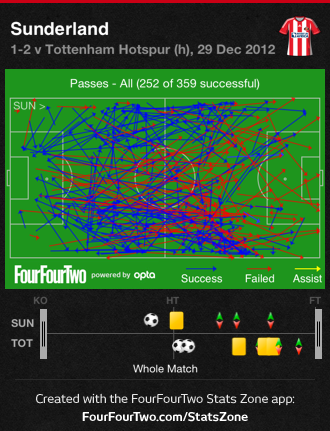 In addition, Steven Fletcher, a key part of Martin O'Neill's strategy, had a very poor game by his standards. Marshalled well by the opposition, Fletcher was poor at finding a man, giving the ball away 50% of the time. With Stephane Sessegnon hardly figuring behind him, this left the side needing to go wide - something which played directly into Spurs' hands. 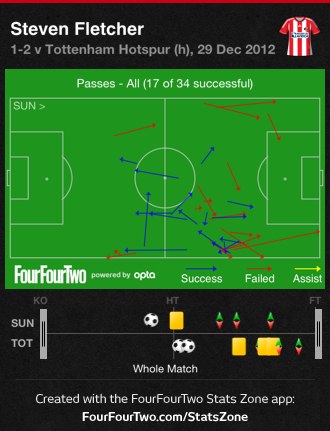 Despite what has been said here, this wasn't a dreadful performance by Sunderland in any stretch. There were plenty of mitigating circumstances for this defeat, not least the fact that, after the 1-0 victory over Manchester City and the effort involved there, the side looked extremely tired from both that game and the relentless Christmas schedule.

Truthfully, O'Neill's men came up against a side that is possessing of a much greater quality than themselves. When that is coupled with a well-drilled and effective game plan, such as the one Villas-Boas has implemented, then it was always an uphill struggle for Sunderland. Had the Wearsiders used the ball better themselves it may have been a different story, but this was one of those occasions where, quite simply, the better side won.