Manchester City don't much like coming to Wearside. In their last four visits, the Premier League champions have mustered just a single point, and it was a former City player in the guise of Adam Johnson who ruined Roberto Mancini's Christmas yesterday. 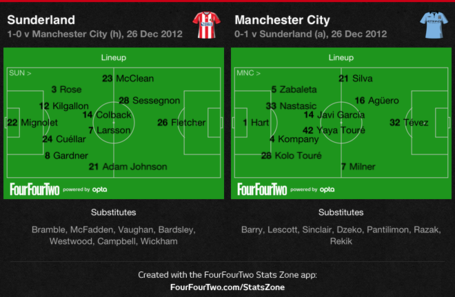 As is custom, Sunderland lined up in a 4-4-1-1 formation. The starting XI was as expected, save for the inclusion of Matt Kilgallon - the former Sheffield United man was called in in place of the unwell John O'Shea. As for Manchester City, last year's league title winners offered up a similar style, though Sergio Aguero played higher up than Stephane Sessegnon did for Sunderland, while Javi Garcia worked in a deeper midfield role, allowing Yaya Toure to venture forward.

This was not, in any sense, a game whereby Sunderland sat deep and then nicked one on the break. City dominated the opening ten minutes, but from there through to Adam Johnson's goal, the Black Cats offered as much - if not more - of an attacking threat than their visitors.

Sunderland employed a style which meant that they held an averagely high defensive line, but looked to break forward with speed and directness. With Johnson, Sessegnon and McClean all working on the same wavelength, it made for some impressive football - something that has been sorely lacking for much of the season.

Yet, after Johnson's goal, it became more of a defensive effort. City possess an abundance of talent and, with tired legs aplenty, Sunderland were forced into a retreat. They still offered chances going forward, with Joe Hart being called into action on a number of occasions, but for the most part they were concerned with keeping the ball out of Simon Mignolet's net. 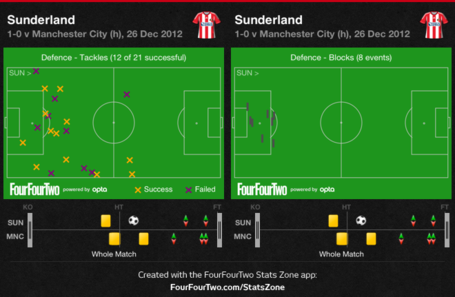 They managed remarkably well. Mignolet had a fine game in goal, yet in front of him his troops were extraordinarily well organised. As shown, numerous crucial tackles were won on the edge of the area; in addition, bodies were thrown at the ball time and time again, as the home side managed a hefty eight blocks across the ninety minutes.

Though it was a brilliant team effort, one of the key decisions by Martin O'Neill was how he chose to deal with Carlos Tevez. Whereas Sergio Aguero, marked by Carlos Cuellar, was given more time on the ball, O'Neill instructed Matt Kilgallon to follow Tevez everywhere he wandered, no matter how deep, and mark the Argentine out of the game. 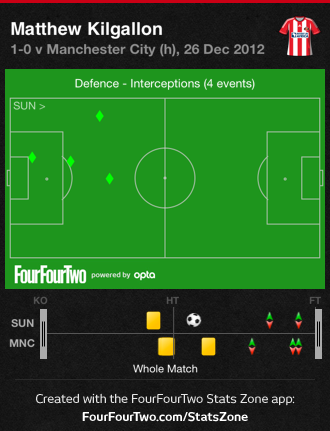 In a potentially risky strategy, Kilgallon was outstanding. He contributed four interceptions, and scarcely gave Tevez room to breathe. 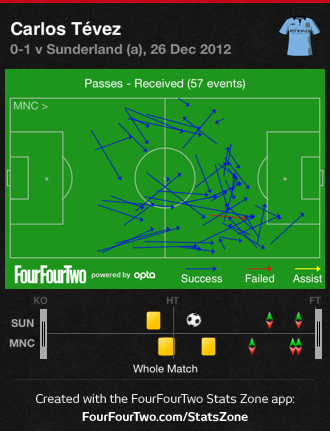 As shown, Tevez rarely received the ball in advanced areas such as the Sunderland box, as he had to dash backwards to pick up possession to avoid Kilgallon getting there first. The Sunderland defender's good display was matched in how, with twenty minutes remaining, Tevez was replaced by Edin Dzeko.

Yesterday marked a highpoint in Stephane Sessegnon's season. Plagued by poor form, the Beninese was excellent against City, finding space between the lines and working excellently as the central hub around which Fletcher, Johnson and McClean all buzzed. 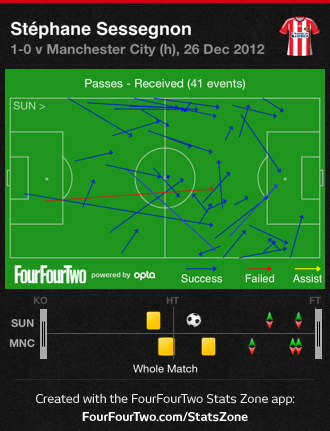 Sessegnon picked up the back often in the final third, all across the field, dragging City defenders with him and creating space for midfield players to rush into. In a refreshing change, both Seb Larsson and Jack Colback showed great attacking intent, looking to get ahead of the ball and into the opposition box.

Though only some have merited mention here, all of Sunderland's side were excellent yesterday. Perhaps most impressive was the left side - Danny Rose and James McClean were phenomenal. Indeed, the latter had by far and away his best game of the season, and scarcely put a foot wrong. McClean was even drafted to central midfield late on, a move that showed O'Neill's trust in his tackling abilities, and perhaps his most telling contribution came when, after missing a late chance to seal the game, McClean immediately turned and sprinted back into position, ready to stem the next City attack.

The champions, the first ten minutes aside, failed to click into gear. Javi Garcia and Yaya Toure were poor; David Silva invisible. Yet, as much as they struggled to find form, Sunderland were well equipped to prevent them from doing so. Colback and Larsson have received plenty of criticism in this column, but yesterday they were nothing short of outstanding defensively, and provided plenty going forward too.

Throughout the side, Sunderland's players gave everything and more - Danny Rose seemed to be substituted for sheer exhaustion. This was a deserved victory, and one that firmly underlined - if it even needed to be - that Martin O'Neill remains capable of getting the absolute maximum out of his players.