Every week we take a tactical look at the game gone by. Obviously we usually do this straight after the game, but Jesus' birthday party kind of got in the way a little bit. Anyway, here's our look back at all the stats and graphs from the Southampton game.

Share All sharing options for: Talking Tactics: Southampton (A) 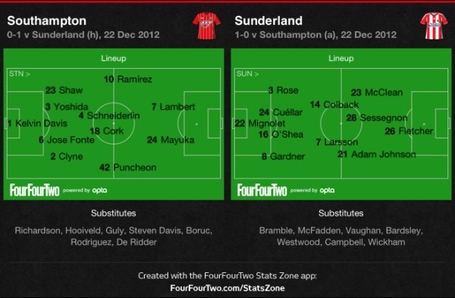 Martin O'Neill recalled fit-again Danny Rose to the starting line-up. He returned to his customary left-back starting spot, enabling Jack Colback to move into midfield. For Southampton, Emmanuel Mayuka was given a first start in the Premier League as Nigel Adkins opted for a partner alongside Rickie Lambert. 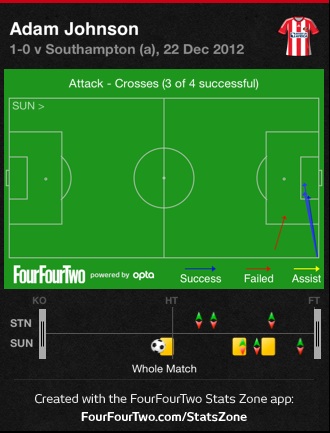 It was O'Neill's policy in the summer and it came to fruition again. Adam Johnson took the fewest touches of Sunderland's starters yet still managed to contribute sufficiently in attack. The England international was the most accurate crosser (75%) in the game, with him being particularly dangerous from set-plays.

In addition to his cutback that found its way to Steven Fletcher - via Stephane Sessegnon - for the goal, Johnson was credited with another clear cut chance created. To contrast, Southampton were credited with none despite their relative pressure in the second half. 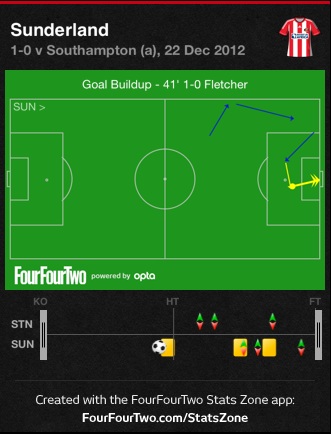 Despite moments of quality, Sunderland passes were intercepted 22 times, which was twice as many as Southampton. Just goes to show how much work O'Neill has to do.

After finding himself on the bench for a few games, Jack Colback's restoration to the first-team has seen two accomplished performances in the last three games. Here, Colback led the game in pass accuracy, with a very respectable 94%, and was the most accurate distributor in the final third (86%, just shading Jason Puncheon and Sessegnon). 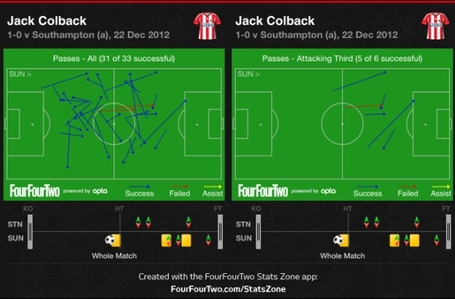 Where Colback was arguably most vital however was without the ball. He completed a game-high four tackles and won 9/11 contests for possession. It is also notable that his ‘ground duels' was very similar last week - winning 8/9 against Manchester United whilst at left-back. Seb Larsson was Sunderland's main offender in this regard against Southampton, winning only one of four. Without Lee Cattermole, Colback's ball-winning prowess is vital. 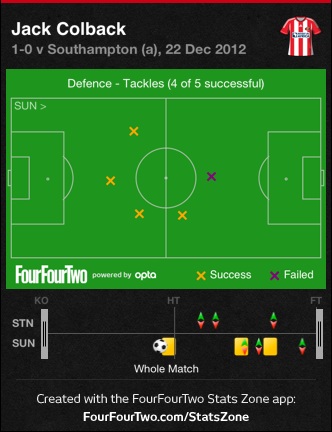 Although deemed a ‘smash-and-grab' win in the press, the result appears a little more comfortable when examined closely. The home side pressed, resulting in greater possession and Sunderland having to make twice as many clearances, but could only muster two shots on target - whereas the visitors managed five.

Both full-backs were Sunderland's highest in possession, which not only fits in with modern trends but takes the pressure off Johnson. Rose again was able to influence from the left-back position; in the opening exchanges his precise pass found Sessegnon which would have resulted in a goal if not for Kelvin Davis. 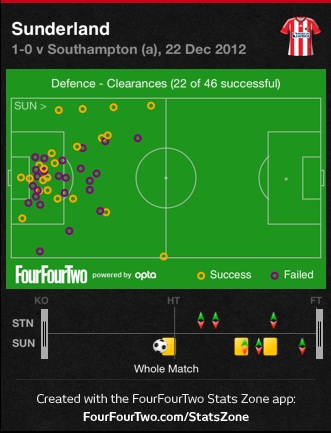 Considering the clearances (pictured, above), there is a lack of attempts in the six-yard area, which suggests Sunderland were not pinned deep by the opposition. Looking back at the clearances Chelsea had to make in a recent 3-1 defeat at the Stadium Of Light highlights the difference, yet Chelsea were considered comfortable winners. 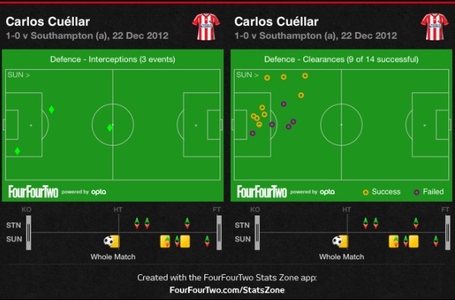 A large part of that defensive effort was Carlos Cuellar, making a team-high three interceptions and nine of Sunderland's 26 clearances. His contribution was aided by five of his team-mates blocking shots at goal, confirming O'Neill's post-match remark about his team's spirit. Moving forward quickly into the Boxing Day game with Manchester City, O'Neill will know he has areas his squad have to work on, but can be buoyed by the defensive resilience and moments on final-third quality his side displayed in this win.

Southampton Vs Sunderland: As It Happened