We did this last year and it went down pretty well, so here's this years Christmas Quiz! It's not particularly taxing, but it might help pass the time before your dinner's cooked. Are you ready?

Merry Christmas one and all, it's time for the 2012 version of our Christmas Quiz. Last year it went pretty well, so shall we crack on with this years? I think we should.

Here's the questions, and the answers will be along later on today. We must point out that there is no prize at all other than personal pride and a sense of achievement. Also the answers are as good as we could find answers wise. If you disagree, take it up with SAFC.com, Wikipedia and other information sources.

1. In what season were Sunderland first crowned champions of the English top flight?

2. Which of these Sunderland strikers has the most international goals - James McFadden, Ji Dong-Won or Steven Fletcher?

3. When Sunderland were first formed in 1879, what colour was the kit?

4. Who were Sunderland's first shirt sponsor?

5. How many different nationalities are in the currently listed first team squad (including players away on loan)?

6. Stephane Sessegnon has scored more goals for Sunderland in three seasons than he did at Paris St Germain in the same amount of time.

8. Having joined the top flight in 1890, Sunderland spent more than 70 seasons in the division before being relegated.

9. Sunderland were the first team in English football history to win every home game in a season?

10. According to the heights listed at the start of the season, David Vaughan is taller than Stephane Sessegnon.

11. At time of closing, what was Roker Park's officially listed capacity?

12. In the history of the club, how many players have been unused subs, but never played a single minute in the first team?

13. Which of these scored the most goals for Sunderland?

14. Which of these current Sunderland players has the most international caps?

15. How many members was there of the Drumaville Consortium, which took over the club in 2006?

Who Am I? (Quickest Gets The Point)

IV) When I retired from football through injury, I became a lorry driver.

Name The Players From Their Career Path (Permanent Clubs Only)

Which former Sunderland player has hidden themselves behind the Santa mask? 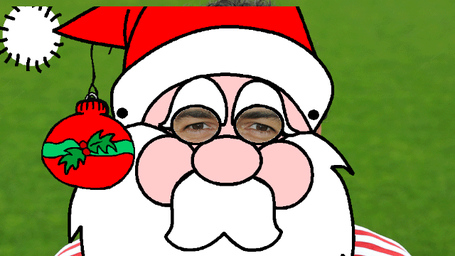 Up to December 21st 2012, how many different players had scored for Sunderland? (Closest without going over takes the win!)

Keep checking back, as later on today we'll be back with the answers!