Sunderland's trip to Old Trafford on Saturday was never likely to see the Black Cats come away with much. That proved to be exactly the case as, set on their way by two goals inside the first half hour, Manchester United ran out 3-1 victors. Still, despite the reversal, Sunderland could draw heart from some elements of the game.

Share All sharing options for: Talking Tactics: Manchester United (A) 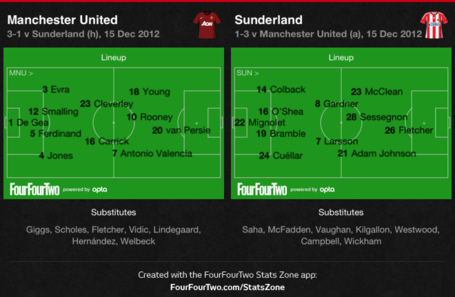 Both sides lined up in similar formations - though United's was much more attacking in its intent. With Michael Carrick as an anchor, Tom Cleverley was encouraged to get forward and support the attacking quartet in front of him. For the away side, no such anchor existed; Seb Larsson and Craig Gardner more often than not moved as one, in a game where Sunderland struggled to retain possession against their superior opponents. 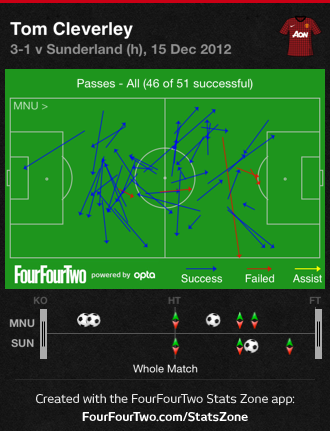 As stated, part of United's gameplan was to allow Tom Cleverley to break forward and provide extra impetus to the home side's attacks. This was, of course, most clearly seen in the game's second goal, where Cleverley exchanged a neat one-two with Carrick before curling expertly beyond Simon Mignolet.

That goal, as with United's other two, could have been avoided from a Sunderland perspective. In that instance, two Sunderland men failed to track Cleverley as he played a wall pass with Carrick - though the quality of the finish was still worthy of praise. The first goal came as a result of a dreadful clearance from John O'Shea, while the third saw Robin Van Persie skip effortlessly through two attempted challenges before squaring for Wayne Rooney to seal the game. United undoubtedly contain greater quality, but Martin O'Neill will once again have been seething that each goal came from individual errors.

Still, the performance of Cleverley was a key factor in the home side's dominance. Anchored first by Carrick, then by Paul Scholes after the break, he was economical in possession and also sought to move the ball forward wherever possible. To his credit, Craig Gardner attempted similar for the visitors. But, as shown below, the difference in quality is evident; Gardner's forward passes often resulted in possession being lost. 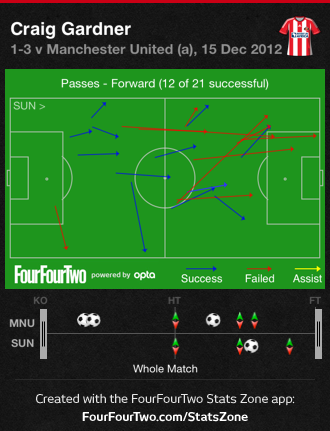 Encouraging Signs On The Left

One of the main positives for Sunderland on Saturday was their left side. Devoid of Danny Rose, Jack Colback slotted in at left-back, and had arguably his best game of the season for the Wearsiders. 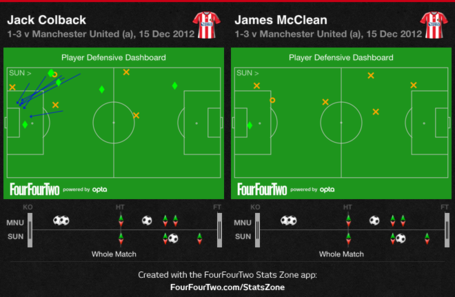 Both he and James McClean were excellent defensively. Each of them boasted impressive 100% success rates in the tackle, while Colback offered up a hefty six interceptions - all of which contributed to Antonio Valencia having a quiet game. Indeed, all three of United's goals came down their left side. 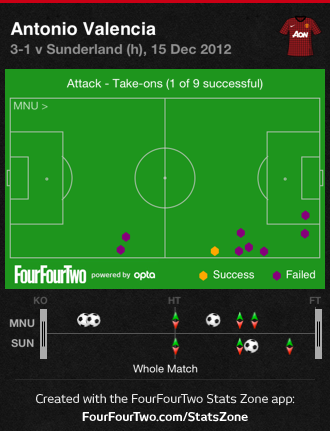 Despite the defeat, the performances of both Colback and McClean were encouraging. For all his detractors, McClean is an excellent player defensively, and in recent weeks his attacking vigour seems to have returned. Colback meanwhile looks far more assured in defence. With Danny Rose impressive in midfield recently, O'Neill would do well to swap these two, pushing Rose forward and telling Colback to focus on his undoubted defensive strengths.

As stated, individual errors cost Sunderland. United were, as was to be expected, the dominant force in this game. But, were it not for mistakes that could have been avoided, this game would have been a more difficult one for the Red Devils. As it were, they raced into a two goal lead, then punished Sunderland with a third before taking their foot off the gas.

Sunderland showed resolve, and could have had more than Fraizer Campbell's headed consolation. There were encouraging signs in various areas, especially up front, where Connor Wickham again impressed when replacing the injured Steven Fletcher. This was another defeat for Sunderland but, provided Fletcher isn't too badly hurt, not a disastrous one.

Manchester United Vs Sunderland: As It Happened