In a game many had already taken to naming a relegation 'six-pointer' - whether or not that can really be true as early as December - Sunderland welcomed Reading knowing a victory was absolutely vital. Thankfully, James McClean's third minute goal settled plenty of Wearside nerves, and the Black Cats ran out deserved 3-0 winners over a desperately poor visiting side. 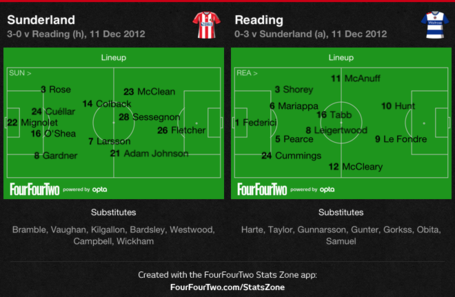 Sunderland, as is custom now, lined up in a 4-4-1-1 formation. Steven Fletcher returned from injury, ousting Connor Wickham, a move some - myself included - felt was harsh on the youngster. Still, Fletcher is the club's top scorer this season, so Martin O'Neill's decision was hardly a grand surprise. Phil Bardsley was dropped, leaving Craig Gardner to occupy the right-back position. Many speculated that Jack Colback and Danny Rose would swap roles but, instead, O'Neill persisted with the previously unprofitable central midfield partnership of Colback and Seb Larsson.

The home side was hamstrung by injuries throughout last night's game. First, Adam Johnson didn't make it out for the second half. This saw Bardsley come on at right-back, Larsson moved to right midfield, and Gardner pushed into the middle. Rose was then injured with twenty minutes remaining; Colback reverted to full-back, with david Vaughan the oncoming substitute. Finally, Bardsley himself was injured - severely, O'Neill would later confirm - sending Carlos Cuéllar to right-back, with Titus Bramble his central defensive replacement.

As for the visitors, Brian McDermott's men displayed a flat, unadventurous 4-4-2. McDermott's task is a thankless one, looking to keep a side afloat that is too laden down with limited footballers, but it remains that his formation last night didn't help. Nicky Hunt and Adam Le Fondre looked to impose themselves up front, but their small frames were never likely to trouble O'Shea and Cuéllar too greatly in a physical battle. In midfield, Jay Tabb and Mikele Leigertwood moved as one but were unadventurous. At the back, Reading simply gave the ball away too often to build any sort of meaningful attack; Alex Pearce was the most guilty culprit, misplaced 39% of his second half passes despite rarely being pressured by a Sunderland side content with its two-goal cushion.

The most evident change to Sunderland's style of play was an increased emphasis on being direct. This does not necessarily mean playing the long ball game - but, in a throwback to when Martin O'Neill first arrived on Wearside, there was a clear aim of getting the ball forward with both accuracy and speed. Indeed, James McClean's opener offered a perfect example: with the ball dropping free from a poorly cleared corner, McClean struck it first time with confidence and found the bottom corner. It was a marked removal from previous months, where McClean has, for whatever reason, sought to over-complicate things. 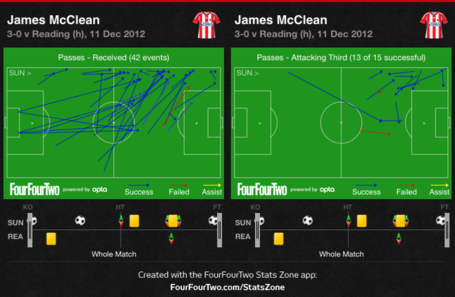 McClean was heavily involved throughout the game, and one of his side's better players. As shown by his receptions, McClean hugged the line in the same manner he did when first introduced to Sunderland's first team, and was the recipient of a number of long range passes. These, of course, were not aimless long balls; instead they were measured, and made with the main goal of getting the ball forward quickly. McClean was further impressive in that he was very good at keeping possession, misplacing only two passes in the attacking third, boasting a 93% pass completion rate overall, and finding a team-mate with 50% of his crosses - a marked improvement on previous showings this season. 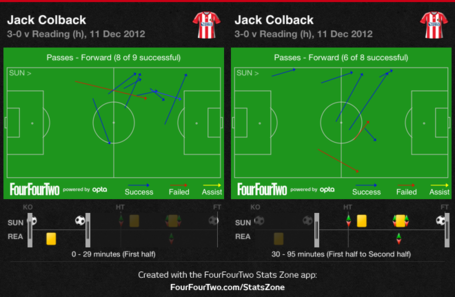 Plenty groaned - myself included - upon seeing the central midfield pairing of Colback and Larsson. Yet, mercifully, it became instantly obvious that Colback especially had been instructed to move the ball forward with more frequency, as opposed to his recent preference for "safer" square or backwards passes.

As shown above, in the opening thirty minutes, Colback attempted nine forward passes, from fairly advanced areas too. His high success rate showed exactly what this column has been saying for weeks: Colback can play incisive, forward passes, he simply needs the confidence to do so. Colback was immediately more impressive in the game's opening stages, actively seeking to mirror the directness shown by McClean and other team-mates.

Slightly disappointing was his reversion to type following Steven Fletcher's goal on the half hour mark. True, Sunderland were content with a two-goal lead, but it would have been nice to see them really look to rack up the goal count (a point that will be discussed later). As shown, Colback attempted only eight more forward passes in the remaining hour of the game. Though, his movement to left-back in the second half, where he saw less of the ball, did have an impact on that. 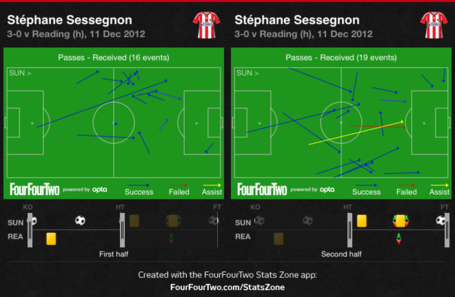 Sunderland's direct play was most evident in the second half. Instead of controlling the game like they had in the first half, O'Neill's men were happy to cede possession and look to hit Reading on the break. This is born out in Stephane Sessegnon's receptions. The attacking midfielder saw more of the ball in the second half than the first - this despite his side having less possession overall in that half - and was the recipient of plenty of measured long balls, including the late assist from Carlos Cuéllar.

This perhaps showed why O'Neill seeks to play the way he does. Sessegnon is undoubtedly a supremely talented footballer, but is not as quick as he may first seem. When the area of play is compressed, as it was in the opening half when Sunderland's back four pushed up, Sessegnon can find himself crowded out, needing to beat too many men through skill alone. In the second half, Sunderland drew their visitors in, before sending direct balls up to Sessegnon who was now in much more space to beat opponents. It was an exact mirror of the early days under O'Neill. His goal late on perfectly illustrates how the home side enticed Reading to move up, before Cuéllar's through ball exploited them perfectly. 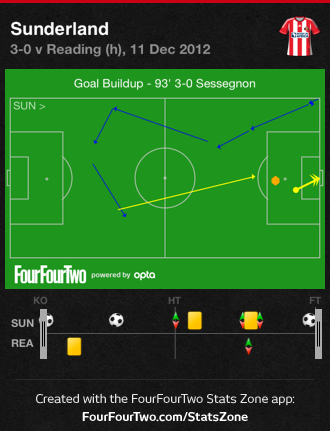 McDermott's men posed very little threat, aside from set-pieces. Alex Pearce should have turned home Nicky Shorey's opening half free-kick, Shorey himself then saw a good effort saved by Simon Mignolet, before the Belgian stopper was again on hand to turn away Nicky Hunt's late headed effort from a corner. 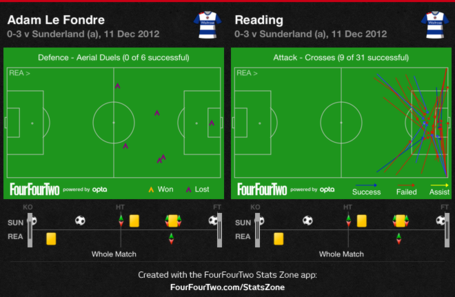 Where Sunderland's play was direct, Reading's was aimless. The ploy of lumping long balls up to two diminutive frontmen in the shape of Hunt and Le Fondre never seemed likely to work, and Le Fondre promptly won none of his aerial duels. To his credit, Hunt actually beat a Sunderland man to the ball in the air on 5 out of 10 occasions, but with a very static midfield behind him, Reading never got forward in enough numbers to really trouble the home side from open play.

As a result, it was disappointing that Sunderland never sought to impose authority and really send a message to The Royals. As shown earlier, Jack Colback immediately became more reserved following the second goal. After the break, Sunderland defended markedly deeper, seeking to defend their clean sheet as opposed to scoring more at the other end. 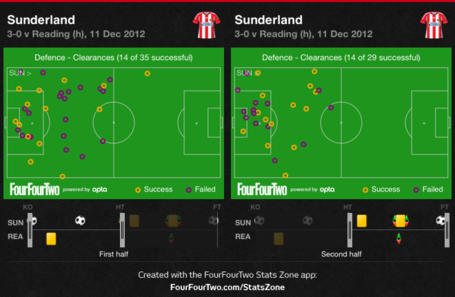 In fairness, there is nothing wrong with that and, aside from the odd set-piece worry, they did so with few troubles. Furthermore, given the injuries that followed, it would be fair to say that O'Neill's side were left disjointed, with a number of players having to take up new roles. Still, against such limited opposition, it would have been nice to see the controlled attacking intent of the opening half continue into the second.

This was a (much needed) comfortable victory for the Black Cats. McClean's early opener had the simultaneous effect of lifting the home side and demoralising the visitors, and paved the way for an excellent first half performance. The whole side was visibly more confident and, encouragingly, the front four was supported well by the centre of midfield, as shown by Larsson's neat one-two with Fletcher that left him in on goal. This, of course, was helped by the defence pushing up high, squeezing the competitive area and encouraging attacking play.

In the second half, Sunderland merely defended what was theirs. As stated, it would have been nice to see further attacking intent but, given the injuries, and the fact that conceding a goal through pushing forward would have set the nerves jangling in the Stadium of Light, few could really blame O'Neill for his caution.