Two teams struggling for a win in the Premier League met at the Stadium of Light as Chelsea travelled to the North-East on the back of an impressive 6-1 win in Europe.

Martin O'Neill recalled John O'Shea to the starting line-up after being declared fit, and Connor Wickham made his first start of the season in Steven Fletcher's absence. Rafa Benitez retained the same team that hammered Nordsjaelland; the 4-2-3-1 spearheaded by Fernando Torres.

No, Jonathan Wilson has not penned another book on the club, but it is something that is becoming ever more apparent, and was highlighted by Sunderland's full-backs. Danny Rose joint-led possessions for the home team despite its intention to attack down the right-hand side (33% of all passes were played right) and get Adam Johnson on the ball. 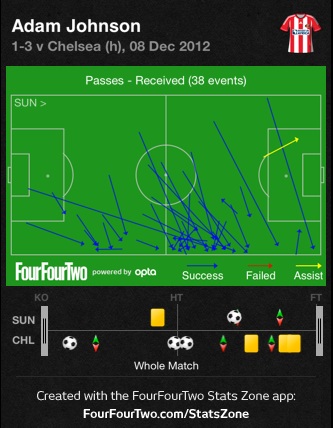 A feature of modern day football is the focus on full-backs, who generally see the ball more often than most other positions, yet Phil Bardsley managed a team-low 35 touches (excluding substitutes). What is also notable is that Johnson was the greatest transgressor when it came to losing the ball, much to the omission of an overlapping helping hand. Such a deficiency is emphasised on the other side of the pitch as Rose's athleticism and comfort in possession is something that O'Neill clearly wants to capitalise on, indicated by the on-loan man's move into midfield in the second half whilst Jack Colback came on and slotted in at left-back.

The game presented a ‘who would cope best' test as both teams were without their primary holding midfielder. In Oriol Romeu however, Chelsea had a player more suited to the role but he only lasted 20 minutes before an injury forced him out of the game. In his place, Oscar, a player less accustomed to defensive duties more than held his own in that regard with a game-high six tackles. The Brazilian central partnership of Oscar and Ramires were particularly effective in protecting their back four - recording 61% and 69% in ground duels respectively. 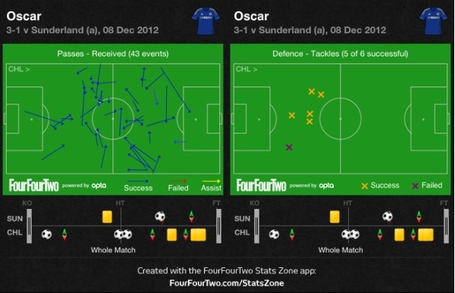 With Gardner and Larsson as Sunderland's central pairing, two attack-minded players had to combat Ramires' athleticism, and be mindful of the fluidity of Chelsea's attack as players advanced beyond Torres' starting position. Larsson struggled with both aspects, and was fortunate to escape a booking after numerous fouls - the first of which giving Chelsea a free-kick in front of goal.

Recent editions of this feature has identified the need for more mobility in midfield, and in Lee Cattermole's absence, the lack of a deeper, more tactically disciplined player. By law, Tesco is not allowed to be open 24/7, but it looks as if Sunderland's midfield will be for some time yet.

Throwing A Blanket Over The Front Four

Sunderland were noticeably reluctant to press Chelsea in the attacking half of the pitch, setting a ‘trap' which would become active as soon as the ball approached the half-way line. Whilst there was clearly method in O'Neill's tactics - by staying compact until a certain point it restricted the space of Chelsea's attackers, whilst also hoping to surprise and then dispossess them in midfield - it left Sunderland with a lot to do once they regained possession. To contrast, Juan Mata won the ball three times in the attacking third, instantly presenting Chelsea with a chance to create.

Having spent time on the bench recently, James McClean looked to be back to somewhere near his best. The Irish winger was busy, leading in both crossing and dribble attempts. Whilst none of his crosses found a team-mate, it was not for the want of quality as he delivered a number of dangerous balls into Chelsea's penalty area. 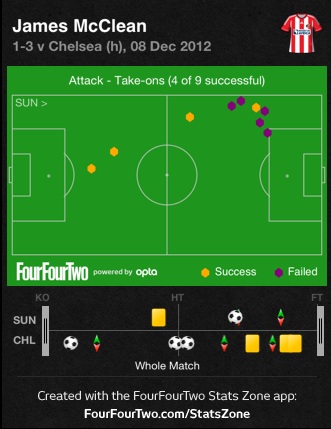 Fellow wingman Johnson has been steadily improving in recent weeks, and was the focus of Sunderland's attacks. Whilst the image above depicts a lack of Johnson involvement in and around the penalty area, Sunderland managed to allow him to try and influence the game with his 60 possessions - something that it had struggled to do with Stephane Sessegnon earlier in the season. Not to mention Johnson's only possession in the penalty area resulted in a brilliantly hit goal. It is no secret that having both Johnson and McClean causing defences problems will see Sunderland's fortunes improve.

On the face of it, it was an even game. Take a first glance at usually game-defining statistics and there is very little between both teams in terms of chances (seven each), final third passes (121:131 in Chelsea's favour) and shots on target (five each). Sunderland dominated the corner count which, correspondingly, led to Chelsea making almost twice as many clearances as the hosts - 45 compared to 25. 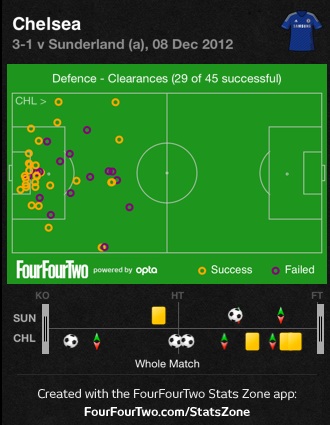 Yet, personal errors again cost Sunderland. In fact, all three Chelsea goals were aided by a red-and-white mistake. Against Norwich City, Sunderland needed to be slapped in the face with two goals before starting to play. Here, they came ready to play but still felt the need to gift-wrap a first league win for Rafa Benitez in his new job. With a quick turnaround and Reading coming to the Stadium of Light on Tuesday, the extent of O'Neill's input could not be simpler: cut out the errors.

Sunderland Vs Chelsea: As It Happened