Another defeat, and another need to look at it in great depth as we bust out the stats and graphs in another thrilling edition of Talking Tactics...

Having been knocked out of the Capital One Cup, Sunderland returned to their more accustomed formation ahead of the visit of Aston Villa. James McClean made way for the returning Lee Cattermole, whilst Phil Bardsley made his first league start of the season at the expense of Danny Rose, meaning Jack Colback reverted to left-back whilst Bardsley was deployed on the right-hand side of defence.

The former Manchester City man's tendency to cut inside, whether on the right or left, leaves him susceptible to attention from more than one defending player. This was the case on Saturday, and without an overlapping full-back dragging one of those focussed on Johnson towards the by-line, it will remain an uphill task for him to get his Sunderland career going in a fashion that was mooted when he signed.

There were promising signs in this game; the England international made three key passes, had two successful dribbles and he was the most successful final third passer in the game. However, only one of 14 crosses in open play found a Sunderland player. 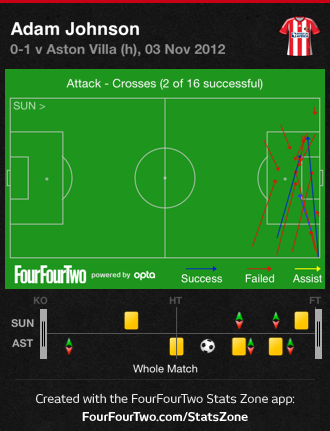 Cattermole's influence in midfield was highlighted by the Sunderland captain leading the game in touches and interceptions. He was dynamic, the game's best passer in the attacking half (81%) which allowed Sunderland to keep building pressure and was the only player to force Brad Guzan into a save. Defensively, he won all three of his tackles and a further three ‘duels' for the ball. That Cattermole was able to be prominent in the final third was a testament to his defensive prowess. 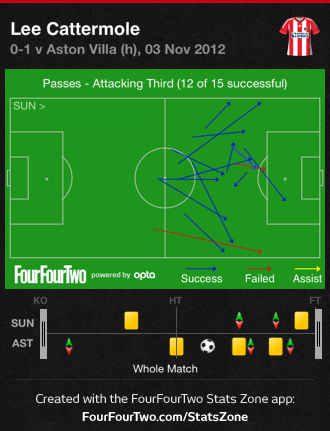 Sunderland created 10 chances, nine of which came inside the penalty area. In comparison, over half of their shots against Wigan, Stoke City and Newcastle were restricted to outside of the box. In addition to Johnson's key passes, Sebastian Larsson managed a 50% success rate on open play crosses and there was an increase in Stephane Sessegnon's activity in the final third - something that recent editions of Talking Tactics has highlighted a lack of.

Steven Fletcher's disallowed goal in the first half had the identity Sunderland had created last season written all over it. The growing problems seem to be that with Johnson adding to the calibre of Sessegnon in the creative department, there is an expectancy to become more than simply a team that are waiting to pick others off, and be able to probe. That Larsson, Johnson and Cattermole (tied with Stephen Ireland) had the game's highest final third pass success rate indicates that the transition is not too far away. 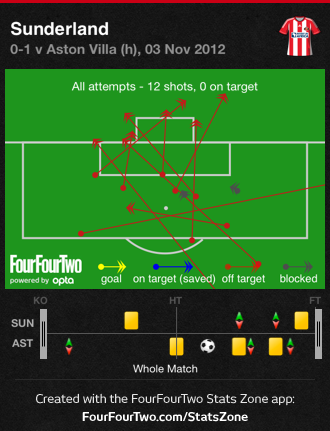 O'Neill had hinted at a return to midfield for Craig Gardner in previous weeks so it was not surprising, if a little disappointing, to see him in the middle from the get-go. Much an outlet for frustration last season, Gardner's general lack of awareness when central offsets the advantage of having his shooting ability closer to the opposition's goal, to the extent that moving him from right-back - a position that he has played well in - seemed futile.

In his preferred role, Gardner touched the ball the least amount of times for the home side - a stark contrast to his outings at right-back where he had been prominent on the ball. Just 14% of his passes were aimed ahead of him, again a team low, and he failed to make one tackle. But five of his six final third passes were successful which enabled his side to keep building momentum. 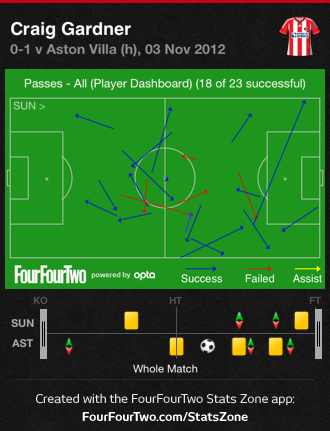 On top of the surprising omission of Rose, the manager's in-game changes followed suit. After the performance in the midweek defeat to Middlesbrough it was clear that 4-4-2 is a system unsuited to the current players at O'Neill's disposal. Having fallen behind, the decision to revert to two central strikers could have backfired had Andreas Weimann been more purposeful in his shooting and Agbonlahor had the courage to exploit a three-on-two in favour of keeping possession late on. The switch in system opened the game up, which simply allowed Villa's pace to come to the fore.

Shunting Larsson back to right-back to accommodate Fraizer Campbell was also difficult to understand at a time when the Swedish international was heavily involved in trying to get Sunderland back into the game.

Despite it being three defeats in five in all competitions, there were tangible signs that Sunderland are starting to turn the corner. As O'Neill pointed out post-match, the ball isn't quite falling for his side in the opposition penalty area at present, but there was a marked improvement in the amount of times that Sunderland worked the ball into that position of the pitch this week. Unfortunately Everton are next up; a difficult fixture made harder by the recent matches between the two teams.