Ugh. There have been some miserable, dank nights on Wearside in the past - but this one was right up there. The visitors - a QPR side newly managed by Harry Redknapp - were looking merely to stop the rot. Almost inevitably, Sunderland obliged, offering a toothless performance that left many baffled by both the squad's ability and Martin O'Neill's decision-making. 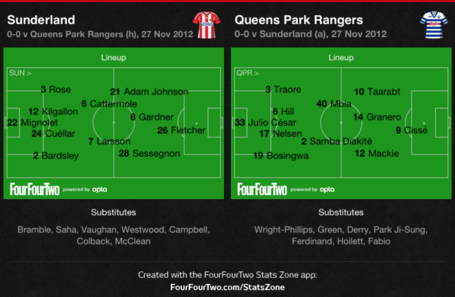 Martin O'Neill was left with a slight selection headache following Saturday's defeat to West Brom. John O'Shea was ruled out without doubt, and it was Matt Kilgallon who got the nod over Titus Bramble in central defence. In midfield, Lee Cattermole was a surprise inclusion, having been reported as injured too. That gamble inevitably didn't pay off - just five minutes in, an impact injury had Cattermole leaving the field once more, and the dropped Jack Colback was quickly returned to the field. Equally worrying for Sunderland was how O'Neill opted for a 4-4-1-1 formation in which the defence and midfield looked very flat and inflexible - Stephane Sessegnon was drafted out wide right, while Craig Gardner took up a role behind Steven Fletcher.

That would soon change, as O'Neill clearly struggled to decide how best to use his attacking midfielders. Ultimately Sessegnon would return to his central role with Gardner moving to the right wing, but then the late arrival of Louis Saha saw Sessegnon go back wide as the side went to a direct and uninspiring 4-4-2. In truth, it was all a bit of a mess.

Contrastingly, Harry Redknapp's game plan to secure a point first and perhaps hope for a victory later was much more straightforward. Dropping Shaun Derry, he filled his central midfield with powerhouses in the mould of Stephane Mbia and Samba Diakite, allowing the more adventurous trio of Taarabt, Granero and Mackie to be let off the leash in front of them.

The early departure of Cattermole allowed for one eye-opening insight to become abundantly clear - without their captain, Sunderland's central midfield is one of, if not the, weakest in the Premier League. The partnerships of Colback and Larsson is one low on physicality and sorely lacking in creativity, while other potential deputees - Craig Gardner, David Vaughan, David Meyler - all leave a lot to be desired.

This website, and indeed this particular column, has long been a fan of Jack Colback. Yet, over recent weeks, his flaws have become more and more pronounced, and they were ever more clear yesterday evening. 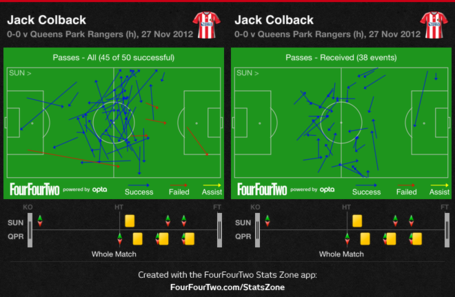 A 90% pass completion rate is, of course, desirable, but the problem is that Colback's passes do not aid the team in an attacking sense whatsoever. If Sunderland were a side that were getting themselves in front, then seeking to keep the ball and frustrate the opposition, Colback would be perfect for the job. But they aren't; their midfield is woefully pedestrian, and Colback is one of the chief culprits.

Against QPR, as shown, almost every one of Colback's passes went either square or backwards. Not only does this slow down Sunderland's attacking moves, but it gives the opposition ample time to get men behind the ball and snuff out any eventual attack. On the few occasions Colback tried to go forward, he gave the ball away. Furthermore, he rarely made attempts to break from midfield and cause QPR problems. The one time he received the ball in the opposing box, instead of seeking out a shot of taking a man on, he looked out wide and gave the ball away.

Of course, Colback is not the only culprit. Seb Larsson's displays in midfield are worryingly similar. Craig Gardner flatters to deceive in central areas - perhaps explaining why O'Neill moved him, and not Larsson, out wide last night. But those two at least offer a set-piece threat, something Colback doesn't. Until the youngster summons the confidence to take risks in possession and commit himself further forward, it is difficult to see what his selection merits.

The salient underlying point is that Sunderland's central midfield simply isn't good enough. Yet, last night showed how this is compounded by a lack of pace in central defence. 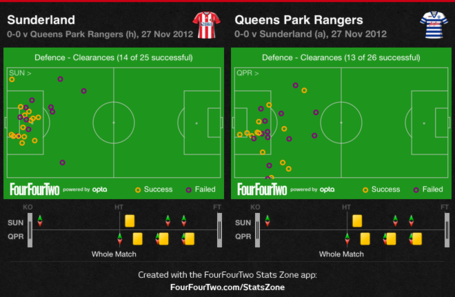 Carlos Cuellar and Matt Kilgallon had good games in central defence. Cuellar in particular chimed in with some crucial interceptions, and the two marshalled a vibrant Djibril Cisse well, as well as coping with QPR midfielders coming from deep. But the above graphic shows a marked difference in the two sides' defending. Sunderland's clearances come from noticeably deeper than QPR's, something which reflects the makeup of the two sides.

Faced with pace, Sunderland's defence dropped deep, terrified of allowing Cisse in behind. Steven Fletcher does not pose that threat, so the QPR defence could shield their goalkeeper from higher up the field.

This has a direct impact on the midfield. With Cuellar and Kilgallon at one end, and a flailing Stephane Sessegnon (or, Craig Gardner in the opening exchanges) attempting to link up with Fletcher, the area Colback and Larsson had to cover was astounding. All too often, they ended up chasing the shadows of Mbia, Diakite and Granero - squeezed together by a defence happy to move up and a striker happy to run from deep, QPR's midfield was an altogether tighter unit than the home side's. 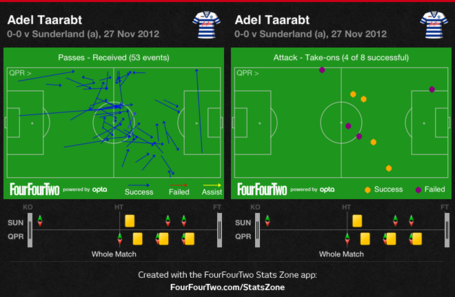 The most direct beneficiary of this was Adel Taarabt. The amount of times he picked the ball up in between Sunderland's defence and midfield was astounding, as he was allowed to turn and run with few obstacles. His frequent number of take-ons shows how, far from being crowded out by Colback and Larsson as O'Neill would have hoped, he was faced with just one man to beat before attacking Sunderland's defence.

Thankfully for Sunderland, they can actually defend ably, and QPR were wasteful. Taarabt, in particular, found good positions with the ball but either gave it away or made the wrong decision.

There are two solutions to Sunderland's gaping central midfield problem. The first is the more obvious: go out and buy a commanding central midfielder, one who can dominate the centre of the field and also provide a 'box-to-box' approach that is currently sorely lacking.

The second solution is less obvious, but could equally assuage the Black Cats' troubles: procure the services of a central defender with pace. By and large, Sunderland have been excellent in that position this season but, with all of their centre halves lacking pace, the problem of the midfield having to cover too much of the pitch remains. A pacey centre half would encourage the side to push up, giving the midfield less space to cover and - subsequently - assisting the side's attacking ambitions.

On a night where not much went right for Sunderland, the failings of their central midfield were the most striking. Jack Colback's refusal to take risks is infuriating but, as shown, it is not entirely his - nor Seb Larsson's - fault that the Wearside outfit is so lacking in central areas.

Away from the midfield issues, other worrying trends reared their heads again. Stephane Sessegnon, though not misplacing a pass, rarely took up threatening positions. Adam Johnson was lethargic and unambitious. Indeed, James McClean did more in twenty minutes than Johnson managed in seventy; the Irishman received the ball in more advanced areas and completed two out of three crosses, with the third a superb ball that narrowly missed the head of Sessegnon.

The main positive - once again - was Danny Rose. The left-back was as solid as ever in defence and, more pleasingly, was let loose by his manager to push forward. He fired in impressive crosses and got into good positions. The problem was that, so poor were Sunderland's midfield, Steven Fletcher increasingly felt the need to drop deep and help out, something which left noone in the area to get onto the end of Rose's good work.

In all, this was a desperately disappointing game for the Black Cats. Above all, it underlined the need for at least one - and perhaps two - new faces this January.