Time for our game-by-game tactical recap. We of course now head back to Saturday lunchtime's 2-4 home defeat at the hands of West Bromwich Albion, where of course there's plenty to be learned.

Usually, Talking Tactics opens with how the respective teams lined up and what was hoped to be gained from such. That will not happen this week, as this was no ordinary game. The traditional average position diagram for the starting players is unhelpful in depicting structure or attacking focus areas down to multiple changes (in the latter stages Danny moved centrally in order for Sunderland to make full use of his comfort on the ball).

It was the second game in which Stephane Sessegnon scored, but more importantly, his performance carried all the hallmarks of his play - leading the game in successful dribbles, making two key passes and hitting the target on four occasions. The most significant indicator of a Sessegnon revival was that this productivity came in spite of a lack of activity in the penalty area. Often drifting to the left, he was able to cut inside before managing to shoot. That swagger may just be back. 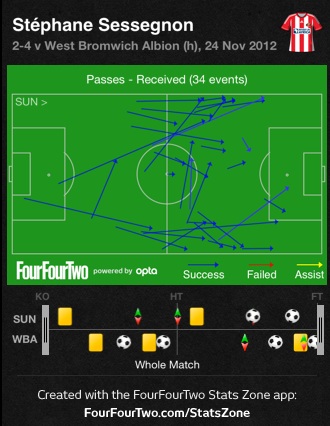 In addition to Sessegnon, Rose was particularly influential. As Sunderland's top passer (58 passes with a 93% completion rate), the full-back looked to link attacks and get forward in support. That Adam Johnson and Sebastian Larsson were at the business end of the Sunderland players in possession is again a plus-point; the former's four key passes was a game-high with Larsson just behind with three. Larsson was also the most accurate crosser - his four incomparable as the visitors only managed one successful cross. Productivity from the wide areas, as well as from Sessegnon, is again a step in the right direction. 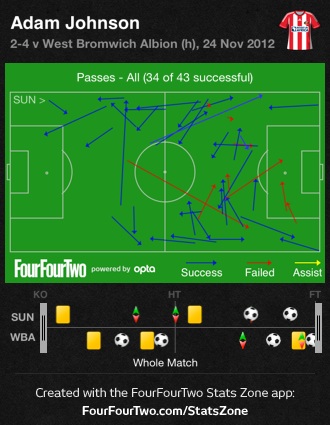 Still Searching For A True Identity

Martin O'Neill made no secret about wanting to reshape Sunderland in the off-season which contributed a considerable amount to his side's inability to create chances in the formative part of the season. Having largely countered teams last season, O'Neill wants to be more proactive - even probing - but the contrast has Sunderland facing somewhat of a personality clash.

The amount of times that Sunderland managed to test Boaz Myhill suggests that the team is coming to terms with what is now being asked of them, whilst O'Neill this morning was quoted of what he thinks is missing, saying: "I do think when we get momentum that we should thrust forward, rather than falling back again, which allows opposition to get back into line."

This can be seen primarily in Jack Colback's passing completion. His perfect distribution was the bittersweet award for a lack of conviction when counter-attacking opportunities presented themselves. Although West Brom's central duo kept its shape reasonably well, the flanks were left exposed due to Peter Odemwingie's natural attacking instincts. Colback wasn't the only one to take an extra touch, or check his forward progress, as an indecisive James McClean did similar when introduced in the second half, but a lack of conviction proves that the transition in the way that Sunderland plays is still in progress. 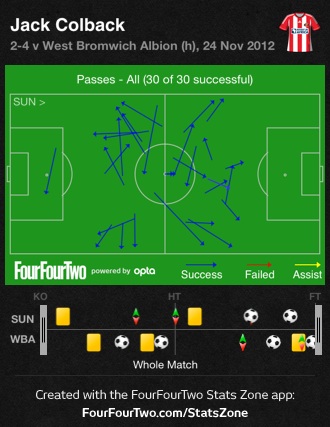 In another of our post-game pieces, Michael Graham suggested that this was a game that Sunderland were never destined to win. This seemed apparent long before Simon Mignolet's error or even the penalty incident which allowed West Brom to restore a two-goal advantage. Sessegnon's first shot of the game was patted down by Myhill and somehow squirmed away from his near post - it was the first of many uncertain stops. As the game progressed, it unravelled as a classic case of a team still battling their way out of a slump against a team yet to hit one.

To surmise the game, as West Brom manager Steve Clarke did, as a deserved away win is contradictory with the numbers - except the goals scored stat. Sunderland had parity in passing, were stronger in the air, and amassed 20 efforts at goal. To put that into perspective, it was the same number of attempts that the Black Cats had in their first four league games combined.

The West Brom back four was largely rigid - but for infrequent forays by Billy Jones and Liam Ridgewell - with Gareth McAuley effective in straight-batting balls into the penalty area away (his seven effective clearances more than any other player). Despite the result, the amount of chances that Sunderland created and the performances of Sessegnon and Rose in particular are comfort enough going into Tuesday's game against QPR.