A Saturday of Premier League shocks continued into Sunday, where Sunderland notched only their second win of the season - and their first away victory since February - against in-form Fulham. The Cottagers' loss of defender Brede Hangeland on thirty minutes following his rash challenge on Lee Cattermole certainly helped the Black Cat cause, but Sunderland still had work to do against Martin Jol's men who continued to attack even with a one-man disadvantage.

Share All sharing options for: Talking Tactics: Fulham (A)

The return of Lee Cattermole from injury saw Sunderland make one change, with James McClean dropping to the bench. Cattermole replaced Seb Larsson in central midfield, with the Swede moving to the right of an attacking midfield three, whereby Adam Johnson occupied the left wing. Steven Fletcher recovered from a knock in time to retain his place as the side's prime striker.

Martin Jol's Fulham offered a similar formation to the visitors, those theirs would more accurately be described as a 4-4-1-1 than a 4-2-3-1. Dimitar Berbatov led the line, supported from deep by the impressive Bryan Ruiz. Giorgios Karagounis made his first start for the club, but was forced to leave the field as a sacrifice following Hangeland's red card. 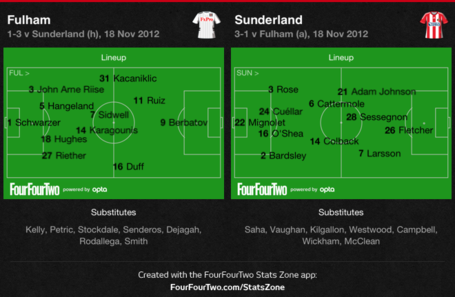 Many commentators after the game lauded Martin Jol for his ambition in continuing to attack even with a one-man disadvantage. Fulham refused to do what many sides with ten men do and sit back, looking to score on the break. Instead they took the game to their visitors and, were it not for Simon Mignolet's display in the Sunderland goal, may well have nicked a point.

Yet, for all this was admirable, it played into the hands of Martin O'Neill's Sunderland side. O'Neill, without doubt, favours a counter-attacking style. Criticisms have been levelled at his side this season for not being able to break down sides who have had a man sent off. The common theme has been that when sides set themselves up as a defensive blockade, Sunderland really struggle to get through.

Jol's decision to keep attacking removed this obstacle for Sunderland on Sunday. 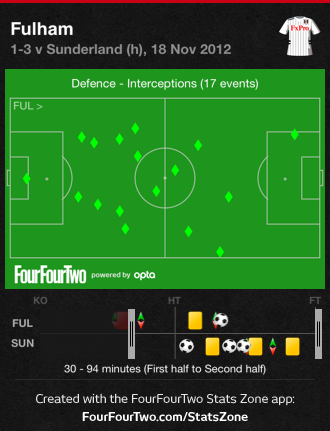 The above graphic is indicative of how much Fulham continued to press. It shows the interceptions made by Fulham players after Hangeland's dismissal, and clearly portrays how Jol's men refused to simply sit back.

In a way this played perfectly into Sunderland's hands. There were hairy moments - for example, Mignolet's two late one-on-one saves from Sidwell and Petric - but these came when Sunderland had a two goal cushion and were rather recklessly pushing to heighten their advantage. 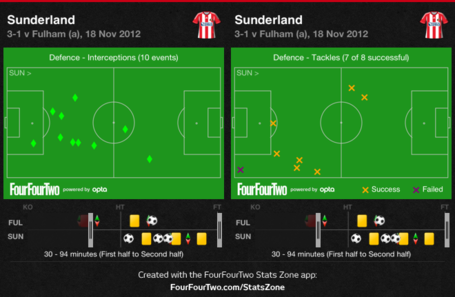 The problem with Fulham's attacking style was, as we already know, Sunderland are fairly solid defensively. This is especially the case when captain Lee Cattermole is on the field - of the 12 goals conceded by the Black Cats in the Premier League this season, the skipper has only been on the pitch for four of them. One of those was Petric's equaliser on Sunday, a goal that came about due to hugely amateurish defending whereby the Sunderland backline stood and waited for an offside flag that never came.

However, as shown above, Sunderland were able to make plenty of interceptions after the red card. More importantly, they succeeded in making tackles high up the pitch, something which enabled them to break away with speed. This is something O'Neill has looked to do all season, and it was perfectly executed in both Steven Fletcher's opener and Stephane Sessegnon's screamer.

It has been a common refrain of this column recently, but Sunday once again saw a brilliant, leading performance from captain Lee Cattermole. The above statistic about goals conceded is reflective of his influence, but it becomes even more so when we consider the minutes-to-goals ratio. With Lee Cattermole on the field, Sunderland have conceded once every 144.25 minutes in the league this season (or, roughly, every one and a half games). Without him, they have conceded once every 51.625 minutes (or, almost every half!).

The Fulham victory, though, saw something added to Cattermole's game that few believed existed: an impact on Sunderland's attacking play.

When Sessegnon's twenty-five yard effort hit the back of the net, it was his captain who was the furthest Sunderland shirt upfield, having burst from his own penalty box moments earlier. Furthermore, Cattermole sought to move the ball both more quickly than is his usual wont, and to move it into ever more advanced areas. 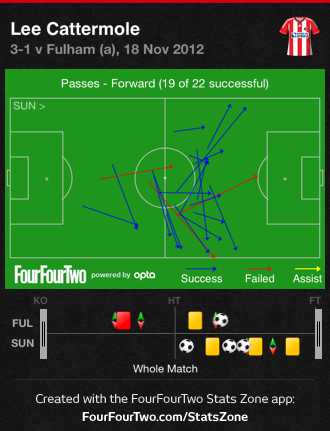 The skipper succeeded with 52 of his 57 attempted passes - a 91% success rate - and 19 of 22 attempts in the attacking third of the field. With many hoping Jack Colback would step up and offer Sunderland an attacking threat from deep, it was instead the captain who did this. Combined with another sound defensive display (not to mention a show of discipline when not diving into the challenge that saw Hangeland red carded) and this was an all-round superb effort from Cattermole.

The red card of Hangeland undoubtedly helped Sunderland. Prior to his dismissal, the home side had edged a drab game, though neither side had managed a shot on goal. Sunderland left themselves open at times in the second half, leading some to name Simon Mignolet as man of the match, but this was actually a sign of the side's growing confidence. Shorn of the shackles of recent weeks, the team looked to bang home a hatful - in doing so, they left themselves open in defence and relied on their goalkeeper's aid.

Overwhelmingly, though, this was a positive result for Sunderland. The three points were much welcomed, but they were mirrored by individual successes. Adam Johnson looked reinvigorated following last week's goal at Everton - his assist for Fletcher was a pass that reflected his £10 million transfer fee. Fletcher, again, played the role of lone striker with aplomb. Sessegnon, though often lacking in quality with his final ball, found lots of space and showed the awareness that made him such a success last season. His goal was just rewards for his tireless endeavors.

It remains to be seen whether Sunderland possess the faculty to break a side down that sets out its stall to defend, but they didn't need to on Sunday. Instead they showed an attacking prowess that has been sorely lacking so far and, in doing so, wrested a valuable three points from their hosts.