Another game, another defeat. A loss at Goodison Park was never really in doubt, yet for seventy minutes Sunderland were the better side against David Moyes' men. Two quickfire goals from Marouane Fellaini and Nikica Jelavic ensured the Toffees maintained their hold over the Black Cats but, finally, there were a number of positives that Martin O'Neill could take from Saturday's 1-2 defeat.

Share All sharing options for: Talking Tactics: Everton (A)

Manager Martin O'Neill was forced into two changes to the side that lost to Aston Villa at the Stadium of Light seven days previously. With both Phil Bardsley and Lee Cattermole injured, Danny Rose and James McClean were recalled to the starting lineup. This left Craig Gardner to fill in at right-back, with Rose replacing Jack Colback at left-back, as the latter moved to fill the role left vacant by Cattermole in midfield alongside Seb Larsson. McClean returned to his role on the left side of midfield in Sunderland's 4-2-3-1 formation - a system mirrored by the hosts. 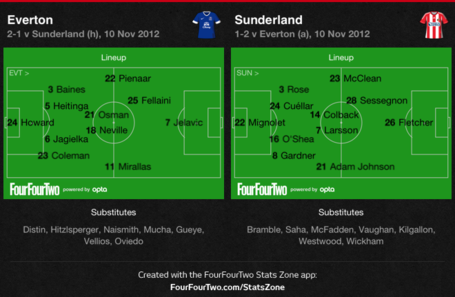 One of the first records that needs setting straight following Saturday's defeat is the debate surrounding how deep Sunderland defended after taking the lead. In what has fast become an easy critique for people to lazily turn to, plenty of dismayed observers argued that, after Adam Johnson's goal, O'Neill instructed his side to sit too deep and invite pressure from the hosts.

It is easy to see why people turned to this almost as soon as Marouane Fellaini equalised, as O'Neill's side has been guilty of this previously (notably in away draws this season at Swansea and West Ham). Yet, on Saturday, this was simply not the case. 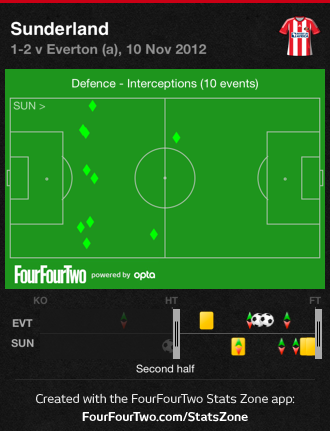 A look at Sunderland's interceptions in the second half at Goodison Park shows clearly the limitations that the visitors set on their host's attacking intentions. Far from dropping insanely deep, O'Neill's side evidently refused to invite great pressure from Everton - who were always likely to see more of the ball, being a very good side and one looking to get back into the game - and maintained an effective blockade some 25 yards from Simon Mignolet's goal.

With Lee Cattermole absent, many feared that Seb Larsson and Jack Colback would be overran in Sunderland's midfield. As it were, they surprised everyone by nullifying the threat of Everton's impressive talent. The early injury to Kevin Mirallas no doubt helped, but O'Neill's decision to get Larsson to man-mark Leon Osman worked well, and instructed Colback to get forward more often that he has done so far this season posed the hosts problem in the opening half. 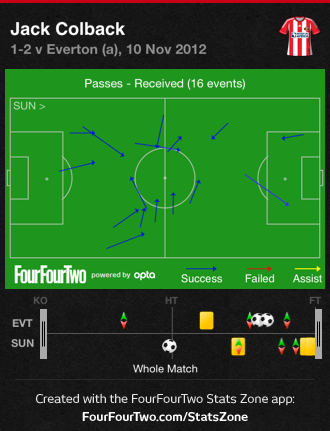 Although two instances of receiving the ball in the opposing penalty box may seem hardly noteworthy, it shows that - for arguably the first time this season - Sunderland's deep lying midfielders were attempting to get ahead of the ball and into goalscoring positions. Colback should have scored in the first half, but the fact he even got into such a position was encouraging given Sunderland's lack of attacking intent in recent months.

Both sides on Saturday employed a 4-2-3-1 system, but there was a marked difference in how the two teams applied that formation in terms of style. Everton, as the home side and equipped with better footballers, employed a possession-based game that sought to get as many people forward as possible; Sunderland, the visitors and not as embarrassed with riches, looked to counter-attack, and placed an emphasis on being organised defensively.

The most clear contrast came in the two sides' use of their full-backs. In Leighton Baines and Seamus Coleman, the Toffees have two players with stamina in abundance and not a small amount of pace - great attributes for getting up and down the line all day long. Danny Rose and Craig Gardner are by no means poor, but Sunderland's game plan and inferior squad means their attacking potential is inherently limited. 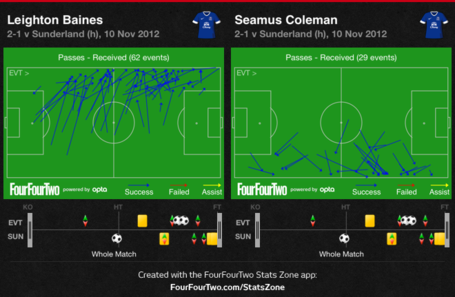 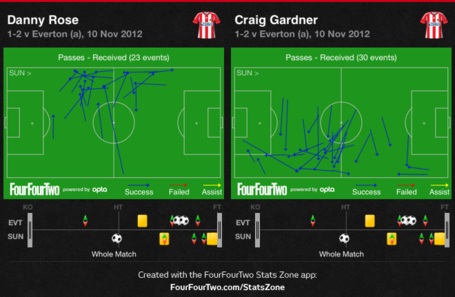 The graphs above show those differences in plain sight. The Everton full-backs - particularly Baines - receive the ball much higher up the pitch and with more frequency than their Sunderland counterparts. With Baines being one of the league's premier left-backs it is difficult to really blame Sunderland here - but it does bear thinking about how they could look to better control games against lesser opposition, something they have struggled with this season.

Rose and Gardner, for all they are used sparingly in attack, were excellent in defence on Saturday. Despite Everton's continued use of width, they struggled to get in behind the visitors - both of their goals came from central positions. The graphic below, showing Everton's backward passes in the game, illustrates how the home side were unable to get to the byline despite a number of efforts to do so. 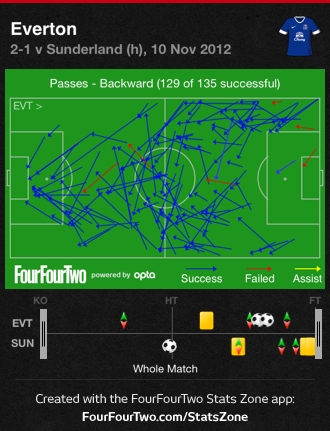 Truthfully, Sunderland did little wrong in this game. In the first half they were adventurous in attack and stoic in defence - on another day they may well have found themselves three goals up at half-time. After the break they did cede possession, but that is to be expected anyway against a very good Everton side who look to build attacks from the back regularly.

Contrary to popular belief, Sunderland's problem was not that they dropped too deep after taking the lead. They remained as they had done so during the opening half, and looked comfortable until Fellaini's speculative effort somehow found its way through a number of players unscathed. On another day, it would likely have been blocked or deflected wide. The second goal, with Sunderland visibly rocked by the shock equaliser, came by way of a touch of class from Fellaini, and a confident finish from Jelavic.

Martin O'Neill and his men can take plenty of positives from this, even if a defeat was disappointing. All across the team, there were good performers, and there was no shame in losing to a side that has long proven its worth in the top ten of English football. Most importantly, Saturday saw the first real sparks of life from Stephane Sessegnon and Adam Johnson. The two were instrumental in Sunderland's first half performance, and offered a tantalising glimpse of what could lie in the future of the Black Cats.