Martin O'Neill's Sunderland slipped to their first defeat of the season on Saturday lunchtime, as Manchester City dominated the midfield and ran out comfortable 3-0 victors.

Share All sharing options for: Talking Tactics: Manchester City (A)

Sunderland were soundly beaten on Saturday lunchtime, as hopes of another unbeaten season against champions Manchester City were blown out of the water with just five minutes on the clock. Aleksandr Kolarov's early free-kick set the tone for a miserable afternoon for the Black Cats, as Martin O'Neill's men went down 0-3 at The Etihad. 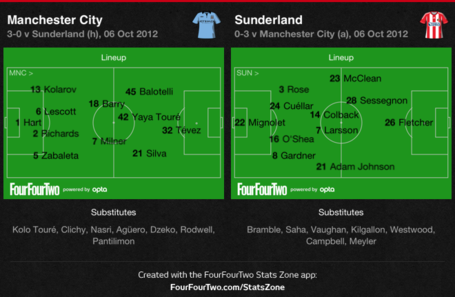 Martin O'Neill made just a single change from the previous week's victory at home to Wigan Athletic, with Carlos Cuéllar returning from injury to take the place of Titus Bramble in central defence.

Again the manager opted for a 4-4-1-1 formation. Simon Mignolet remained in goal behind a defence of Danny Rose, John O'Shea, Cuéllar and Craig Gardner. Seb Larsson and Jack Colback continued in central midfield - a worrying sign from the offset given their ineffective partnership at home to the Latics - flanked by James McClean and Adam Johnson. Stephane Sessegnon again occupied the role between midfield and attack, with Steven Fletcher firmly cemented as the club's main striker ahead of him.

The home side's embarrassment of riches means that, even when Robert Mancini rings the changes, they remain able to put out a side capable of beating most in this league on their day. On Saturday, they were without captain and leader Vincent Kompany; no matter, for Micah Richards was on hand to replace him. Richards joined Joleon Lescott in central defence, with Aleksandr Kolarov and Pablo Zabaleta at left- and right-back respectively. The home side's 4-2-3-1 formation saw Gareth Barry and James Milner in deeper central midfield roles, with Yaya Toure ahead of them. Mario Balotelli and David Silva flanked the Ivorian, with Carlos Tevez the lone striker. They all lined up in front of goalkeeper Joe Hart.

The Importance Of Space

Without Lee Cattermole - a man Yaya Toure has admitted always makes life difficult for him - Sunderland were always going to struggle at City. Many had hoped to see David Meyler given a chance. Being viewed as a player better at breaking up opposition play than Colback or Larsson, some (myself included, despite not really rating the young Irishman) thought giving Meyler this opportunity would allow us to see what he is really made of.

Unfortunately, O'Neill disagreed, and again opted for the Colback-Larsson partnership. In doing so, he virtually relinquished the crucial space in front of John O'Shea and Carlos Cuéllar to the home side. Obviously, this was not part of the plan. O'Neill had hoped that his three more attacking midfielders were finally going to 'click', keeping the ball better and enjoying possession higher up the field.

When this didn't happen, Sunderland gifted control of the midfield to City. 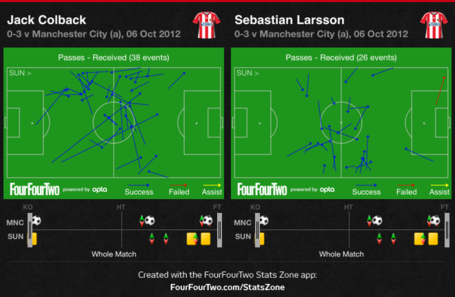 The above graphic shows where Sunderland's two central midfielders received the ball. Where Cattermole often picks the ball up from his defence and looks to move the play forward or wide, this was sorely missing on Saturday. Aside from a couple of passes to Colback, the two midfielders very rarely received the ball in deep positions.

Playing in a flat four alongside Johnson and McClean, they allowed their technically superior opponents far too much space and room to work in. Yaya Toure, in particular, was a beneficiary of this, received the ball in advanced positions and finding himself ahead of Sunderland's midfield and now facing their last line of defence. 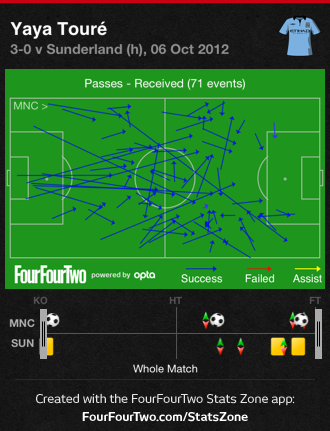 Indeed, this relinquishing of space directly resulted in the game's opening goal. With two flat banks of four employed, the Sunderland defence saw the need to push up high. When Carlos Tevez sprang the offside trap with ease, this left vast amounts of room for him to run into, and resulted in Carlos Cuéllar clumsily bringing the Argentine striker down. 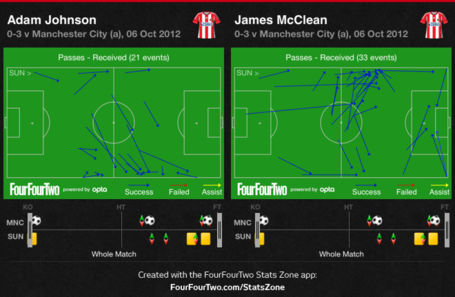 If it wasn't bad enough that the centre of midfield was missing, then the continued lack of his wingers to turn up will have infuriated O'Neill even more. There are mitigating circumstances - Adam Johnson was visibly pale before kick-off, was substituted before the end, and was violently throwing up in the dressing room even after full-time. Yet, the fact remains that neither of Sunderland's wide men has found form yet.

As shown above, they very rarely received the ball in advanced positions (the exception being McClean received the odd ball from Seb Larsson corners). This was down to both poor play - McClean's decision-making was terrible - and good defensive work from City full-backs Kolarov and Zabaleta. Each of them closed the red and white wingers down high up the pitch, forcing them either backwards or into a mistake.

Kolarov, in fact, was the game's outstanding player. His early free-kick, whipped with vicious power and curl, set the wheels in motion for a comfortable victory; the second goal came as a direct result of his surging run and cross from the left-wing. Even this, however, could have been avoided. McClean was caught dozing, allowing Kolarov to run past him and overload Craig Gardner. The graphic below shows the City left-backs passing in the attacking third on Saturday, illustrating how Mancini's side utilised their full-backs well when going forward. 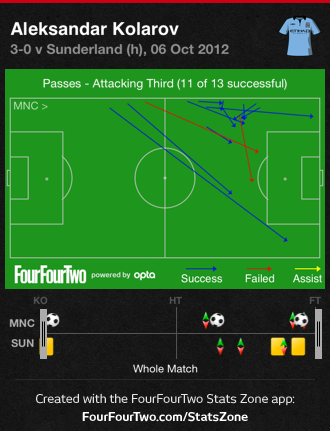 There were few positives to take from Saturday for O'Neill and co. A defeat at the champions is nothing to lament for too long - on their day, City will beat just about anyone. Mancini's men were impressive this past weekend, closing down quickly without the ball and using possession well, but Sunderland's failings were equally evident and need to be stamped out.

Simon Mignolet, Danny Rose and Steven Fletcher acquitted themselves well, but away from that there were no good performances. The most worrying factor remains that McClean, Johnson and Sessegnon continue to be non-entities on the field. Fans will be hoping this changes soon, especially with the Wear-Tyne derby up next.