We go over the 0-0 draw with Stoke City with a fine tooth-comb and see if we can see just what went wrong, went right and you never know, we might just work out the answers to our goal-scoring problems... (not likely, but worth a read anyway).

Martin O'Neill made one change from the team that drew against Newcastle United - Lee Cattermole returned from suspension at Stephane Sessegnon's expense. Stoke City remained unchanged; Dean Whitehead, Charlie Adam and Steven N'Zonzi personifying the type of battle that Cattermole had been reinstated to combat.

The first thing you notice from the players' average positions is the dynamic of Sunderland's midfield is different - not just in Sessegnon's absence. Typically you would expect the centre of midfield to be compact, as Stoke were, but it does show that whether tactically or intuitively, Sunderland looked to rectify their recent attacking troubles by getting bodies close to Steven Fletcher.

Sebastian Larsson's position depicts his comfort on the right-hand side of the pitch, and it comes as no surprise that the visitors focussed their attacks down that side, considering that Stoke's left-sided player Michael Kightly regularly drifted inside. Perhaps the only surprise is that Sunderland could not take advantage of the space afforded down the right.

The Other Side Of Frustrating

Despite how disappointing it is that Sunderland's attack is yet to ignite, defensively they are proving to one of the league's most resolute sides. A third clean sheet of the season means just eight goals have been conceded - only Arsenal can boast a better defensive record. With Cattermole back in the team, and his anchoring presence in midfield, Sunderland out-tackled their opponents with their captain leading the way with four successful challenges. The central defensive partnership between Carlos Cuellar and John O'Shea again stood tall; Cuellar assuming the role of dealing with aerial threats and his nine effective clearances in the game was over double that of any other player. 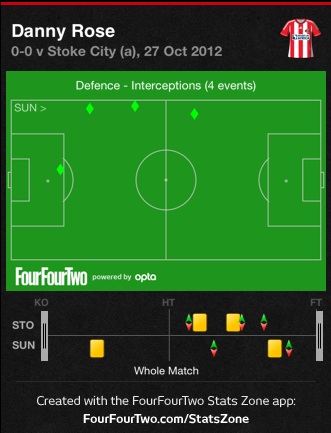 Another element in the defence which is proving key is Danny Rose's anticipation. He made a number of timely interceptions to not only stifle the right side of Stoke, which like their opponents was the preferred side of the pitch to attack, but also begin counter attacks. Rose faced the threat of the Stoke right side face on (judging by his average position in the game) and was largely untroubled. 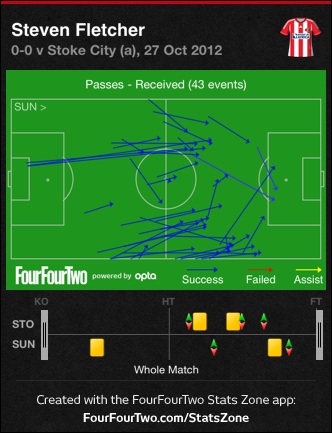 The prevalent opinion this summer - and it is one that I shared - was that once a centre-forward was found then this team would go some way to fulfilling its potential. Yet, having found said missing piece of the puzzle, Sunderland are simply not doing enough for him. Dropping Sessegnon increased the attention that Fletcher would receive, indicated by the decrease in the amount of times that Sunderland found their attacking focal point inside the opposition penalty area (just three times, whereas Fletcher had four touches in the box against Newcastle United).

Despite that, the Scottish striker almost turned another draw into something more positive but his curling effort was blocked by Robert Huth and adjudged not to have been handled.

They Defend, We Defend

Considering that both teams have almost exact records so far this season, it was to be expected that Stoke would be a difficult team to break down - even without the lacklustre visiting attack.

Adam Johnson is still finding his feet having moved from Manchester City, and he was one of three Sunderland players to concede possession on four occasions. As touched upon earlier, the visitors' defensive prowess ensured that that number wasn't the highest (Kightly lost the ball seven times) but Johnson's frustrations were increased when all eight of his crosses failed to find a team-mate. 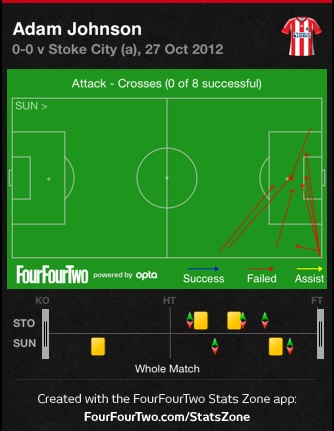 Whilst maintaining width on a relatively small pitch, both teams were unable to create many genuine opportunities to score - which is a testament not only to the defensive shape of both teams but also the work rate. Sessegnon looked to have a spring in his step having been demoted to the bench - a positive reaction that O'Neill would have noted - but the creative breakthrough still eludes him, Johnson and James McClean. The result merely perpetuates the situation; the longer that Sunderland goes without scoring, or winning, the more difficult it will be for Sunderland's flair players to retrieve lost confidence and twist and turn their way out of this slump.