Mark Metcalf, who is very well-known to our regular readers, joins us to give you a taste of his digital book 'Brian Clough - Sunderland Legend'. Mark is, of course, Sunderland through and through, as well as being a prolific producer of quality football books. Over to you Mark.

Len Shackleton: "Clough was the greatest centre-forward I ever saw."

Brian Clough is one of Sunderland's outstanding goalscorers. With 63 goals from 74 matches his goals per game ratio of 0.85 puts him second behind David Halliday, whose goals came during the much less defensive 1920s. Sadly, an injury on Boxing Day 1962 was to cut short his playing career at Roker Park and the club was to then lose out on his managerial genius by allowing him to slip away to Hartlepools United.

In my digital book on BRIAN CLOUGH - Sunderland Legend I take a look at his years at Roker Park.

It cost Sunderland £45,000 when in July 1961 they signed Clough from Middlesbrough, where he had notched 204 goals in 222 first team appearances. It was a record fee for the club and brought back memories of another famous transfer between the two clubs when in season 1904-05 Alf Common moved in the opposite direction at a cost of £1,000. A fee, which at the time, many predicted would never be exceeded.

Sunderland was seeking to regain a place in Division One, having given up, in 1958, their proud record of having never been relegated. In the 1960-61 season, Sunderland had come close to eliminating Tottenham Hotspur in the FA Cup quarterfinals, losing out in a replay after a 1-1 draw at home. Spurs subsequently went on to add the Cup to the Division One title and become the first side to do ‘the Double' in the twentieth century.

In a young side, Sunderland had two outstanding performers in captain Stan Anderson and centre-half Charlie Hurley. The latter was one of few players that Clough struggled against and in six Tees-Wear matches in which they had tangled the great goal scorer had only scored once.

Later in the 1961-62 season Clough was the beneficiary of Hurley's aerial abilities when Swansea keeper Johnny King saved three powerful headers from corner kicks and Clough snaffled up the rebounds to record another hat-trick. King was to get his revenge when he played magnificently to deny Sunderland victory on the last day of the season and allow Leyton Orient to leapfrog the Wearsiders and win promotion at their expense.

Clough's first triple for Sunderland came at home to Bury, where his marker was Bob Stokoe, a man he grew to hate for accusing him of ‘codding' (kidding) when he hurtled over the body of keeper Chris Harker on Boxing Day 1962 and ended his career.

In addition to being a brilliant goal scorer, useful with both feet, possessing great anticipation and a more than useful header of the ball, Clough was also very brave. He had a gift of being able to come away from defenders to pick up a loose ball and drive it -often intuitively - out to the wingers before getting himself into the box to get on the end of the return.

In December 1961 he scored twice in a 2-2 draw at St James' Park, both goals, particularly the 85th minute equalizer, sparking pitch invasions by delirious Sunderland fans. He later in the season helped Sunderland beat the Mags 3-0 as the side pushed for promotion.

In early 1962 Clough had a period in which he couldn't get the ball in the net and when he faced withering criticism from the crowd he was sensationally dropped for five games. He returned with a bang, scoring three times against Huddersfield Town on 24 March 1962. Two headers from close in were overshadowed by a wonderful 30-yard drive that showed he was back to his best and the following weekend he netted the only goal at Ayresome Park to help Sunderland collect both points.

Joining Clough in the first team was youngster Jimmy Montgomery, a keeper who was later signed by Forest boss Clough as an understudy to Peter Shilton at the end of the 1970s.

Clough scored his 29th League goal of the season in the 1-1 draw at the Vetch Field on the final day of the season and yet he was overlooked by the England World Cup selectors for the tournament in Chile in 1962, missing out on a chance to join team mate and captain Stan Anderson after selectors chose his former Boro team mate Alan Peacock, who never touched the same scoring heights.

Former England player Bryan Douglas recalls that Clough, during an England tour of the USSR, had lambasted the England selectors for not selecting him to play against the Soviets. Clough's most significant achievement on the representative stage was to score all five goals for the Football League in a 5-0 defeat of the Irish league in Dublin in October 1959.

The 62-63 season opened with Clough scoring twice in a 3-1 defeat of Middlesbrough, before Alan Brown signed George Mulhall to supply crosses for the lethal poacher. In October his goal, where he wriggled clear of centre-half Bill Thompson, at St James' Park helped Sunderland grab a 1-1 draw, and it again brought Sunderland fans dancing on the home turf.

Soon after Sunderland signed Johnny Crossan to pair him with Mulhall out on the left. It was George Herd though who overshadowed everybody by celebrating his two goals against Grimsby by performing somersaults in the fashion with which Kenwyne Jones later celebrated his scoring achievements at the Stadium of Light.

On Boxing Day Clough suffered the injury that virtually ended his career - it was ‘one of those grey, biting, forbidding days that only the North-East can produce' is how he described it. Torn cruciate ligaments was the diagnosis, but a broken heart was not far behind. Prior to his injury he had scored 28 goals in the 62-63 season.

He did manage to come back briefly but not till the start of the 64-65 season, by which time Sunderland had gained promotion the previous season.

Ironically his only First Division goal was against Leeds United, where he was to later spend just 44 days as manager in 1974, before he was forced to finally retire from playing. Under new manager George Hardwick he was appointed to look after the Youth Team, where he did very well but continued to upset the directors. So much so that Hardwick believes his telling the latter that Clough would be his right hand man in two years ultimately cost him an extended contract at the end of the 64-65 season.

Clough had 31,828 at his Testimonial in 1966. This was eight thousand more than Sunderland's previous League game at Roker Park against Stoke City. Allowed to leave the club the rest is history and despite approaches from SAFC directors in 1972 and the early 80s he refused to take up their offers to become manager. By the time he finished as a manager in 1993, Clough had won League titles with Derby County and Nottingham Forest, where he also captured two European Cups and two League cups. 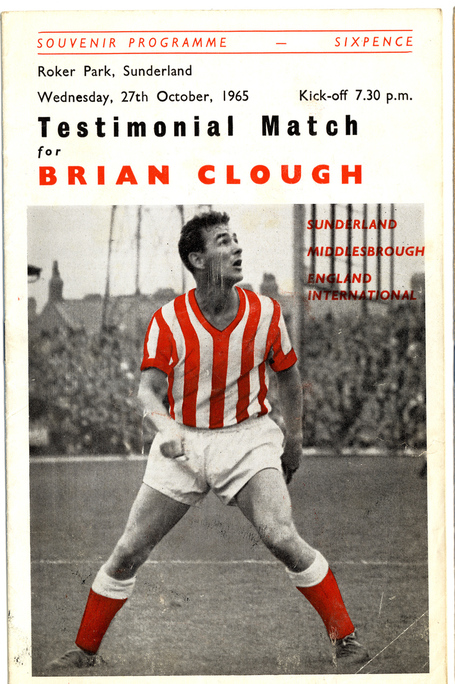 About The Author: Mark Metcalf and his son, Charlie, aged four are Sunderland season ticket holders.

Also author of Charlie Hurley - ‘the greatest centre-half the world has ever seen' and co-author of Stan Anderson - Captain of the North, Total Football - Sunderland 1935-37 and Almost the Double - Sunderland 1912-13.

Also coming out in 2013 on the digital front - books on Niall Quinn and Kevin Phillips.

If you'd like to know more and delve further into the Brian Clough Sunderland years, Mark's digital book may just be the best £1.64 you could spend. CLICK HERE and help yourself!