Once again it's time for us to take a tactical and statistical look back at the previous game, and here we do so for the 1-1 draw with Newcastle United in the Wear-Tyne Derby.

For the first time this season Sunderland enjoyed majority possession in the game, but the redeeming feature of their season so far - a stifling lack of fluidity when entering the attacking third of the pitch - remained. In what would become a role reversal of the last time the two teams met, Newcastle started the brighter away from home only to be burdened by Cheick Tiote's red card. Yet, for all Sunderland's pressure, it took a decent slice of good fortune to level late on.

With both teams reliant on one man for goals so far this season, the spotlight was on the respective midfields to see which would be more productive in supplying chances for their front men. Newcastle identified Adam Johnson as a key man for Sunderland early on; double-marking the winger at every opportunity. As a result, his dribble success was very low. Hatem Ben Arfa was the more productive right wing in this regard, completing five of seven take-ons, but actually ended up turning the ball over on more occasions (a total of 6 to Johnson's 2). Whilst seeing one of our most creative players rightfully denied space by the opposition was frustrating, Johnson was composed enough to recycle possession - either through a pass or the number of throw ins and corners he won at the end of his runs. 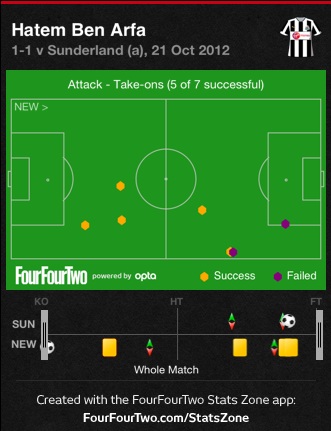 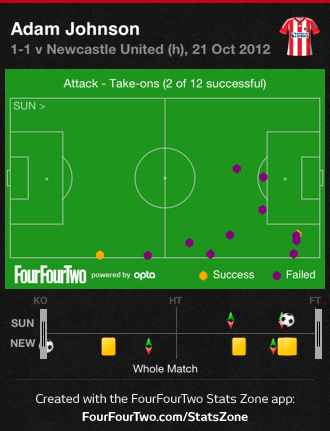 Another element of production that faltered greatly was Sunderland's crossing; even including corners Sunderland completed just nine of 41 attempted crosses. In recent weeks of this feature, James McClean's reluctance to attack his opposite man has been discussed at length, with the caveat being that if he is not constantly driving towards the byline then his crossing ability will come to the fore. Unfortunately, only one of McCClean's seven crosses found a team-mate, whilst he managed just one successful take-on. Again, however, both he and Stephane Sessegnon were most guilty for giving away the ball. 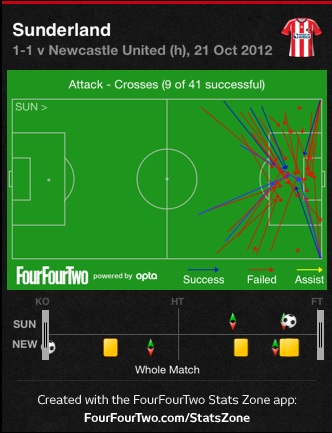 As Michael Graham tweeted during the game, a number of Sunderland players were looking to force an opening for themselves rather than making a breakthrough as a team. Arguably none were guiltier of this than Craig Gardner. The midfielder-cum-full-back had five shots - none of which were on target - and in the case of the shot at the edge of the area (see, below), releasing Steven Fletcher would have been the better option. 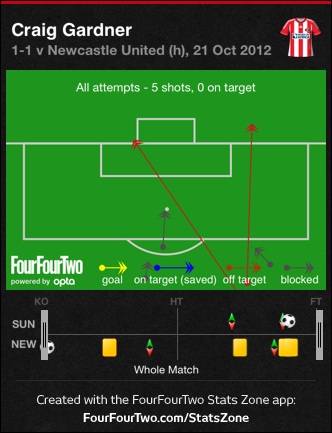 Despite his involvement in Yohan Cabaye's goal, and a second half chance that was effectively dealt with by Simon Mignolet, Sunderland managed to isolate Demba Ba for the most part. Ba was dispossessed a game-high eight times and also gave the ball away four times, but perhaps most importantly, the striker was only fouled once - preventing any reprieve for Newcastle in the second half.

Considering the possession advantage that Sunderland enjoyed - and that the composition of Martin O'Neill's team is essentially to keep its shape intact and then let the attacking players express themselves - it would be remiss not to highlight the home side's inability to present both Sessegnon and Fletcher with more possession.

The latter is understandable given his form and that Newcastle trusted its shape; retaining two banks of four in spite of Sessegnon's tendency to wander into space. Fletcher, for the most part, was left handicapped against two central defenders. But if you look at just where Sessegnon picked up the ball, then it can be argued that Sunderland were not aware enough to exploit Newcastle. Finding Sessegnon in deeper areas (the graph depicts he received possession just three times in an area between midfield and defence) simply wasn't good enough. Considering how deep Newcastle sat in the second half, much of those touches would have been in front of the first bank of four. 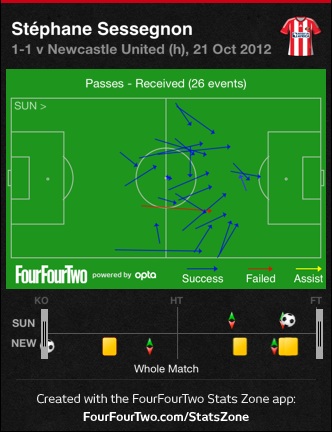 The cliché suggests that form goes out of the window in derby games, but unfortunately it did not. Although Sunderland had far more of the ball than in previous matches, they still were unable to manufacture many significant chances. Louis Saha, who took just one less shot than Sunderland's highest (Gardner) after coming off the bench, had the best chance before John O'Shea's flick-on was turned into his own net by Ba.

A key problem so far has been the inability to move the ball quickly - highlighted by the fact that Johnson was so readily double-marked despite Newcastle's bright start. In favourable situations, Sunderland players wanted to take an extra touch or two, indicating that confidence could be an issue at present.

As positives, Danny Rose is growing into the left-back spot, likewise Larsson in midfield, but the biggest is Lee Cattermole's availability for the trip to Stoke City. Given that Larsson should be retained in the team, it poses an interesting question about what to do about Sunderland's troubled trio.