It is a simple fact of life. Whoever inhabits the manager's chair at Newcastle United is unlikely to curry much favour on Wearside, that's just the way it goes. For a brief while, Sir Bobby Robson stemmed the tide. His undoubted achievements on Tyneside were hardly met with joy in red and white quarters, but at least he commanded respect. Other than he, few have enjoyed similar feeling from south of the Tyne. The current incumbent, however, seems to have achieved a rare level of dislike.

Alan Pardew is a man whom many found difficult to love (unfortunately, his mother was unavailable for comment) even prior to his arrival at Newcastle in December 2010. Yet, even since taking up the role, Pardew has somehow managed to go above and beyond the port of call. While respecting his achievements last season - and huge achievements they were - I can't help but hold the man in the highest disdain.

Now, let us be clear before we start. This will be no balanced piece. If you're looking for some sort of mitigating factors for Pardew's unsavoury elements, look elsewhere. If you're hoping for his numerous drawbacks to be balanced out with lyrical waxings about his neatly coiffured hair, this piece isn't for you.

Alan Pardew is from Surrey. I have no problem with that. In fact, I have a friend who is also from Surrey, and he's a nice enough chap. A bit vain (like Mr Pardew I suspect), yes, but other than that he's alright. He's particularly alright because he doesn't see the need to elongate every other letter whenever he tries to say the word 'Newcastle'. Seriously, Alan, if you're having that much difficulty, we on Wearside have plenty of perfectly accurate words you can call them instead. 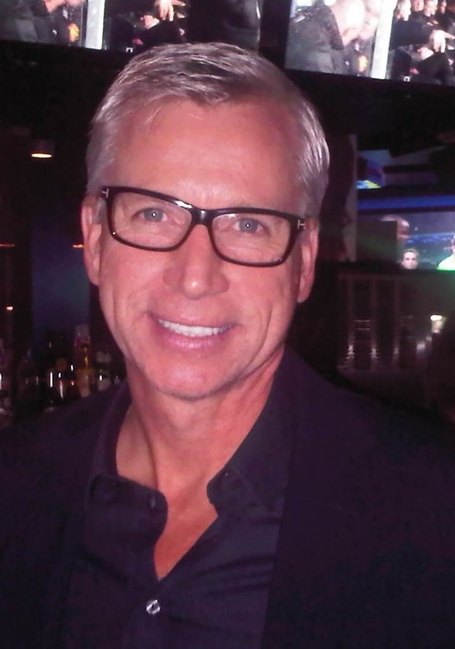 I mean, come on, is he constantly off to see a 3-D film? Do they even have glass in them? And if he needs them so badly, why does he never wear them when he's got his notebook out on the touchline, preparing his post-match comments where he'll endlessly shower the 56,000-strong "Jawdee Nashun" with praise? They're completely unnecessary Alan, and you look like Gok Wan.

Ah, the creme-dela-creme. Nothing quite sums up Alan Pardew like some good old touchline antics.

Arsene Wenger is not exactly flavour of the month in most quarters, but even he can be forgiven for refusing to shake Pardew's hand in the above clip. The then-West Ham manager is well within his rights to celebrate a goal against the likes of Arsenal, yet why does he feel the need to aggressively celebrate in his opposing manager's direction? It's not him getting caught up in the emotion of the moment, it's blatantly unprofessional.

Fast forward to last March, and we have another pleasant example of the man we're dealing with. Furious that Sunderland had had the sheer gall to actually turn up to a Tyne-Wear derby for once, and completely ignorant to the fact that Cheik Tioté had ran around kicking everything but the ball all day, Pardew reacted with - in his own words - "relief" as his side were awarded a penalty. 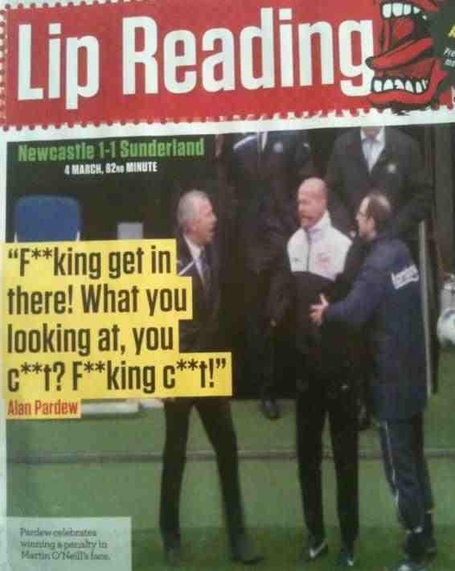 Merriam-Webster, step aside. Oxford, go home. For we have a new definition of 'relief' in The Dictionary According to Alan Pardew. In line with this new dictionary, 'relief' is not, as was previously thought, 'a feeling of reassurance and relaxation following release from anxiety or distress'. No, in this new-fangled dictionary, 'relief' is: 'launching into a foul-mouthed tirade whilst fist-pumping angrily in the direction of your opposing number after having simply been awarded a penalty kick'. We could tag on the whole 'then looking like a moron when your side subsequently misses said penalty kick', but that's a bit wordy, don't you think?

Lest we forget, this theme of touchline idiocy has continued on into this season.

In this instance, Pardew at least had the fortitude to apologise for his actions and, for that, I commend him. But unfortunately for him, there's just too much water under the bridge. He's too far gone. They should erect a metal fence around his technical area, it's the only logical thing to do.

Bigging Up Everything Without Fail

Now, this is a difficult one to critique, but hear me out. You see, over time, I've noted a tendency by Alan Pardew to seek the positives in everything. This is not necessarily the worst thing in the world if you do it for a little while, but it seems to have reached the stage whereby Pardew is simply pandering - offering up Newcastle fans little snippets of joy that they can wolf down into their oversized guts whilst simultaneously spluttering "Ah love wor manager" and covering the nearest bystander in a shower of pastry products.

Take, for example, the 0-5 defeat at White Hart Lane back in February. Having been four down at half-time, Pardew scraped the barrel and came up with this gem:

[In the second half] we showed an application and an attitude not to lose our head, not to get someone sent off.

It's that last one I like so much. We didn't kick 'em. You're coaching a bunch of grown men Alan, not a squad of nine-year-olds in the Russell Foster League. Not kicking them because they've had the temerity to turn you over should probably be achieved without the need for praise.

He then, of course, went on to praise the fans for sticking with them all game, and singing their cholesterol-ridden hearts out. Fair enough, you might say, but the statement begins to lose its weight a little when you make it every single week. Indeed, as I noted on this week's RR Podcast, even some Newcastle fans have begun to tire of their manager's relentless pursuit of positivity, arguing - not unconvincingly - that it offers his players an excuse when they don't perform in the manner they are expected to.

Criticising a man for his ego may seem a harsh thing to do. An ego is a sign of confidence, a sign of belief from a man who has the accolades to go alongside it.

Yet, Alan Pardew falls down in the latter instance. Even before notching the LMA Manager of the Year Award last season, Pardew always gave off a smug demeanour. That's why he was so infinitely dislikable even before he arrived on Tyneside. Prior to his stint at Newcastle, his 'honours' list as a manager read as follows:

Not much to look at is it? Especially when we consider that, at West Ham, he had a squad that should never have really been relegated in the first place, yet it still took him two years to get them up. By comparison, Mick McCarthy's team - consisting of such world-beaters as Steven Caldwell and Chris Brown - secured promotion in a victorious visit to, you guessed it, Alan Pardew's West Ham. After a losing FA Cup Final trip, he embarked upon the club's worst losing run in over seven decades and was sacked.

At Charlton, Pardew took over with the Addicks 19th in the Premier League and was entrusted with the job of steering them clear of relegation. They were promptly relegated. An expected promotion challenge never came, and a poor start to the next season soon had fans calling for his head. 'Mutual consent' was the term used this time around.

At Southampton he found himself unable to take them up from League One, a feat Nigel Adkins went on to achieve at the first time of asking. It should be noted that Pardew left the Saints amid rumours of "low morale" throughout the club - perhaps that's why he praises everything that happens in Nuucaaarselll?

Anyway, it would seem that last season was very much the exception rather than the norm for Alan Pardew. Yet, he's still had the audacity in recent weeks to entertain the idea of becoming England manager and claim his side were now - on the back of one season - in a different league to Premier League stalwarts Everton.

Even Google Has Nothing Nice To Say About Him

Honest, it doesn't. Type "Alan Pardew" into the world's most commonly used search engine and just look at the highly positive character indications that come up below in the suggestions box: 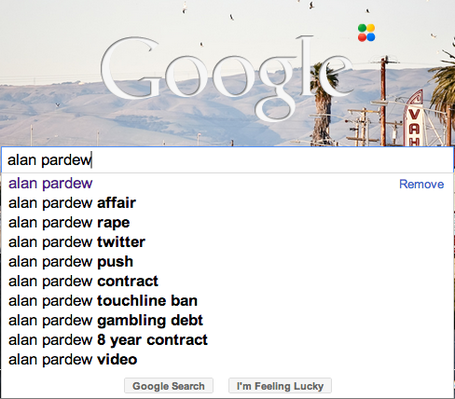 Given the number of accusations levelled at Pardew in public and private, we could be here all day. Various rumours surround his numerous sackings, and indeed his arrival at Newcastle United. None of them pleasant, none of them reflecting well on the current Magpie gaffer. The thing is, I don't really fancy getting done for libel, so perhaps it's best we stop there...

But, deep down, he's a canny bloke, yeah?