This Sunday lunchtime sees the 146th tussle between Sunderland and Newcastle United and, as has likely been the case the previous 145 times, much of the pre-match talk is of "passion," "nerve," and whether or not the sides are going to be "up for it". Yet, amidst all the fighting talk, we would do well to remember that this remains a football game like any other. With that in mind, we thought we'd do what we did prior to last March's fixture, and give something of a tactical preview ahead of Martin O'Neill's showdown with Alan Pardew.

Newcastle, almost certainly, will start with a 4-4-2 formation. This has been the starting choice of Alan Pardew in six out of seven league games so far this season - though he has not always ended matches with the system he began with. Given that his one move away from this was the 2-2 draw at Everton, a game in which the Magpies were extremely lucky to salvage a point, it is unlikely that he will opt again for the 4-2-3-1 system he used at Goodison Park.

Instead, the black and whites will bring a fairly rigid system to the Stadium of Light this weekend. Pardew finds himself victim to a strange paradox. In order to keep a key player happy, namely Demba Ba, he must sacrifice the 4-3-3 formation that worked so well in the latter stages of last season. Yet, Ba now thrives in the current 4-4-2, while playing partner Papiss Cissé has gone off the ball - prompting fears he may soon take up the role of the unhappy party.

Whatever the effect on personnel, Pardew's current formation is one that has produced distinctly average football, but decent enough results. Newcastle's only two defeats this term have came against title challengers Chelsea and Manchester United. Meanwhile, the side has shown good will to get back into games where they have fallen behind - for example, at Everton and Reading, and at home to Aston Villa. 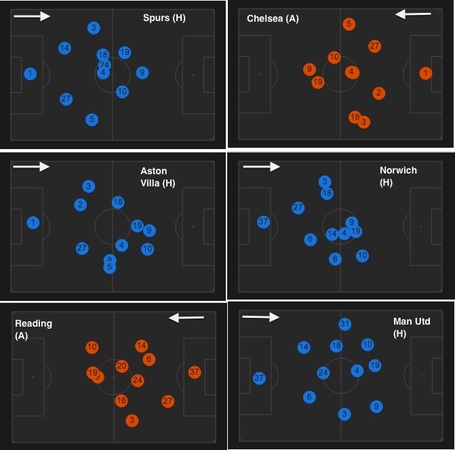 The above graphic shows the average positions of Newcastle players in the six league games this season where they have lined up in a 4-4-2. What is notable, and was pointed out when we did a preview for March's derby is how narrow the side is going forward.

In some ways, this narrow approach is to be expected. In each of these six games, Pardew has deployed inverted wingers - the right-footed Jonas Gutiérrez on the left, the left-footed Hatem Ben Arfa on the right. This ties in with the analysis offered up by WhoScored, where it is said that Newcastle's main strength currently is 'creating chances using through balls'. 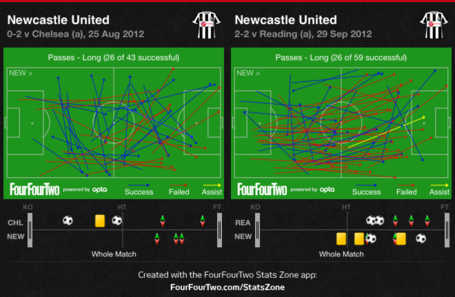 What this has also led to, however, is a tendency to use the long ball. Now, let us be clear here, this is not always the aimless hoof of a long ball often associated with the likes of Stoke or, priorly, Wimbledon. For example, as shown above, Yohan Cabaye's assist for Demba Ba at Reading was counted as a 'long ball' because of its range, when in reality it was an excellently placed through ball.

But, it remains that this use of the long ball could play into Sunderland's hands. John O'Shea and Carlos Cuéllar have been positionally sound for the most part this season, and lofted balls into the box have usually been dealt with in much the same way they were at last season's Tyne-Wear derby. Provided the midfield clears up the second ball - something made harder in the absence of Lee Cattermole - Sunderland should be able to repel Newcastle's narrow attacks. If that is the case, the Magpies will have to rely on individual brilliance to create something.

Unsurprisingly then, Newcastle give very little emphasis to getting the ball wide in advanced positions. With their two wingers cutting inside, and Tioté and Cabaye perennially seeking the killer through ball, they rarely seek to trouble opposing full-backs. 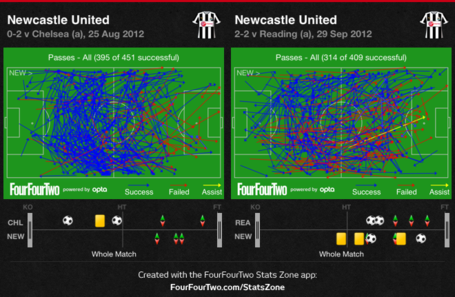 As shown above, in the two away games that Newcastle used 4-4-2, they have rarely looked to get into advanced wide areas. This is most clear in the Chelsea game, whereas there is an improvement against Reading. Still, though, it remains that this is something Sunderland can look to exploit. 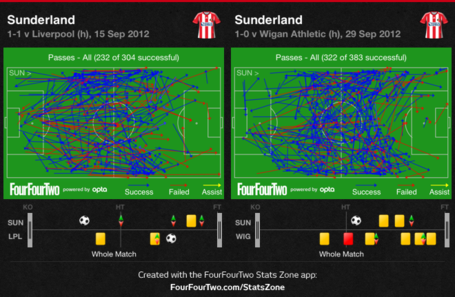 Unfortunately, in neither of their two opening home games have the Black Cats managed to be active in those same areas. This is more down to individual problems - Martin O'Neill wants his side to attack with width, but James McClean and Stephane Sessegnon have yet to start firing this season.

Should they do so on Sunday, the home side could see joy, as few would bank against Steven Fletcher given the current run of form he is in. Yet, Fletcher will not have it easy. Much of Newcastle's reluctance to lose this season has been down to a resolute back four. In particular the central defence has held well (much like Sunderland's), with the below graphic showing the sheer number of clearances made by Mike Williamson and Steven Taylor at Reading. 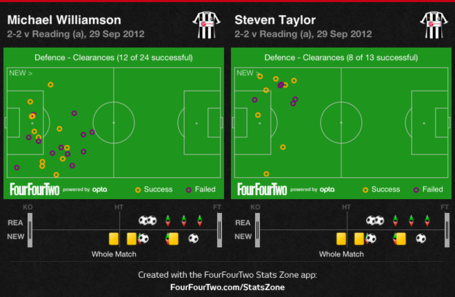 Of course, while Newcastle do boast a number of good players, there is one who is more revered on Tyneside than most. Hatem Ben Arfa is undoubtedly a supremely talented footballer, showcased in his individual goals against Blackburn and Bolton last season, but this year he has yet to really fire. His equaliser against Aston Villa was excellent, but other than that he has struggled to regain the form he had at the start of the year.

But he still remains a threat - particularly if Alan Pardew chooses to revert to a 4-3-3 formation. 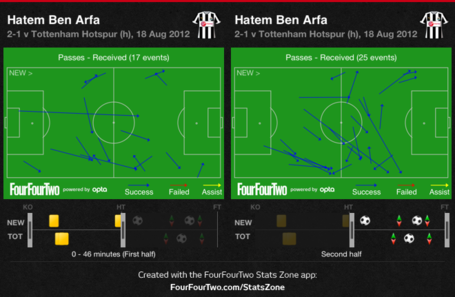 Above is a comparison of where Ben Arfa received the ball in the first and second half of the season's opening game against Tottenham. In the first half, deployed in a 4-4-2, he is much more reserved. Then, in the second half and following the formation change, Ben Arfa continually receives the ball in more advanced positions. This was made possible by the moving of Cheik Tioté into a deeper position - Newcastle went on to play far better in the second half.

However, this game represented the exception rather than the norm for Ben Arfa so far this season. The mercurial wingman is no stranger to mazy dribbles, but he has seen little success with them thus far. He has been dispossessed more frequently than any other Newcastle player this season - 24 times, an average of about 3.4 times per game. If Sunderland can stop him in his tracks before he builds up any real momentum, Ben Arfa will likely be quiet again this Sunday.

As usual with derbies (April 2006 and October 2010 notwithstanding) this is likely to be a tight affair. Neither side has really fired going forward yet this season, with each over reliant on a single striker (see Fletcher, Steven; Ba, Demba).

Conversely, each side has looked well organised in defence. It will be interesting to see how Sunderland's back line copes against an attack that overwhelmingly looks to find holes and play balls through them, with strikers playing on the shoulder of the last man and little width employed.

If they can deal with that, Sunderland should be able to capitalise. Newcastle's reluctance to attack with width means that, when their moves forward do break down, Sunderland will have the opportunity to overload opposing full-backs. This will rely hugely on McClean and Johnson returning to form.

Perhaps the most intriguing tussle has been given no mention at all here. Stephane Sessegnon has atonement on his mind following his last meeting with Cheik Tioté, and whoever wins that particular tussle could determine the game's result. If Sessegnon is crowded out, Sunderland will struggle to build attacks. However, if he can exploit space in the way he did in the first half of both derbies last year, Wearside could be very happy come Sunday evening.

All graphics and statistics taken from WhoScored and FourFourTwo's Stats Zone app.