Sunderland won their first league game of the season at the fifth time of asking on Saturday. The performance at home to Wigan Athletic left some fans concerned, but there remained plenty of positives to take from the 1-0 victory.

So, we're off and running. Sunderland nabbed their first league win of the season on Saturday, overcoming a dogged Wigan Athletic side in a 1-0 victory.

The performance though, left many concerned. Only after Wigan were reduced to ten men did Sunderland put themselves in front, and even with a man advantage, they struggled to truly control the game. That said, it was an important victory for the Black Cats - and they now boast a seven game unbeaten streak in all competitions. 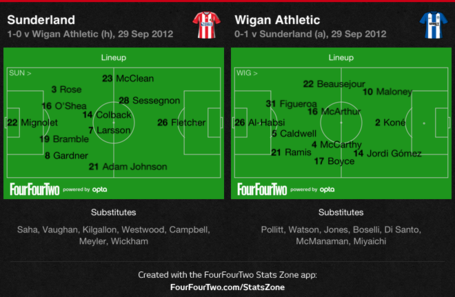 Sunderland were left without the services of captain Lee Cattermole after his midweek dismissal, but were lifted by the return from injury of Adam Johnson. Martin O'Neill has alternated recently between a 4-2-3-1 system and a 4-4-1-1 - this weekend past he opted for the latter.

Stephane Sessegnon was handed the task of linking midfield and attack by occupying the role in behind lone striker Steven Fletcher. As a result, Sunderland's midfield resembled much more of a 'flat four' than has often been the case: James McClean and Johnson took up residence out wide, while Seb Larsson accompanied Jack Colback in the centre. At the back, Simon Mignolet was shielded by a defence of Danny Rose, Titus Bramble, John O'Shea and Craig Gardner.

As for the away side, Roberto Martinez opted again for his unique 3-4-3 formation. Ali Al-Habsi lined up in goal, with a defensive three of Maynor Figueroa, Gary Caldwell and Ivan Ramis ahead of him. Jean Beausejour and Emmerson Boyce were deployed as wing-backs, with James McCarthy and James McArthur in the middle. Up front, target man Arouna Koné was flanked by Shaun Maloney and Jordi Gomez.

A Disappointing Opening Half

In truth, Sunderland could count themselves fortunate to be level when the half-time break came. The visitors had the better of their hosts throughout the first 45 minutes, with only the brilliance of Simon Mignolet keeping the Latics off the scoresheet. 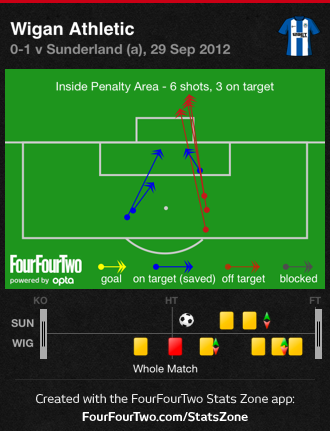 As has been well documented, Sunderland have gifted opponents plenty of shots thus far this season. However, a vast amount of those have either been blocked or came from outside the area (or both), whereas in the opening half on Saturday Wigan saw plenty of opportunities arise inside the home penalty box. Were it not for Mignolet's world class save from Koné after quarter of an hour, the Latics would have led.

One of the main reasons for this was the absence of Cattermole. When he plays, the Sunderland captain does an excellent job of patrolling the area directly in front of his centre-backs, as well as limiting the opportunities for sides to quickly spray the ball wide. Without his presence, Larsson and Colback offerred up a much less commanding display defensively.

The two central midfielders all too often moved together as one - as opposed to one player sitting deep while the other advanced. In a side where the other three midfielders are all primarily attack-minded, this unsurprisingly left Sunderland exposed when without the ball.

The sending off of Jordi Gomez just two minutes after half-time had a huge influence on the game. It left Wigan unable to control the game as they had previously and, despite how Sunderland didn't dominate, they looked relatively comfortable when closing the game out.

There were other subtle differences too. 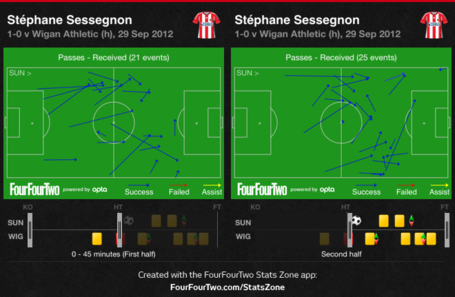 The above graphic shows where Stephane Sessegnon received passes in the first half (on the left) and the second half (on the right). In the opening 45 minutes, the attacking midfielder drops noticeably deeper to pick up the ball. With Sessegnon yet to fire on all cylinders this season, this caused some problems. It left him with more Wigan men to get through before he could link up with Fletcher, whilst simultaneously encouraging Vaughan and Colback to break forward and get ahead of him. Then, when moves broke down, this left Sunderland hugely exposed in the centre of midfield.

In the second half, Sessegnon was more advanced, and the side's shape was better overall. He showed glimpses of returning to his best form, and will have been pleased with his contribution. 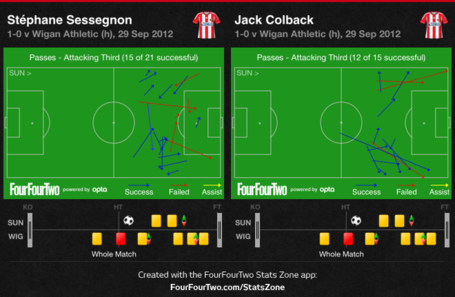 Sessegnon topped the number of successful passes in the attacking third (for either side), followed closely by Jack Colback. Much of these successes came in the second half against a depleted Wigan side, but, still, credit must be given. Colback is sometimes seen as ineffective when going forward, yet his performance in the second half on Saturday suggested this might not always be the case. In another small positive, the introduction of David Vaughan as a substitute saw the Welshman play with drive and purpose going forward.

Steven Fletcher - Not Just A Goalscorer

One of the main positives from Saturday - other than the three points of course - was the all-round play of Steven Fletcher. In recent weeks, having been prolific in front of goal, some have seen fit to compare the Scotsman with Darren Bent.

What Saturday showed is that Fletcher is much more than a goalscorer. This has already been alluded to in previous Talking Tactics articles when discussing how Fletcher's aerial prowess improves Simon Mignolet's distribution (a trend which continued again at the weekend), but what is most impressive about Fletcher is his movement. 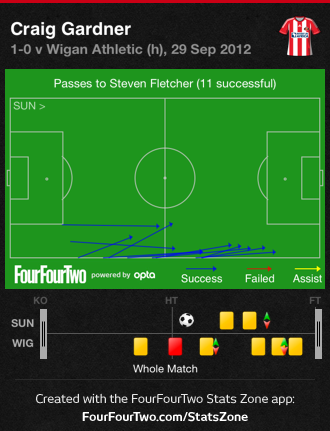 One of Sunderland's most prominent passing combinations on Saturday was that of right-back Craig Gardner knocking the ball to Fletcher, with the striker moving out wide to receive the ball. As stated, Stephane Sessegnon is yet to really get going, but should he do so this movement from Fletcher will create gaps for the little man to get into. Furthermore, with Adam Johnson a right winger who prefers to cut inside, the movement of Fletcher allows for this type of attack to occur - and hopefully confound opposing defences.

Despite the reservations of some, Sunderland are slowly but surely getting themselves going. The opening half on Saturday left a lot to be desired, but there remained plenty of positives. Danny Rose looks increasingly assured at left-back, while Titus Bramble was excellent in central defence - contributing five clearances and a 100% success rate in aerial battles.

Adam Johnson was quiet and the side missed Cattermole's commanding presence, but all in all Saturday was a good win for Sunderland. They now must travel to league champions Manchester City, where the hope is that the defence continues its good start to the season, and the attack really begins to gel.