Sunderland and Martin O'Neill recorded their fifth win in eight league games on Saturday, overcoming an adventurous Swansea City outfit 2-0 on Wearside. The visitors arrived at the Stadium of Light determined to reproduce the slick passing performance that had seen off Arsenal in Wales last week, but a tactically astute display from the home side meant Brendan Rogers' men returned home empty-handed.

O'Neill made just a solitary change from the side that were unfortunate to lose 1-0 last week at Chelsea. With Matthew Kilgallon injured, Wes Brown's return to fitness saw him thrust straight back into the starting line-up at centre-back, partnering fellow ex-Manchester United man John O'Shea. Nicklas Bendtner led the line once more up front, though he himself left the field injured in just the 12th minute - Connor Wickham was his replacement for the rest of the game.

As a result, the Wearsiders lined up in their now familiar fluent form of 4-4-1-1/4-4-2. Stephane Sessegnon's roaming role meant sometimes he dropped deeper, between the lines of the Swansea midfield and defence, while on other occasions he looked to partner the young Wickham in a more advanced role. Once again, Sunderland wingers James McClean and Seb Larsson had to be at their best defensively, with The Swans' 4-4-2 formation relying heavily on attacking via wide areas.

Swansea City have surprised many this season by carrying on from where they left off in the Championship last year. Achieving promotion through being focused upon an efficient and inventive short passing game, the Swans have decided not to sway from this ethos now that they occupy the top league. Other teams that have tried similar have notably failed - with West Bromwich Albion a particular recent example - but, to their credit, Brendan Rogers' side have proven plenty wrong thus far.

Sunderland, well aware of this, looked immediately to test their visitor's credentials. The opening exchanges saw the hosts start at a frenetic pace, pushing high up the field and pressing the opposition player on the ball at every opportunity. Of their 21 interceptions in the game, the Black Cats completed 7 (one-third) of them in the opening twenty minutes.

O'Neill's men soon learnt that this was a fairly fruitless task. Though that first twenty minutes saw them take the lead through Sessegnon's superb curling finish, it also witnessed the visitors grow into the game and impose themselves steadily. They were able to create triangles around Sunderland's pressuring players, passing themselves out of trouble without losing possession.

It must be said, however, that this sometimes bordered on the extreme. Goalkeeper Michel Vorm, for example, misplaced just 3 of his 31 attempted passes. This sounds impressive, and perhaps it is in some respects, but there were times when his sheer reluctance to send the ball long put his defenders under great pressure. Of Vorm's 10 goal kicks, just a single attempt went "long", with the Swans much preferring to build attacks from the back.

Sunderland, realising that trying to snatch possession at every opportunity would simply see them exert vast amounts of energy for little reward, dropped off. Where in recent weeks they have done this willingly, Saturday's display more suggested the move was imposed on them by the visitors - however it was still an astute tactical adaptation from the home side. 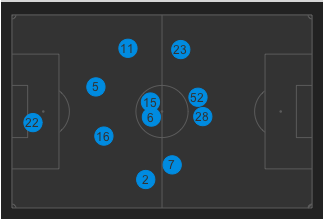 The red and whites thus allowed Swansea to control the play. As shown by the above graphic (this depicts the average position of each Sunderland player throughout the game - number 52 counts for both both Bendtner and Wickham) Brown and O'Shea fell deeper, covered by central midfielders Vaughan and Cattermole. The latter two also, interestingly, went very tight alongside one another, thus blocking any way through the middle and forcing Swansea to take their attacks wide. With Scott Sinclair and Nathan Dyer - both very tricky players - occupying the wings, this was a bold move by Martin O'Neill. 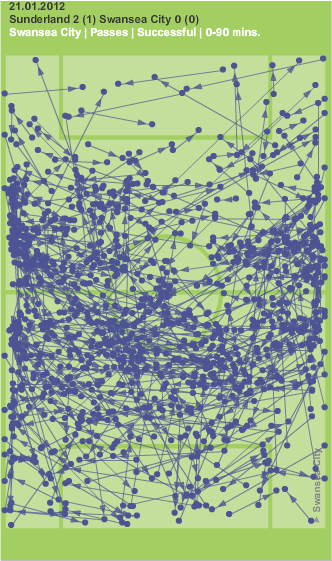 A look at the above chalkboard, depicting Swansea's successful passes in the game, confirms the Ulsterman's judgement. As seen, there is a scarcity of activity in the centre of the field, while a deluge of passes take place in and around the wide areas.

However, two things are notable. First, despite the wealth of activity on the left and right, very little of Swansea's successful play comes from the byline. Through McClean and Larsson doubling up with respective full-backs Bardsley and Richardson - a frequent O'Neill ploy - Rogers' men struggled to break through the final line of the Wearsiders' defence.

Secondly, despite their huge amount of possession and passes, Swansea were largely ineffective with it. The Swans completed 631 of 736 attempted passes - the Black Cats managed just 226 from 337 - yet were successful in only two of their actual attempted crosses into the area. In contrast, in a statistic that underlines the more clinical nature of the home side, Sunderland, despite clearly attempting far fewer passes, were successful in double the number of crosses (four).

Possession Is All Well & Good, But Goals Get Points

The above phrase is perhaps pinned up on the Stadium of Light home dressing room wall.

Many commentators on Saturday's game opined that Swansea "dominated" for large periods of the game, but how much can a side be said to have dominated when they don't test the opposition goalkeeper regularly?

The above graphic shows the two respective shooting zones of each side on Saturday. As can be seen, the Swans, for all their possession and slick play, were mostly limited to long-range efforts. On the contrary, Sunderland were much more economical, with 60% of their attempts coming inside the 18 yard box.

This is not merely a manipulation of statistics either (ie. Sunderland did not have vastly fewer shots than Swansea). The Black Cats made just one less attempt on goal (15) than their opponents (16), with each side managing just three attempts on target. The difference was, Sunderland converted two of their three.

Undoubtedly the duel of the day came down Sunderland's left side, where Kieran Richardson was faced with the task of keeping Nathan Dyer quiet. Dyer looked lively once more on Saturday - to the point that the Setanta commentary team awarded him 'Man of the Match' honours - but, in truth, Richardson handled his task extremely well. 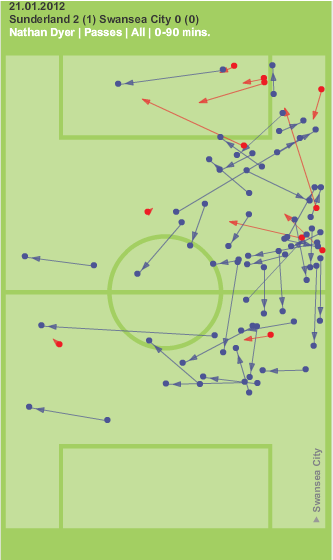 The above shows Dyer's passing board for the weekend's game, and is notable for how - with one exception - his successes end (at times, literally) on the edge of the 18 yard box.

Dyer's sole successful completion in a dangerous area came in the 11th minute. Richardson fell asleep, allowing the winger to drift past him, crossing for Scott Sinclair - who should have done much better with his attempt on goal. 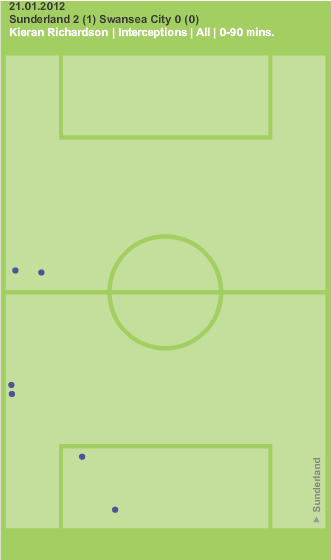 Aside from that error though, Richardson was excellent. He contributed 6 of his side's 21 overall interceptions, was successful with 75% of his challenges, and also made 7 of Sunderland's 24 defensive clearances.

Credit too, must be afforded to his fellow full-back Phil Bardsley. As Roker Report's Michael Graham accurately tweeted following the game, Bardsley's defensive weaknesses have always been positional rather than in one-on-one situations. This rang true again on Saturday, as when he joined Richardson in switching off, that Dyer cross was able to find an unmarked Sinclair.

Aside from that though, he reinforced his reputation for being hard to take on in an individual duel. The chalkboard below details the failed 'take on's by Swansea on Saturday - the heavy activity on the left shows how successfully Bardsley nullified the man often seen as Swansea's most important player. 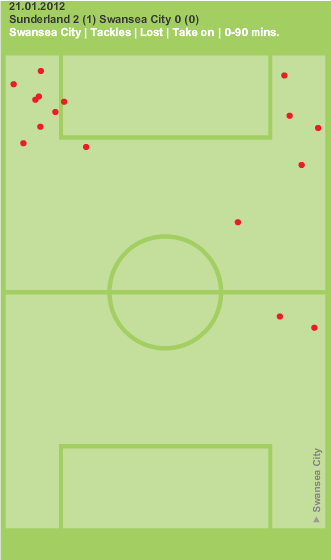 This was, once again, a game where Sunderland were fairly happy to let their opponents play with the ball as much as they liked - provided it was in territory that was dictated on the Black Cats' terms. 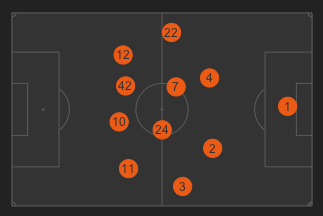 As shown above by Swansea's average positions in the game, their wingers played so far forward that they were effectively third and fourth strikers. Yet, it is notable that both wide men have been forced inside somewhat, no doubt by Sunderland's "doubling-up" tactics, and thus their threat and room to be creative was instantly nullified.

Furthermore, that above graphic shows just how tight together the whole Swansea team was, from front to back. This high line of theirs not only restricted the play itself overall - especially with Sunderland only willing to go back as far as they themselves were happy to - but left them susceptible to the counter-attacking football that has become the hallmark of the Black Cats recently.

This piece has focused a lot on the activities of the visitors - and for good reason. Sunderland boxed clever on Saturday. They realised the Swans lacked a truly effective frontman, and put faith in their own wide players to stop any real threats making their way through, while also condensing play in the middle of the park. They were prolific once more when attacking and, once it became clear Swansea had punched themselves out of ideas, they capitalised and sealed the game.

At times the side looked leggy, and they gave away possession more readily than many would have liked - thus making their counter-attacks look a lot more stale than recent weeks - but overall this was an adaptive and successful tactical display from Martin O'Neill's side.

All graphics and chalkboards courtesy of whoscored.com and Guardian.co.uk