Share All sharing options for: Talking Tactics: Norwich City (A)

In last week's Talking Tactics feature, the general gist was 'what a difference a week makes'. The same can be said of this week. Where was the energy, urgency, and dynamism the same 11 players produced against Stoke last week?

With both clubs picking up good first wins the previous week, both Paul Lambert and Steve Bruce named unchanged teams. For Sunderland, this meant the captain Lee Cattermole again had to be content with a spot on the bench. The system also remained unchanged from the rather rigid 4-4-1-1 that Bruce has favoured all season.

Where the game was lost

Clearly, the Sunderland staff had identified Norwich playmaker Wes Hoolahan as the main threat and looked to box him in and deny him space by playing very narrow. Without the ball, the central midfield pair of Gardner and Vaughan dropped deep to try and squeeze the Irishman out of the game. 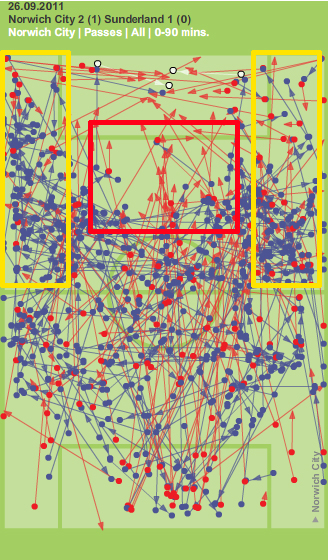 As highlighted by red box, the 'cage' deployed around Hoolaham was effective in preventing him receiving possession in a position from which he could attack the Sunderland centre backs. Vaughan and Gardner were able to cut off the supply into his feet whilst any resultant long balls were easily dealt with by Brown and Bramble behind them.

But with the Hoolahan option largely denied to Norwich, they instead filtered the ball out wide to pretty devastating effect. Norwich's full backs Tierny and Naughton supported their wingers and, with Gardner and Vaughan committed to dealing with Hoolahan, Elmohamady and Larsson offered nothing but desperately inadequate.

The result of all this was that the Sunderland full backs were swamped and unable to stem the tide with Norwich happy to reap the rewards of their endeavors and help themselves to two goals created from wide. When John O'Shea and Kieran Richardson were able to win the ball, they would find support badly lacking and often having to resort to long hopeful balls.The game being filtered down the Sunderland flanks can be well illustrated by O'Shea's massive 105 attempted passes, and the inability to deal with it illustrated by the uncharacteristic wastefulness of O'Shea's 33 failed attempts to find a team mate, almost exclusively with long passes. 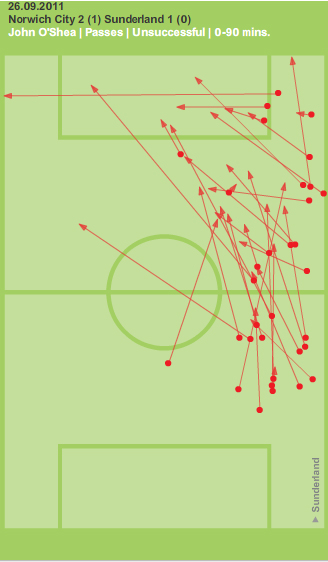 What made this game especially frustrating was that Sunderland showed they had enough quality to dominate the game, and yet never once looked bothered enough to make it count. Complacency reigned supreme. The first of these positives was Niklas Bendtner offering an outlet for Sunderland the like of which we have rarely seen at the club since Niall Quinn himself was leading the line. The Dane's ability to show for the ball, collect it, and bring his team mates into play was top class, and deserved considerably better reward than it got. 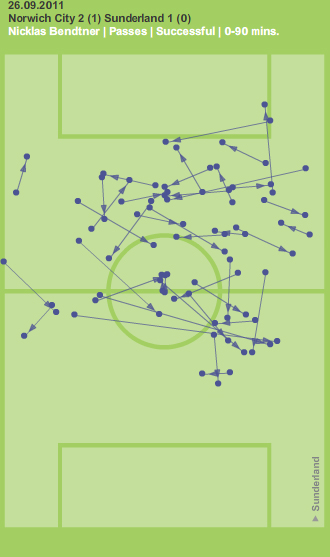 But for all Bendtner's quality, no one in a Sunderland shirt ever really threatened the space behind the Norwich centre halves that he dragged out of position, and that made for a comfortable afternoon for the Canaries.

The main beneficiaries of Bendtner's performance were the midfield, who saw a large increase in how much of the ball they received. Most of us were hugely impressed with David Vaughan's passing figures last week against Stoke, but at Carrow Road he enjoyed had even more opportunity to use the ball. He, once again, used it efficiently with a completion rate of 82%, but his pitch-map only serves to highlight the lack of incision Bruce's current squad seems to have by showing a plethora of sideways and backwards passes in front of the Norwich defence but nothing through it. 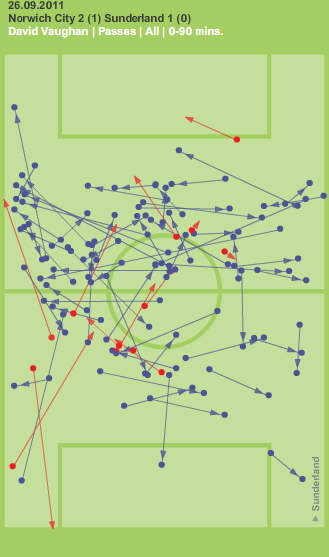 All in all it was a soul-crushing return to what has become the painful status quo of 2011. Some obvious quality in the team but lacking one vital ingredient - an incisive and pacey forward to attack space behind the oppositions centre backs. For Niklas Bendtner to put in as good a performance as he did yet the Norwich defence to have such an easy night is criminal, and it once again serves only to remind us that what Darren Bent offered the team has not been anywhere near adequately replaced. Whilst it isn't a total lost cause, it is all very frustrating, and you have to be fearful of a long hard slog until Asamoah Gyan can be replaced in January.