Cliches are, by their very nature, repetitive and nauseating. And yet when discussing Sunderland's 4-0 victory over Stoke City, it is hard not to be drawn to one: what a difference a week makes. Seven days ago the Black Cats were reacting to their second consecutive home defeat and still winless this season, whilst now they find themselves looking upwards once more following a convincing win against The Potters.

Though no drastic change in system was forthcoming from Steve Bruce, the red and white personnel did see a difference from last week's defeat against Chelsea. Out went Lee Cattermole, the captain, dropped after a series of ineffective performances. In his place came David Vaughan, the man signed from Blackpool in the summer transfer window. Perhaps more unfortunate to miss out was Jack Colback; Ahmed Elmohamady found himself preferred this time around. The only other change came in the shape of John O'Shea who, in replacing the suspended Phil Bardsley, also took over Cattermole's captain's armband.

The visitors, meanwhile, lined up in a relatively inflexible 4-4-2. New boys Peter Crouch and Cameron Jerome led the line up front, looking to be supplied by wingers Matthew Etherington and Jonathan Walters. With ex-Sunderland men Rory Delap and Dean Whitehead in midfield, Tony Pulis' side weren't exactly looking for vast amounts of creativity in the middle of the park. Instead they hoped those two would break up any of the home side's attacking play, and relied on their defenders and the aforementioned wingers to supply the front two.

One of Stoke's more notorious tactics is that of Rory Delap's devilishly long throw. Back in February when Sunderland travelled to the Britannia Stadium, the Wearsiders had a visibly torrid time attempting to defend Delap's missile-like throws. Ultimately, though not without help from a lenient referee, the home side wore Steve Bruce's men down, and came away with a 3-2 win.

So, knowing full well the threat such a throw poses, Bruce needed to ensure he had a gameplan to negate it yesterday.

This came in two forms. Firstly, Simon Mignolet was instructed to more proactive than Craig Gordon was seven months ago, and look to be the first man to meet the throw where possible. Although at times it was hardly pretty, the Belgian was successful with each and every attempt to get a hand on the throw before a Stoke head, and then relied on his defenders clearing the second ball.

The second tactic to combat Delap was Bruce's decision to bring striker Nicklas Bendtner into the home penalty area to help out with the defensive effort. Standing six feet five inches tall and considerably better in the air than he is often given credit for, the Dane was influential in nullifying Delap's threat. Of the game's ten attempted long throws, Bendtner was responsible for clearing 40% of them; indeed, all such clearances game from within eight yards of the crowded Sunderland goal – a statistic which shows the importance of Bendtner's aerial presence there yesterday.

So effective were Sunderland in reducing this threat that Delap, showing nothing with the ball at his feet or in his hands, found himself taken off in the 71st minute. In fact, as shown below, not one of his ten long throws found a Stoke player at the other end. 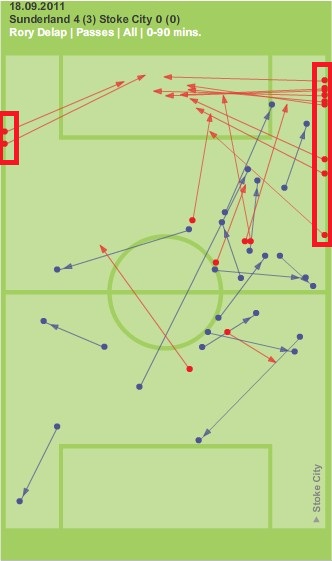 Though it is hardly fair to prioritise individuals over the team when discerning potential dangers, it is undeniable that, alongside Delap, Stoke's most obvious threat comes in the form of the seemingly immeasurable Peter Crouch.

The Potters' new boy had a fairly miserable time of it on Sunday, much of which was down to a tactic from the home side that was both odd and effective in equal measure.

Knowing full well that Crouch was likely to win the majority of the many aerial balls pumped up to him by centre-backs Woodgate and Shawcross, the Black Cats were happy to let the Stoke striker take the ball down with his chest unchallenged, before then nipping in and stealing possession once the ball hit the ground.

Of the sixteen long passes that Woodgate and Shawcross sent cascading into the Sunderland half, Crouch was successful in getting on the end of eleven of them, but it was the next stage of attack where the visitors had difficulties. 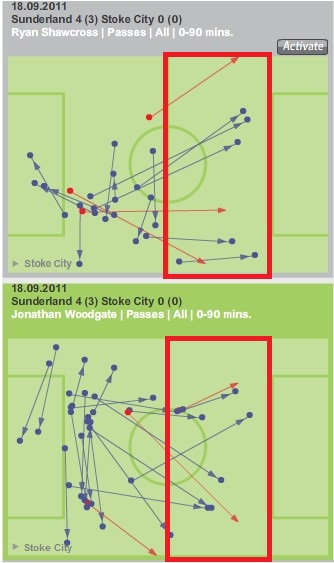 With Cameron Jerome fairly anonymous throughout, and often much too far away from his strike partner, flicking the ball on was never really an option for Crouch. Instead he was left to basically fend for himself, and Sunderland took full advantage of this.

The most usual perpetrator of thievery from Crouch was the excellent David Vaughan. Unlike the man he replaced, Lee Cattermole, Vaughan's preferred tackle is one whereby the ball is nicked from under the nose of the possessor, as opposed to Cattermole's all guns blazing approach.

As a result, Vaughan usually came away with the ball still in his own possession, and he was supremely astute with the ball at his feet yesterday. 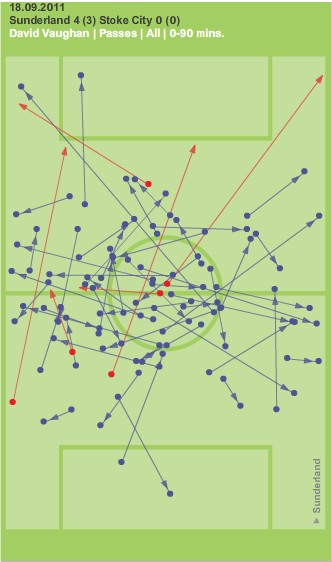 As shown, the ex-Blackpool man was rarely wasteful, proving both incisive and economical in equal measure. He found a Sunderland man with 51 of his attempted 57 passes.

What cannot be seen in the above chalkboard, but which was of even more importance, was Vaughan's speed in moving the ball on. Never wishing to dither, he seemed to know where his next pass was headed before even gaining possession, and his swift play was key to slick movement and passing that led to Sunderland being so profitable in front of goal. Craig Gardner's goal, though it took a fortuitous deflection over Asmir Begovic, came as a result of impressive interplay between the Sunderland midfield, in a move which was kick-started by Vaughan.

Well, yesterday he was. Many (including myself) no doubt heaved a sigh of exasperation upon the sight of Richardson once again lining up on the left side of the home defence.

We need not have worried. Richardson, often lambasted for his difficulties with concentration, was a hidden hero yesterday. He found himself extremely busy, with Tony Pulis clearly having specifically targeted Stoke's right wing as somewhere joy could be found. 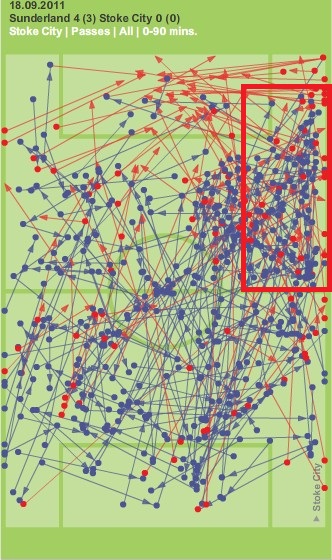 As can be seen, there was a real glut of activity in and around the area Richardson was occupying. However, as illustrated by the fairly high percentage of red dots in that area, much of Stoke's attempted play there broke down, and almost all of their attempts to get the ball into Sunderland's penalty area were unsuccessful.

Richardson was helped by his defensive partners (particularly Wes Brown, who was once again rock solid for the Black Cats) but, given that he was again playing in a position that surely can't be called his natural one, he deserves special praise for an excellent performance yesterday.

It perhaps seems odd that following a performance where Sunderland scored four goals, much of this article (in fact, basically all of it) has focused upon their activities at the other end of the field.

But, to return somewhat to that realm of the cliché, it was the defensive effort that provided the foundations for the Black Cats' victory. Through negating the two biggest individual threats from Stoke, the home side gave themselves an excellent platform from which to build upon.

They were fortunate with perhaps three of their goals, but it has to be said that each one was derived from their own good intentions. For the first, Titus Bramble reacted quickest in a busy penalty area and was duly rewarded with a goalkeeping mishap. The second goal came courtesy of Jonathan Woodgate's head, but was again the product of both a fantastic cross from Seb Larsson and pressure from Bendtner. Furthermore, the third, whilst deflected, was the finishing touch on a flowing passage of play.