Chelsea's visit to Wearside on Saturday ended rather predictably. Amid the stunning news of Asamoah Gyan's seemingly acrimonious departure to the United Arab Emirates for the rest of the season, the Black Cats found themselves on the wrong end of a 1-2 defeat.

Left with little other option following the Gyan debacle, Sunderland gaffer Steve Bruce threw new loanee Nicklas Bendtner straight into the action. However, there was still no starting berth for either Connor Wickham or Ji Dong-Won; the red and whites once again fielded just a sole striker, despite their recent troubles in front of goal.

A five-man midfield saw Stephane Sessegnon line up on the left wing, while Craig Gardner was the most advanced of a central midfield also occupied by Jack Colback and Lee Cattermole. At the back, the injured John O'Shea made way for Kieran Richardson at left-back, while Titus Bramble made his first start of the season alongside Wes Brown.

As for the visitors, new coach Andre Villas-Boas sent a message to £50m man Fernando Torres by leaving him on the bench. Instead, a front three of Juan Mata, Nicolas Anelka and Daniel Sturridge was preferred, with the latter effectively sealing the game with Chelsea's second goal.

The first ninety minutes of Nicklas Bendtner's Sunderland career threw up a number of interesting observations; some good, some bad.

Firstly, on a positive note, Bendtner looked fairly good on the ball. Although as the game went on he allowed himself to be outmuscled more and more by John Terry, in the opening half particularly the Dane coped well. Unfortunately, his most notable moment came when he spurned a free header from a Seb Larsson delivery.

There were some bright sparks though. As can be seen in the below graphic, Bendtner looked to position himself out wide and play in an advancing midfielder. 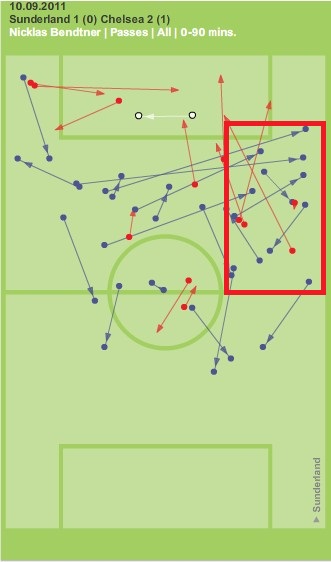 While the striker had some success in getting the ball into the necessary areas, one of Sunderland's key problems was the entirely ineffectual performance of Craig Gardner. The midfielder joined the club on the back of a reputation of getting forward and scoring goals, yet on Saturday the vast majority of his play went either backwards or sideways. 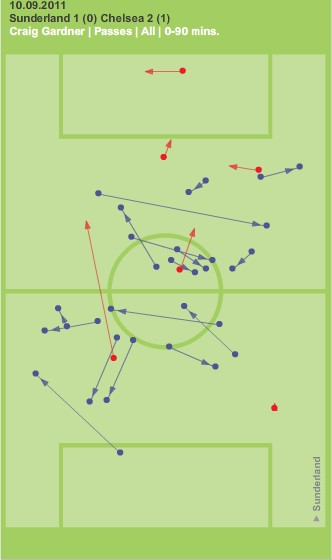 This is perhaps why, after the break, Bruce put Sessegnon into that advanced role, with Gardner sitting deeper and Jack Colback now employed on the left.

The problem with this was that the Chelsea centre halves had by now gotten the measure of Bendtner, and were successful in nullifying any true threat from him. Bruce could have changed this problem by bringing on the powerful Wickham; this would have both taken pressure off the debutant Dane, as well as giving the home side a further attacking threat.

He did eventually introduce the ex-Ipswich youngster, but by this time the game was pretty much lost. However, it is notable that Wickham's arrival on the field coincided with a period of relative pressure from the Black Cats, where previously the visitors had looked completely unruffled.

Another more worrying aspect regarding the debut of Bendtner was the unwavering appetite Sunderland displayed for launching high balls up to him. Despite having learned his trade at Arsenal, and thus no stranger to having the ball at his feet, the loanee found himself continuously competing for long balls aimed at his head and upper body.

As stated, he acquitted himself rather well at times, but such tactics were lacking in any real kind of aesthetic pleasure for the home support.

Furthermore, it was abundantly (and sadly) clear that this was an intended tactic for the red and whites. Whereas the visitors often attempted to play the ball out from the back, it was an extremely rare sight when Simon Mignolet played a short pass to one of his back four. Indeed, for the most part, Sunderland's defenders immediately turned away from their goalkeeper as he received the ball; playing the ball out from the ball was seemingly never an option. 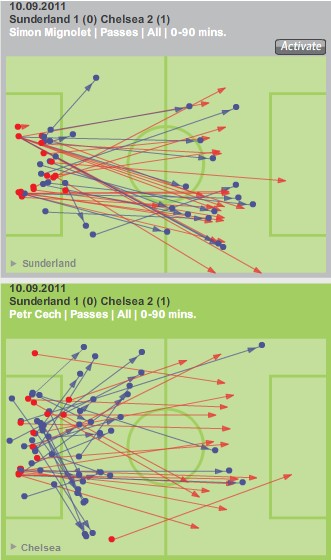 Aside from Jack Colback, Sunderland's midfield was poor on Saturday. True, they were faced with their opponents' array of defending and attacking prowess, but the performances of four of the home side's midfield five will have given Steve Bruce cause for concern.

An enormous question mark now hovers precariously over the head of team captain Lee Cattermole. Known (for better or worse) for his aggression and willingness to tackle, Cattermole is a dying breed in English top level football.

Now, with the speed of the game and the sometimes draconian treatment by referees of certain types of tackle, a lot more of a midfielder's game rests upon his ability to nick the ball from his opponent as opposed to outright tackling him. This can be seen in how Chelsea managed 22 interceptions of Saturday, all over the field, as opposed to Sunderland's 8. 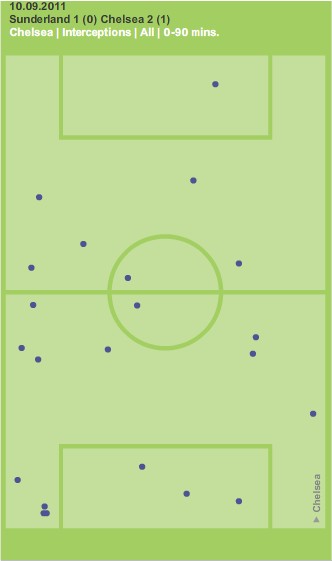 Another problem with Cattermole is one that afflicted Seb Larsson on Saturday: they each slow the game down too much. Both have a tendency to be ponderous on the ball, and, as a result, gift opposing sides plenty of time to set themselves up for any imminent attack.

Against Chelsea, attacking with pace was a necessity. The advanced positioning of full-bakcs Ashley Cole and Bosingwa meant that when the visitors did lose the ball going forward, an opportunity for a quick breakaway presented itself to Sunderland. However, such was the laborious nature of the home side's midfield, they never truly capitalised on this until the game was in its dying embers, and Ji Dong-Won scored a consolation goal.

Craig Gardner, as stated, was poor, while Stephane Sessegnon started brightly but slowly faded out of the game.

Only Jack Colback was worthy of much praise. The academy product was always ready and willing to accept a pass and, when he found himself on the left, made his best effort to get to the byline and get the Chelsea defence turned. On the contrary, Seb Larsson often crossed from far too deep, leaving John Terry and Branislav Ivanovic with simple clearing headers to make. 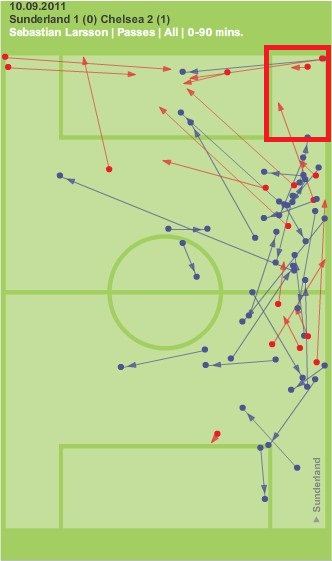 This defeat for Sunderland was not exactly disastrous, but it did little help either. They were neither thrashed nor unfortunate; the Blues deserved their win, whilst the home side battled until the end and were rewarded with a goal.

But a number of potential problems are there for all to see. The reliance on long, high balls forward was chief amongst them; it is neither nice to watch, nor particular effective against centre-backs ike Terry and Ivanovic.

The Black Cats would have been far better off looking to run the channels, or get to the byline and put crosses in from there. As stated though, much of their midfield was poor, and this never looked like happened.

Bruce and his men will now move onto next Sunday, where they welcome an ever-tricky Stoke side.

It will be interesting to see how Sunderland line up for that game. The midfield is crying out for some creativity and, with Lee Cattermole's influence and favour seemingly on the wane (the captain has now been substituted in each of the last two games), it wouldn't be surprising to see David Vaughan given a chance in central midfield.

Meanwhile, Bruce would do well to include the strong Wickham in his opening eleven. The youngster visibly worries sides when he enters the field, be it due to the aura he has built around himself or simply his sheer presence, and the manager should not be afraid to embrace this.