I am not Chris Weatherspoon. He was unable to take his regular feature this week due to being away – presumably sat in some god-forsaken mud field somewhere, ears ringing after enduring the constant abuse of being forced to listen to rubbish bands all weekend, cold, hungry, up to his eyeballs in hippies and, due to consuming copious amounts of alcohol, somehow managing to enjoy every second of it. I am not a music festival person. What I am, however, is Michael Graham and in what I can only assume is a slap on the wrist for disagreeing with Chris' analysis of the Newcastle game, I am Talking Tactics this week looking to cast an analytical eye on the weekend's 0-0 draw at Swansea.

Following his experimental (and I use that term in it's kindest and most diplomatic possible sense) striker-less system at Brighton in midweek, Bruce reverted back to the 4-4-1-1 that he has been favouring in the league. Perhaps surprisingly following his mistake in the derby, Simon Mignolet retained his place in goal, but Kieran Richardson and Ahmed Elmohamady were not to be so lucky. There was a welcome debut for John O'Shea at right back, whilst Craig Gardner came into central midfield. That meant the latest player to win a shot at the left wing position in the weekly 'Left Side Raffle of Light' down the Training Ground was Jack Colback. (Disclaimer – such a raffle may not exist, but we here at Roker Report haven't seen enough evidence to suggest that this is the case, so that's what we are going with for now.)

In opposition, the hosts sprang no real surprises lining up in a continental 4-2-3-1 system and an unchanged team.

Some evidence of a plan

Although Swansea are new to the Premier League, their reputation for patient passing football built from the back precedes them. With this clearly in mind, Sunderland set themselves up with a rigid midfield four designed to grant Swansea possession at the back. This way, with no midfield players abandoning their defensive positions to press the ball high up the pitch, it became harder for the hosts to create overload situations through midfield. The graphics below, showing the huge amount of possession afforded to the opposition centre backs and Sunderland's effective interception rate higher up the pitch, highlights the tailored tactical planning that went into the game. Swansea's general inability to get behind the Sunderland defence with any regularity can be considered evidence of the success of Bruce's strategy. 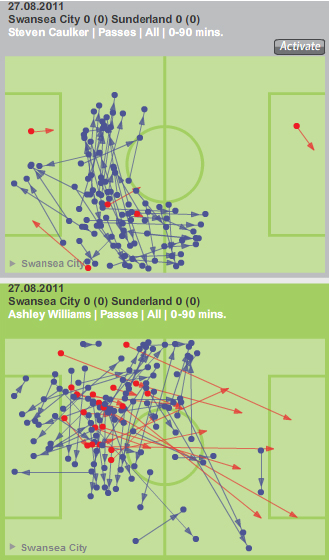 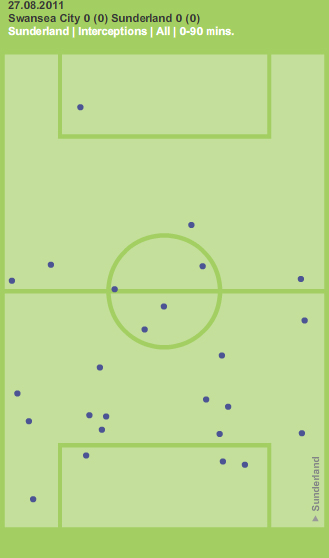 When possession of the ball had been attained, Sunderland attempted to take advantage of the fluid Swansea system and break quickly. Unfortunately, Stephane Sessegnon alone was capable of injecting any speed of thought or vision into the attack, and too often the advantage was surrendered by meandering midfield players holding on to the ball for too long.

A popular criticism of Steve Bruce this season has been a lack of a 'Plan B'. But he just may well have found one in Connor Wickham. With around 70 minutes on the clock, Wickham was introduced and had an impact on the game by enabling his team to turn defence into attack much more quickly. In Wes Brown and Anton Ferdinand, Sunderland now possess two players at centre back with some genuinely discernible comfort and composure on the ball. It doesn't matter how good a distributor of a football you are, however, if you have no one supporting the man in possession and offering someone to distribute the ball to. When we compare Anton Ferdinand's passing in the 20 minutes after Wickham's introduction to the 70 minutes that preceded it, it is clear that the youngster's presence up front and leading of the line created more opportunities to play the ball out of defence in a controlled and progressive manner. 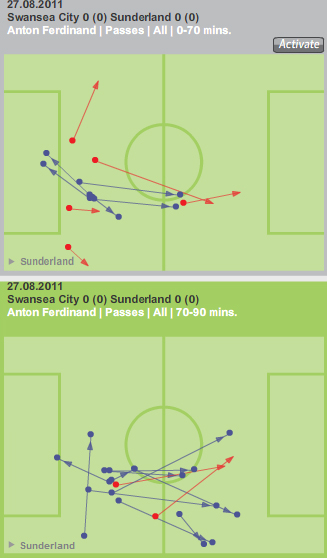 With a constant presence in the opposition half to now play off, Sunderland enjoyed their best spell of attacking play of the game by far culminating in Gyan missing a guilt-edged one-on-one. During this 20 minute spell, Sunderland registered 5 of their 11 shots on goal.

Although pushed out wide in an unfamiliar position for much of the match, Colback was a highly effective part of the disciplined midfield that gave the defence such good protection. He contested and won more tackles than any other player (winning 7 of the 9 he contested without giving away any free kicks), and mae some key interceptions.

Options when on the ball were more limited than he is used to given the wider position in which he was deployed, but he still provided his usual composure and helped retain possession where others would have simply surrendered it. Had Asamoah Gyan been in better sorts he'd have undoubtedly had an assist to his name too.

All things considered this was a very credible point against opposition that should not be underestimated or disrespected. The manager clearly approached the game with a game plan and it worked to some extent by delivering a clean sheet.

Again, the good defensive work was let down by an inability to put the ball in the net, with Asamoah Gyan particularly wasteful. But chances were being created and overall there were plenty of positives to take from the game.