SAFC Lookalikes, Or At Least We Think So Anyway...

Share All sharing options for: SAFC Lookalikes, Or At Least We Think So Anyway...

Just a bit of a fun article, no maliciousness intended towards the parties involved, but I was taking a look round the Sunderland and couldn't help notice a few things... a few players reminding me of other people. Something about Craig Gardners brow, Steve Bruce's nose, the shape of David Vaughan's head, and so on. It got us thinking.

I started to look at it a bit more intently, and hit upon one or two lookalikes for the Sunderland squad. Now they aren't bang on lookalikes. We're all individual snowflakes and all that other crap, but there's plenty of people who look a bit like something or someone else.

I managed to find a few, and we also had a look around other sites to see what people thought of our players, not to mention the missus chipped in with a few suggestions too. Here are some findings from Casa Roker Report. Feel free to disagree or suggest better... 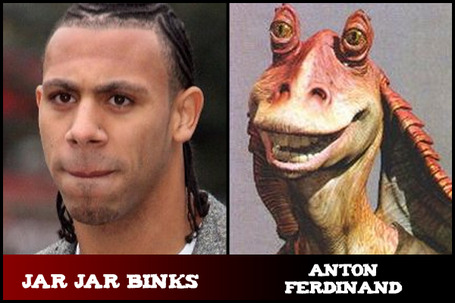 Now to say Anton Ferdinand looks a bit like Star Wars ruiner Jar Jar Binks is hardly a new concept, but its still very much true we think. We feel the nose, head shape and eyes are pretty bob-on. Not to mention when Anton had hair like this it resembled Jar Jar's ears. 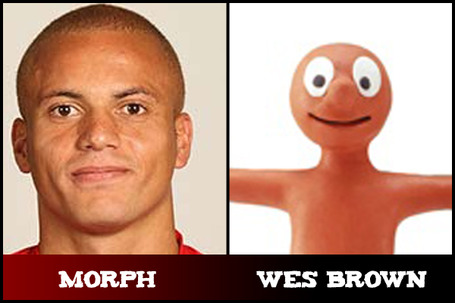 Newly signed Wes Brown, and Tony Hart's bezzie, Morph. This one has been pointed out before, but lets face it, he looks like him. Brown has also been injured and rebuilt just as much as Morph by our calculations. 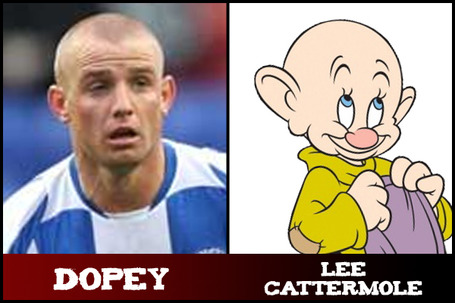 Captain Lee Cattermole, and Dopey from Snow White. Aside from the ears, eyes and head they're both quite small and occasionally silly. A fitting comparison, as well as looking like each other. 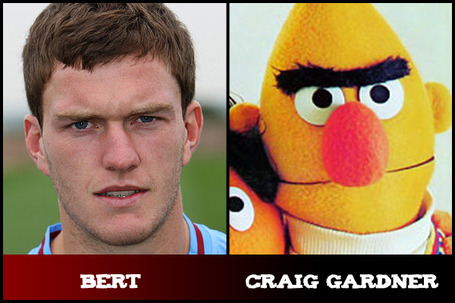 This is one of my favourites, and what started the quest to look for a few more. It was upon his signing for SAFC that I really noticed Craig Gardner's face, and couldn't think who he reminded me of but it was on the tip of my tongue. Then the missus hit upon Bert from Sesame Street. A great comparison. Facially, I think its class. 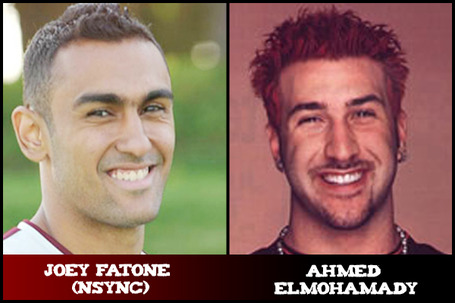 Ahmed Elmohamady, and Joey Fatone from 90's teeny boppers N*SYNC. It's just there isn't it? Across the face. Maybe Asamoah can teach Elmo a few dance moves and we can form a band. 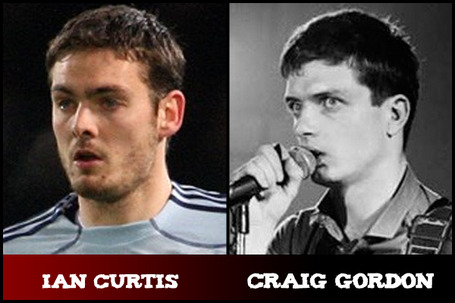 Craig Gordon may look a bit like Gavin from Autoglass, but he has a much more popular lookalike we feel in Joy Division miserablist, Ian Curtis. Speaking of dance moves with Elmo, I'd like to see Craig busting a few of Ian's moves, although Gordon seems quite a bland person, so we'll just have to imagine. 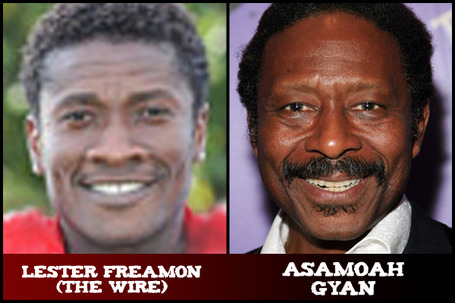 Ok, so this is one where you have to squint a bit, but look up photo's of the pair on Google, and you'll see some striking similarities. It's no coincidence that both are smooth talking badasses too. 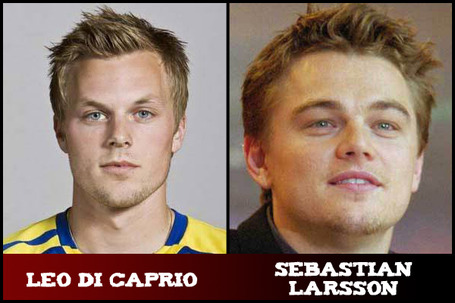 A fairly obvious comparison, and no doubt one that's been made countless times before but that's because it's hard to ignore. Sebastian Larsson really could do some stunt double work for Leonardo Di Caprio if this whole football thing doesn't work out. Plus lets face it, if Vinny Jones can make it in Hollywood why not Seb? 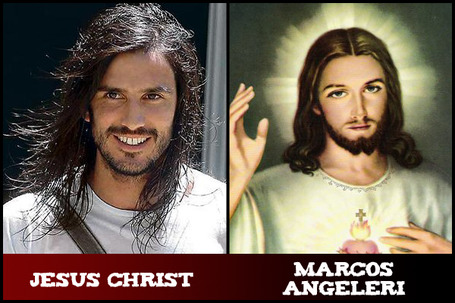 Our lord and saviour, and Jesus Christ are an easy comparison to make. No hang on, Marcos isn't the saviour, he's a very naughty boy. 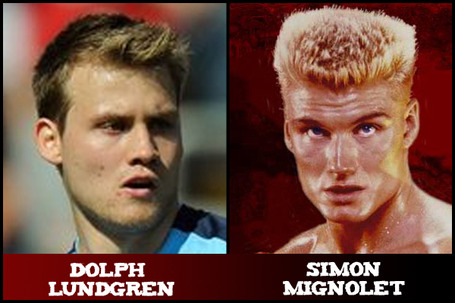 As noted by Michael Graham in his report from the York City pre-season game, this one came from the terraces themselves. Who said terrace humour was dead eh? Simon Mignolet could double up as a double for star of Rocky and erm... other films probably, Dolph Lundgren. Simon & Seb Take Hollywood? I'd watch. 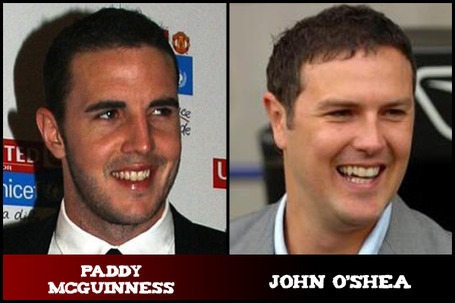 Debate raged over which half of the Phoenix Night comedy duo of Paddy McGuinness & Peter Kay our newboy John O'Shea really looked like, in the end we plumped for this one. Feel free to tell us we're wrong though. Perhaps some sort of weird lovechild of them both? Try not to image that, you won't sleep. 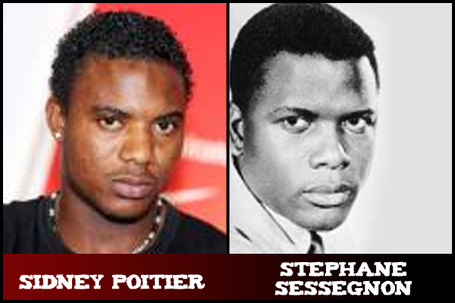 Stephane Sessegnon could pass for a young Sidney Poitier in our eyes, and we think you'll agree. Sess could join Seb Larsson & Simon Mignolet across the pond, or perhaps even a Sunderland-based remake of the Poitier classic - To Sess, With Love? 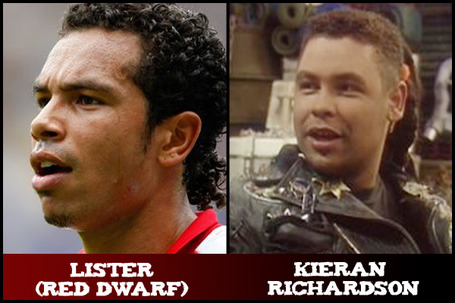 Noted ever since he grew (and thankfully cut off) that ridiculous pony tail, but facially, our left-back-come-midfielder-come-striker-come-winger Kieran Richardson don't half look like Lister from Red Dwarf. Of course, played by Craig Charles, one hopes not to one day see Richardson in the papers on crack. 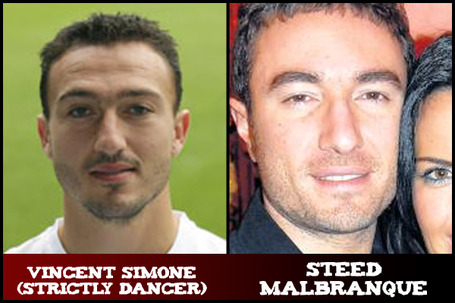 Steed Malbranque and Vincent Simone from Strictly Come Dancing. I've never seen them in the same room, which is all I need to suspect their the same person. I'm not sure where the next series of Strictly will be filmed by the BBC, but recently Steed has been linked with moves to Blackburn Rovers & Fulham, neither a million miles from the BBC's current studios or their new offices to be. 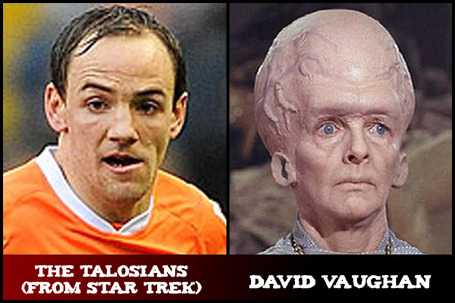 My suggestion for this was Sloth from the Goonies, but this was deemed too harsh. Perhaps so, but the missus pulled out The Talosians from Star Trek. I had no idea who they are, but they do have rather bulbous heads like Mr Vaughan. On an even more worrying note, I may have to follow up her interest in Star Trek, this is new information. 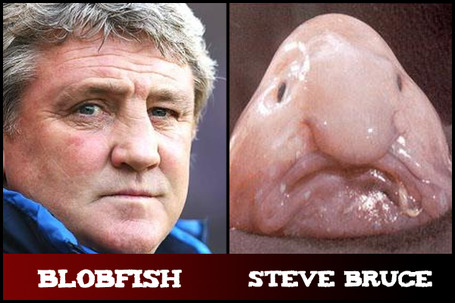 While the main lookalikes for our leader include Mrs Doubtfire, a crinkled pillow and a potato, I find the Blobfish to rise above them all. The nose, the eyes, the lack of a smile. It's just perfect! By the way, I'm told this is an actual fish too!

As for the rest of the squad, I found them to be pretty non-descript. Apart from Titus Bramble. He really looks like someone, but I just can't think of it. If you've got a good suggestion for one of our players, or think there's someone better out there for those we've mentioned come on over and comment and let us know. We're always welcoming of your thoughts!

I must also reiterate, this is just for fun. No offence intended towards man, creature or cartoon character involved.