Now then you may have heard us waffling on about Northern Leagues United form time to time over the last few months, and it's upon us tomorrow! For the uninitiated, let me fill you in on the details.

Northern Leagues United is a charity event tomorrow at Birtley Sports Ground, kicking off around 11.30am, and you get to watch 3 games for 3 quid. Can't argue with them prices in todays world of modern football, and it's all for charity, if you needed more convincing.

We're doing this in aid of Onagawa, a small town in Japan wiped out by the recent tsunami. Like, pretty much completely wiped out. In the restoration efforts, those in the town have rallied around the local football team - Cobaltore Onagawa - you can read more about the inspiring story over on this very fine little website - http://northernleagueday.wordpress.com/ - so go and do it.

Full details of the day coming right up after the jump...

Ok, so get yourself there around 11.30am. The Birtley Sports Ground is one of the oldest grounds in the world, so you get to see a little bit of football history while you take in three fine matches.

Getting things underway will be Birtley will be a friendly between Birtley's U17 and U18 sides. Some of the finest young footballers in the area. Chelsea's Carl Magnay & Hartlepool's Michael Mackay are both products of the Birtley youth team in the past.

Following that will be quite possibly the main event. Certainly when it comes to Roker Report's involvement anyway, and no doubt the moment when the lol-fest ensues.

At 1pm, a team of Northern League Fans will take on a team of Football Writers. Roker Report's sexiest member, founder and leader Simon Walsh will be donning some boots and lining up for the Football Writers team alongside such luminaries as Nick Loughlin, Richard Mason & Paul Fraser from the Northern Echo. Iain Macintosh from The New Paper & Sports Illustrated. Simon Bird from The Mirror, Mark Douglas from The Journal & Simon Pryde off of the radio. Not to mention a host of your favourite bloggers such as Andy Hudson from Gannin Away, Andrew Gibney from Gib Football Show, plus Jeff Livingstone & David Hartrick - The brains behind In Bed With Maradona... and then of course bottom of the pile, yours truly representing Roker Report and SAFC on the day.

You'll get to witness why we merely talk about football as opposed to play it to any level, as we no doubt get skinned by a fans team which includes Whitley Bay's Wembley goalscorer and all-round Northern League legend, Paul Chow.

We'll be doing battle over 90 minutes, and possibly penalties for the first ever Onagawa Cup.

Following that will be a friendly between two much more proper teams - Birtley's first team will take on Ryton & Crawcrook Albion.

As for yourself, there'll be a bar open all day, and no doubt you'll see me propping that up for an extended period after the games, and there'll also be a raffle with some truly grade A prizes. The one I'm gunning for is tickets to SAFC at Blackburn Rovers, with full hospitality.

Sounds pretty damn good eh? Remember all this, ALL THIS will set you back a mere £3. What else you got planned? Not even the birth of your first child will be as memorable or as entertaining as this game. Get yourself along, and support the North East football scene, as they help out the North East of Japan.

For further reading on who's playing in the Fans v Writers game head HERE.

And for more details on the day in general, and the story behind Onagawa, head HERE.

It's a bit like Live Aid, but with football. No Phil Collins, and no Bob Geldof being a complete penis. The sentiment stands though - Give us your f***ing money! - Oh, and enjoy the game! 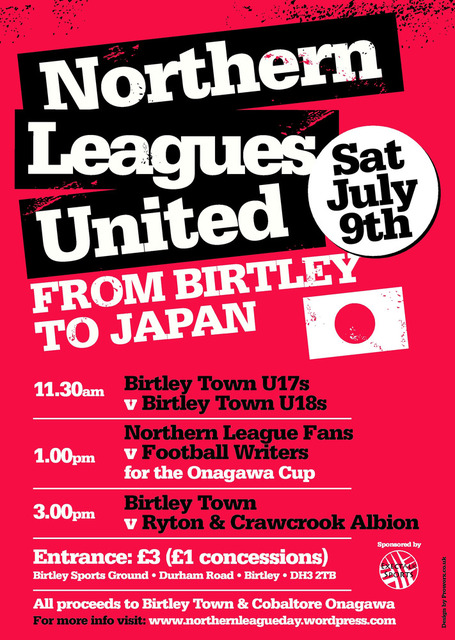