Whilst Asamoah Gyan is wrapped up in cotton wool and kept under "lock and key" in a house made of marshmallow back on Wearside tomorrow the rest of the lads continue their pre-season German adventure with a step up in competition from the weekend as they take on Bundesliga outfit Hannover 96 at the Weserbergland-Stadion.

As always we here at the Roker Report are committed to providing the travelling red and white army with the lowdown on what to expect.

Mal Robinson, the Editor-in-Chief of Seventy3 is going to be reporting on the game for us too, so stay tuned for that. You can also buy the third issue of rather marvellous Seventy3 right now on their website for just £2.50 (inc P&P) so get on it... http://www.seventy3magazine.co.uk/

You know the drill by now, so join me after the jump for more German goodness!

Hannover 96 were originally formed in 1896 as a rugby and athletics club, not adopting the beautiful game as their primary sport until 1899. The club are going into the new season with confidence high following an impressive fourth placed finish in the Bundesliga last term.

The club have been in the press most recently following the tragic suicide of goalkeeper Robert Enke in November of 2009. Enke had been battling with depression since the death of his daughter in 2006. Robert had been widely tipped to become the number one for the national side before his death.

The current squad has a couple of familiar names including former Chelsea, Crystal Palace and Birmingham City frontman Mikael Forrsell, while you'll also fine one time Fulham player (I know nothing about him) Leon Andreasen. I can also tell you goalkeeper Robert-Ron Zieler was once on theh books of Manchester United, having signed him a few times on Football Manager as a back-up.

Hannover 96 usually play their home fixtures at the AWD-Arena. Currently a 49,000 all seater stadium, the ground has seen a number of redevelopments over the years, most notably for its participation in the 2006 World Cup, for which it was temporarily renamed the FIFA World Cup Stadium Hannover - catchy eh?

However the travelling fans are not to be treated to the luxury of the AWD-Arena for this pre-season clash, instead being the guests of the more humble surroundings at Hameln's Weserbergland-Stadion (below). What is in essence an athletics track. Think Gypsys Green on steroids. This ground has one main stand whilst fans can also occupy the grass banks surrounding the running track. If the weather is kind this should however serve to be a cosy environment to take in the action, However if the fans are treated to conditions similar to what we have endured in the UK these past few days it could be grim. 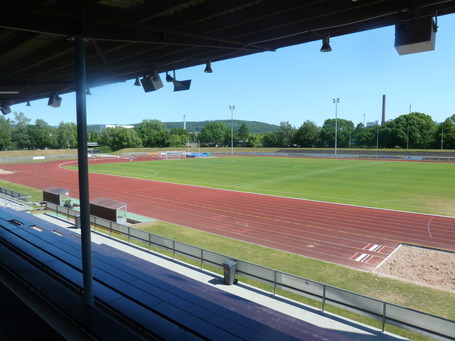 Visiting fans will be treated to a cracking city bursting with culture. With around sixty thousand inhabitants the Weser Renaissance styled city streets are home to the legend of the Pied Piper, who unfortunately was no distant relative of one time SAFC injury machine Matty Piper.

If you can spare a couple of hours before KO the city has a trail of white rats painted onto the paths of the historic city which will show you all Hameln has to offer.

The city also has somewhat of an infatuation with sports boasting a number of swimming pools, both indoor and outdoor, so we hope you've packed your speedos and your inflatable rubber ring.

Hameln's centre is fairly compact which has the benefit of never being more than a short walk between the bars and pubs. Towards the North of the City there are three bars spread across Baustrabe including, Hameln's Suppenbar, K3 and Das Wirtshaus all worth a look.

Also towards the South of the City on Backerstrabe can be found the Mosquito Bar, which is the place to be for a bite to eat and maybe even a cocktail or five if you are that way inclined.

However the place to be for a few ales and maybe some live music is Papa Hemingways, also know as Aladdin's Bar which can be found nearby to the Mosquito Bar. If you're there tonight (Tuesday) be sure to check out the reggae stylings of Uwe Banton. No relation to Uwe Rosler or Pato Banton by the looks of things, more like Jesus crossed with Osama Bin Laden. I'd go.

Given the relatively small area the city covers you should never be more than five minutes away from a fine watering hole, just don't forget that there is a match on!

Hmm, beginning to think that it may have been a bad idea to include this section into my previews! While the opening fixture with York threw up plenty of players to choose from that had played for both sides I didn't really consider the German opposition! Any excuse to mention the legend that is Marco I guess!

So as a tentative link between the two sides I present to you Emanuel Pogatetz. The committed Austrian defender represented Middlesborough for five years before his move to the German side and is probably remembered favourably by Sunderland fans for his own goal in the 90th minute to give the home side the points in the 07/08 season. This victory sealed Sunderland's Premier League status for another year. Cheers Emanuel!

Don't forget to report back on Thursday for our round up of all the action from the game and in the mean time keep firing over questions for the podcast, no matter how weird and wonderful, to us via Twitter - @RokerReport