A gloriously sunny day in the North East as fans for the Northern League came together with people like myself who write about football. The build up had gone on for weeks, and on Saturday we put our pens where our mouths were, so to speak, and back ourselves up.

Ladies and gentlemen, here is the story of Northern Leagues United, through the eyes of Simon Walsh of Roker Report.

The game started effectively with a meeting of minds in The Alum House, South Shields on Friday night for a pre-match meeting. I say meeting, more a few beers with occasional tactical discussion between myself, organisers Andy Hudson & Michael Hudson, a few lads from FC United Of Manchester Radio (who added some fantastic commentary to the game itself) as well as Scott Johnston from TheFootyBlog.net. Up for discussion was formations, tactics, monkeying around in Leipzig, and... well...  how Andy chooses to watch the Channel 4 News is his own business and we must respect his privacy.

Then of course, the big day. We arrived around 11.30-ish, just in time to get warmed up with few coffee's and see Birtley's U17 team take on they U18 counterparts. Can't remember the score to be honest. It was 2-1 to the team in Navy blue last time I looked though. There was too much focus on our own game.

Focus slipped as we slunked (is that a word?) off to the changing rooms to prepare ourselves, and recieve some inspiring last minute words from our coach for the day, Gavin Fell (assistant mastermind behind Whitley Bay's FA Vase success) and yet more inspiration from Jeff Livingstone, editor of always magnificent In Bed With Maradona.

I'm sure those were highly inspiring anyway, however myself, Ryan Hubbard, Iain Macintosh, Pras Murukesvan, Ian Rand and several others found ourselves in a different changing room, alone, wondering "Where's everyone else, and where's the kits?"... a look round a few other rooms and we realised the error of our ways.

A quick change as the rest went to warm-up on the field whilst we changed into some garish black and white ensemble. I chose to ignore our location in the North East and discount the possibility that it was reminiscent of those great unwashed up the road from us, and more someone like Juventus. Although my performance on the day wouldn't have looked out of place somewhere more humble, more like Notts County... Under 12's... Girls... Blind Girls.

The teams were announced, and I found I was playing exactly where I was told in the Alum the night before, right back. Starting right back. Not quite the attacking right back that was mentioned in the programme, but a fullback none the less. I'd liken it to Phil Bardsley's brain in Gareth Hall's body. 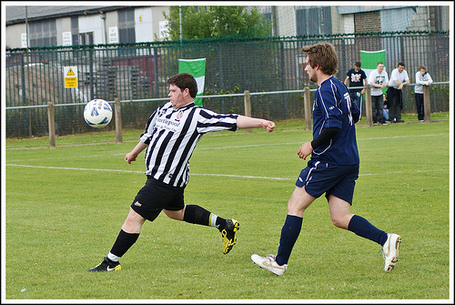 A formidable backline was formed with myself, Stuart Fuller of The Ball Is Round, Nick Loughlin from the Northern Echo and Mark Douglas of The Journal. If Bruce's still looking for a centre half, I tell you what he could do alot worse than Mr Loughlin, who was an absolute rock at the back, not to mention he seemed to be able to play around 85 minutes without passing out like the rest of us.

After about 20 minutes of tackles, interceptions, light jogging and misplaced passes, I was withdrawn from the action as Gavin took advantage of our extensive squad, and rolling subs situation. I must point out for my own confidence, it was 0-0 at that point, and shortly after things fell apart sort of... 2-1 to the fans within a matter of minutes.

At this point on the sidelines I could either seize up, like I am now writing this, or continue to play. I was ready and waiting whenever the gaffer called, and was promptly popped back into the game, this time in centre midfield with Simon Pryde off of the radio. 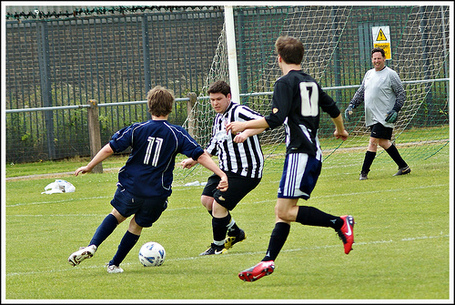 This was more my scene, and it showed with what I'm describing as a deft chip over the top to Ryan Hubbard who finished with style to make it 2-2. Some may have called it a hopeful punt that the centre half misjudged. I'm saying it was perfectly weighted. Who you gonna believe?

I believe thats how things ended at half time. Many Kopparberg's and various other alcholic drinks were flowing post-match. A rousing half time speech from Gavin, mainly about the fact that we should try and come up with better celebrations when we scored, I headed back onto the pitch full of hope, and with visions of channelling Asamoah Gyan when I scored.

Of course to score, I'd have to have a shot, and in the game I only managed one. Weak as it was, it was on target from all of 25 yards. So stick that up as 100% shot accuracy on your chalkboard.

Having played another 10 minutes or so, a breather was required.

The game was a belter to watch though, even if we were getting battered by this point. I must say however, we played very very well in the circumstances. Those circumstances I refer to were basically being up against Paul Robinson, once of Newcastle and Northern League legend and Wembley goalscorer Paul Chow, who between them grabbed 4 of the fans teams goals.Curiously enough, we managed to work a deal out at half time where they started playing for us in the second half, however Chow & Robbo's skills didn't seem to follow as sitter after sitter was missed.

Luckily for us, we had our own secret weapon in man of the match, and scorer of our third goal, Echo writer Paul Fraser playing very handily up front as part of a front 2, then 3, then 4, and in the end it was more of a 1-1-8 formation, myself being one of the eight, and truly shattered.

One man who didn't lack energy however was our second half goalkeeper Tomasz Mortimer who ran the length of the pitch to come up for a corner, connect perfectly, and miss by inches. Seriously, if it had gone in, we'd have been saying "Mart who?"...

The match report would not be complete without a mention to the woman in the stands who clearly was taking full advantage of the bar being open. The Bellis Brothers (tall and thin)... "Peter Crouch 1 & 2!"... Richard Mason would have scored if he spent less time on his hair, and everyone else greeted with a general "you're s*** you are like"...

Time dwindled away and the final score came out 6-3 to the fans, who held aloft the first ever Onagawa Cup.

I'm told by Mrs Roker Report who was in attendance I scored 4/10. However she is a tough judge. Starting at 0/10 and adding a point on for doing something good and -1 point for doing something bad. One prays this scoring system is only employed on the football pitch, and nowhere else... 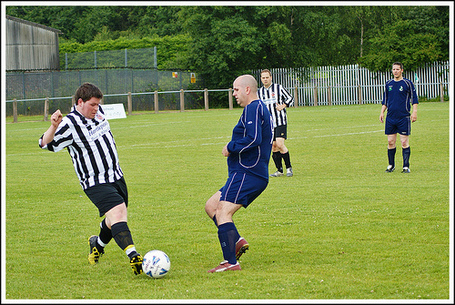 Nearly 300 people were in attendance, breaking the record for both Birtley and the ground itself. They must have known I was going to be there. The final tally isn't in yet, but I'm told thousands upon thousands were made in ticket sales, t-shirt sales, and of course raffle ticket sales. A hugely successful raffle for Roker Report, as we walked away with signed shirts from Spennymoor United, FC United Of Manchester and Whitley Bay's Vase Winning Team. That said, we did buy £20 worth of tickets.

Very sorely and very wearily we hit the town for a few more drinks post game. Some top craic between all the lads in attendance, and a thoroughly brilliant day.

We're told that this will become an annual event. If invited, and I hope I am, I promise I'll be a little fitter. Or at least think about being a bit fitter anyway.

For more reading on the day head HERE

To look at some pictures of the day head HERE (I'm No.16 in the stripes)

Quality day all round, a massive thanks and well done to Andy, Micheal, Birtley and everyone else involved in the organising, those who donated raffle prizes and those who donated their time and effort for a great cause. Looking forward to the next one already.

Also looking forward to August the 20th, for a potential clash between NUFC blog Leazes Terrace and ourselves...