Ergh. Back to normality. After last week's brief foray into the land of victory, Sunderland returned to earth with a resounding thud on Saturday following a 0-3 home defeat to Fulham. A bright start from the Black Cats had the home fans thinking of a possible second straight win but following loanee Gael Kakuta tucking away the visitors' opener against the run of play the men in red and white never looked like taking anything from this game.

Shorn of all his senior strikers through injury, Steve Bruce still surprised many by setting his side up in a 4-4-2 formation. Steed Malbranque and Stephane Sessegnon were the lucky, or perhaps unlucky, two who led the line, backed up by Cattermole, Colback, Muntari and Henderson in midfield. In truth, neither Malbranque and Sessegnon played as typical strikers, with both, and particularly Malbranque, roaming back towards the midfield in the hope of gaining possession. The back five that started a week ago against Wigan continued once more, Phil Bardsley having recovered from the concussion he sustained then.

For the visitors, Mark Hughes opted for two big men up front in the forms of Eidur Gudjohnsen and Bobby Zamora. Kakuta and fellow goalscorer Simon Davies occupied the two wide midfield positions, anchored by the sturdy nous of Steven Sidwell and Danny Murphy in the middle. At the back, Brene Hangeland's absence meant a central defensive partnership of Philippe Senderos and Aaron Hughes. They were flanked by Carlos Salcido and Chris Baird, with this 4-4-2 lining up in front of goalkeeper Mark Schwarzer.

What really told in this game was Fulham's experience once seizing the lead just after the half hour mark. Prior to that the visitors had been under a relative barrage of attacks from Sunderland, but weathered the storm admirably. When Kakuta poked home the opener, Hughes' side instantly took control of the game, with the likes of Murphy, Gudjohnsen and Zamora guiding them to a comfortable victory. 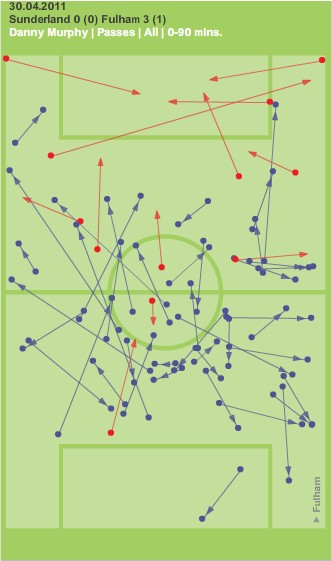 Murphy's passing grid shows his effectiveness. Whilst few of his completions found their way into the final third, his solid passing in deeper positions helped the visitors gets a stranglehold on the game following the first goal.

Ahead of Murphy, the two seasoned strikers performed an admirable job of retaining possession so that those in midfield (or in some cases, the Fulham full backs) could join in with the play and exert their influence over the home side. Gudjohnsen completed 26 of his 40 passes, many of them short lay-offs having held the ball up.

Zamora was even better, and caused Sunderland defender Michael Turner torrid problems all afternoon. Providing the assist for the crucial first goal, the England striker, through a mix of good control and cleverly using his frame to outmuscle the opposition, was probably Fulham's top performer on Saturday afternoon.

Clearly, Sunderland were at a disadvantage from the off, with no first-team strikers available to start. This became evident in that opening period of pressure. First Steed Malbranque and then Lee Cattermole found themselves with glorious opportunities, only for both to spurn them woefully.

On the flipside, the visitors had just three shots on target all game, converting all of them. Steve Bruce, knowing his side were unlikely to be flush with goals, needed his defence to remain strong and cut out the recent individual errors that had marred recent defeats.

Typically, he was let down. As stated, Michael Turner in particular had a poor game. Unsuccessful with almost half of his passes (misplacing 17 from 41), the ex-Hull man has looked out of form recently, suggesting he has yet to return to full fitness following a lengthy lay-off. 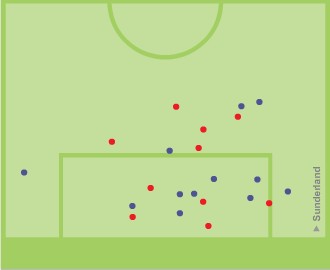 But the entire Sunderland back line did little to inspire confidence. As shown above, too many of their clearances fell straight to the opposition (10 from 22). In goal, Simon Mignolet looked shakey; at left back, Phil Bardsley was poor by his standards and again offered little attacking threat; whilst the third and final goal was scarcely recognisable as Premier League defending.

Fulham thoroughly deserved to win this game. Given the circumstances, one might wonder if 0-3 was harsh on the home side, but their shoddy defending allowed this to happen. Knowing that goals would be a rarity at the other end, the Wearsiders needed a solid performance from the backline. Unfortunately for them, it was not forthcoming.

The visitors' experience shone through against a young Sunderland side, and after the opener there was only one way this game was ever going to go.

Roker Report have been nominated for 'Best Club Podcast' in the EPL Talk Awards, please head here and vote for us! - http://www.epltalk.com/2011-best-epl-club-podcast/