And so, the curtain falls. Since its inception in February, 'Talking Tactics' has had just two victories to preside over and, unfortunately, it ends on a sour note. With the end of season round-up demolishing any chance of analysing a potential victory over the relegated West Ham, I'm left with summarising a dismal 1-3 defeat at home to Mick McCarthy's Wolves.

Blighted by yet more injury woes, Sunderland's squad consisted of no less than nine academy products. Of that nine, Jack Colback and Jordan Henderson took up places in the starting XI, accompanied in midfield by Bolo Zenden, Steed Malbranque and, in a rare start for the Paraguayan, Cristian Riveros. The home side lined up in their now familiar 4-5-1 formation. Anton Ferdinand succumbing to injury once again meant Nedum Onuoha filled in at centre-back alongside John Mensah, with Ahmed Elmohamady reverting to right-back once more.

Wolves, guided by ex-Sunderland boss McCarthy, arrived on Wearside knowing three points would go a long way towards ensuring their Premier League survival. The Yorkshireman also set his side up in a 4-5-1, with Steven Fletcher leading the line. Former Sunderland man Jody Craddock returned to the Stadium of Light at the heart of his side's defence, with Karl Henry taking up a holding role in front of him to make up the spine of the men visiting from the Midlands.

Sunderland's defeat was not down to an all-round poor performance. More accurately, the Black Cats lost because a series of defensive errors were mercilessly punished by the visitors.

All three goals conceded on Saturday were avoidable. For the first, Jody Craddock was inexplicably left entirely unmarked at the back post. Simon Mignolet's failure to claim Matt Jarvis' cross allowed Steven Fletcher to put Wolves back in front just after half-time, whilst George Elokobi was given a free header from eight yards to seal the game.

Nedum Onuoha suggested the game was lost because Wolves simply "wanted it more", but the statistics don't quite reflect this. Sunderland were actually successful in the tackle more times than the visitors. Instead, it would seem profligacy on the home side's behalf and proficiency from McCarthy's side were the dividing factors. 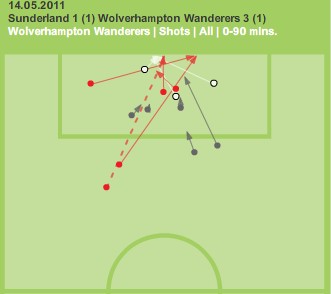 As shown by the chalkboard, aside from their goals, Wolves didn't have a shot on target. However, all their efforts that were on target ended up in the back of the net, reflecting their ruthlessness in front of goal.

A key problem for Sunderland on Saturday was, when things went wrong, Steve Bruce had limited options as to how he could turn the game around.

With a bench consisting entirely of academy products, the home side were without the option of bringing on someone who could put their mark on the game and change it in their favour. That is not to denigrate against the youngsters in the squad at the weekend, but the relative lack of experience that Sunderland could call upon meant they were never likely to get back into the game.

Where the home side really needed some help was in pushing on from midfield. Stephane Sessegnon played well but was all too often left isolated up front, with Sunderland failing to push forward frequently enough to make their superior possession tell. 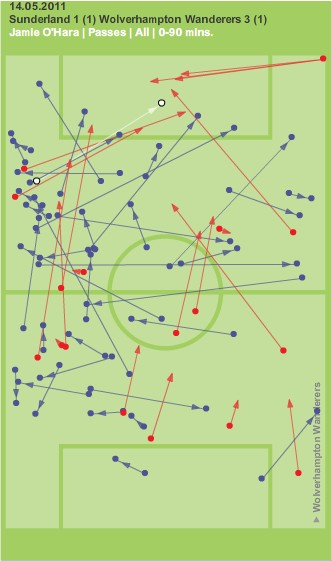 On the contrary, in Jamie O'Hara the visitors on Saturday had a man capable of driving his team from midfield. The above chalkboard shows how active O'Hara was, as well as how much of his passing activity came in advanced areas of the field.

The man on loan from Tottenham eventually provided the assist for the all-important third goal, a reward which matched his excellent performance. Rarely wasting possession, completing the vast majority of his 57 attempted passes, O'Hara kept things simple when he needed to and looked to provide his team with a further attacking outlet where possible.

His good performance was complemented by the solid form of Karl Henry, there to pick up any loose balls and break down Sunderland attacks. Furthermore, Steven Fletcher led the line well up front. Always industrious, and a constant thorn in the side of John Mensah, the former Burnley man was rewarded with a well-taken headed goal.

Wolves deserved this win. They came to the Stadium of Light knowing a win was vital in their push for survival, and duly delivered. By keeping up the pressure in the second half until the game was secure, Mick McCarthy's team wore down an inexperienced home side.

Despite conceding three at home for the second time in succession, Sunderland were, on the whole, not that bad. Individual defensive mistakes cost them, but, considering they were without ten first-teamers, the Black Cats didn't do too badly – particularly in the first half, when they should have opened the scoring on a few occasions.

Jack Colback was tidy once again, whilst Stephane Sessegnon is looking more and more impressive with each passing game. Sunderland now travel to the relegated West Ham for this season's final game; here's hoping they bring the curtain down in style.