The rollercoaster ride that is Sunderland's season took another mind-boggling twist in Lancashire on Saturday. Travelling to Bolton devoid of first-team strikers, Steve Bruce was left little alternative than to name no fewer than six (seven if we count Ahmed Elmohamady) midfielders in his starting line up. With goals from midfield having been thin on the ground all season, hopes weren't high for the 4,000 red and whites who made the trip to the Reebok Stadium. Imagine their surprise, and joy, when they made the return journey north on the back of the most unlikely of 2-1 victories.

Steve Bruce's decision to leave young strikers Ryan Noble and Craig Lynch on the bench meant Stephane Sessegnon was again tasked with the duty of leading the line up front. Rumours before kick off suggesting Ahmed Elmohamady may join him up front, but Bruce instead opten for a 4-5-1; Elmohamady took up his more familiar position on the right side of midfield, Steed Malbranque operated on the left, with Jordan Henderson, Jack Colback and a deep-lying Bolo Zenden fitting in the middle. At the back, Simon Mignolet continued in goal, with Phil Bardsley, Nedum Onuoha and a defensive partnership of Anton Ferdinand and John Mensah in front of him.

Owen Coyle lined his Bolton side up in an interesting 4-4-2 diamond formation. Club legend Jussi Jaaskelainen took up his place between the sticks behind a defensive line of Gretar Steinsson, Paul Robinson, Gary Cahill and Zat Knight. Just in front of the back line sat ex-Arsenal starlet Fabrice Muamba, with Matty Taylor (regular scorer against the Black Cats) and Lee Chung-yung out wide. Johan Elmander was positioned in an attacking midfield role, behind the lively strikeforce of Kevin Davies and loanee Daniel Sturridge.

Following last week's calamitous defensive showing at home to Fulham, Steve Bruce would have expected a reaction from his side. The fact he got one was the main reason why his side secured their fourth away league victory of the season.

Though they started brightly, the visitors came under pressure towards the end of the first half, with Bolo Zenden's opener coming against the run of play. This pressure continued into the second half, and only some excellent defending stopped the hosts equalising earlier than Ivan Klasnic's 87th minute header. 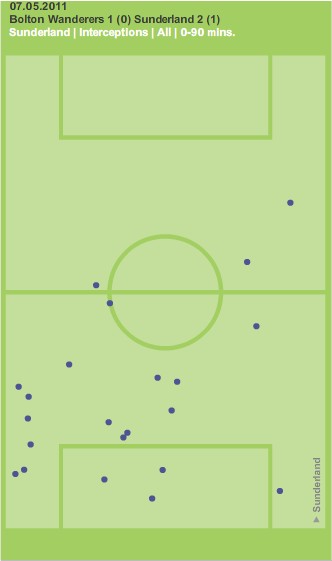 In all, Sunderland completed a lofty 22 interceptions at the weekend. With Johan Elmander playing in an advanced role, he effectively became a third striker when Bolton enjoyed sustained spells of pressure. As a result, it was imperative that the visiting back line held firm; they managed this with aplomb.

Anton Ferdinand, in particular, must be singled out for his excellent performance. Oft-criticised for his tendency to launch the ball aimlessly, Ferdinand refrained from doing this on Saturday except when there were seemingly no other options on, and was successful in playing the ball out from the back in much the same way his brother has perfected at Manchester United. In addition, the ex-West Ham man chimed in with two vital interceptions, as well as winning 75% of the tackles he contested. Some blame has been lain at his feet for Bolton's goal, however this observer believes Phil Bardsley (who was otherwise faultless) was the guilty party, failing to react to the situation in time and allowing Klasnic the chance to head home. 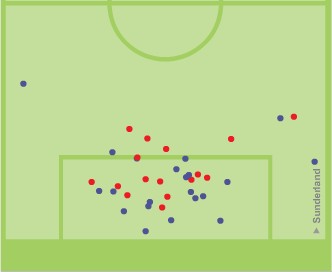 Looking at the Black Cats' clearances also reiterates the stern manner of their defence at the Reebok. 37 clearances in all were made, and whilst many didn't find a fellow red and white shirt, what is important is the sheer concentration of them. The chalkboard above illustrates perfectly how much pressure was exerted by Coyle's Bolton; that Sunderland committed only one major lapse in concentration shows that they deserved the three points on Saturday.

Since being thrust into the first team as a result of Sunderland's torrid luck with injuries, youngster Jack Colback has coped admirably. Saturday was perhaps his best performance yet. Anchored expertly by the experienced Bolo Zenden, Colback and Jordan Henderson were able to seize the initiative early on and take advantage of Sunderland's one man advantage in midfield. 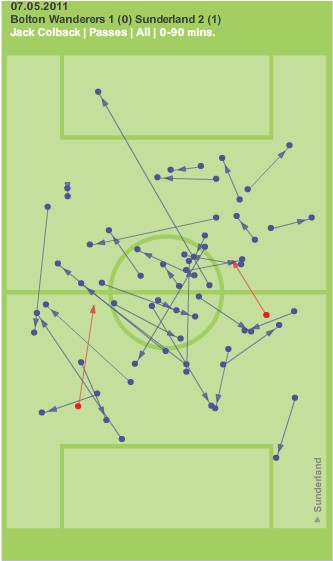 Misplacing just two of 35 passes, Colback's resourcefulness on the ball was an asset throughout. When Sunderland were on top, his probing passes and industrious runs helped them commit men forward to support Stephane Sessegnon (who was excellent, it must be noted). Then, when Bolton pushed the visitors firmly into their own half, Colback's refusal to relinquish possession easily was influential in allowing his side to remain composed and keep good shape in preparation for the attacks that came when the hosts eventually reclaimed the ball.

For years now, Kevin Davies has been Bolton's main goal threat. Imperious in the air and clever with the ball at his feet, the man signed following his impressive showings for Chesterfield in their 1997 run to the FA Cup semi-finals spearheads most of The Trotters' attacks, and it was thus vital that Sunderland stopped him from having a huge impact on the game. 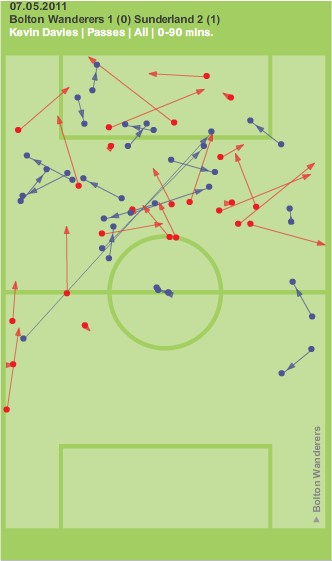 With Ferdinand the particular star performer, Bruce's men did an excellent job on nullifying Davies' threat. As shown, he was unsuccessful with the majority of his passes (24 from 44), even when those passes were simple lay-offs to team-mates positioned no more than a few yards away.

In addition, Sunderland were wary not to allow Davies to draw the sheer number of fouls, and subsequent free-kicks, that he is often able to. They were helped by good refereeing by Kevin Friend (indeed, his inability to spot first handball then a foul by Steed Malbranque led to the opening goal), and also managed to be sensible when Davies received the ball in and around the penalty area. All of the free-kicks he won were in positions not particularly threatening, and the visitors were able to deal with them successfully on each occasion.

Any suggestions that Steve Bruce has lost the dressing room were well and truly dismissed with this result. Sunderland weathered sustained periods of pressure in a way only a side that is truly together could. Furthermore, after conceding a late equaliser, they refused to let their heads dropped, and Sulley Muntari's even later winner was their just reward.

A final mention must be saved for Stephane Sessegnon. Having taken a while to settle into the fast paced life of English football, the Benin international seems to have found his feet as the season comes to a close. Against Bolton he looked truly exciting, testing the opposition with probing and jinking runs, as well as setting up both of his side's goals with exquisite through balls.