Well didn't I just hit the jackpot this week! I got to relive and study Sunderland's pathetic surrender to Manchester City and dissect it for our weekly Talking Tactics feature. Oh what a treat. My first thought when looking back at the tactical shambles of Sunday, was to thank my lucky stars that I didn't have to write an article for every variation of tactics we haplessly turned to on the day, because I'd be here all day. The match was a tale of a manager who appears to have lost all confidence in his ideas, desperately rolling the dice hoping to stumble upon a successful formula.

Sunderland started with what looked to be a very adventurous 4-4-2 formation, with Henderson on the right side of midfield, Sessegnon on the left, and Welbeck partnering Gyan up front. At the back there was a surprise return for Michael Turner coming in for the injured Titus Bramble to partner John Mensah at the heart of the defence. With Nedum Onuoha ineligible to play due to the terms of his loan agreement, Anton Ferdinand and Phil Bardsley continued at full back.

Manchester City went with an adventurous looking line-up, with Balotelli, Tevez, Adam Johnson, and Silva all starting the game, in what was, at times, almost a 4-2-4 formation. Nigel De Jong and Yaya Toure provided the platform in central midfield, although the latter did appear to have licence to get forward.

The hosts made a real statement from the start pressing the ball high up the pitch. Silva and Johnson, the wide players, were pushed right up on our full backs to prevent our midfield from receiving good possession in advanced areas. 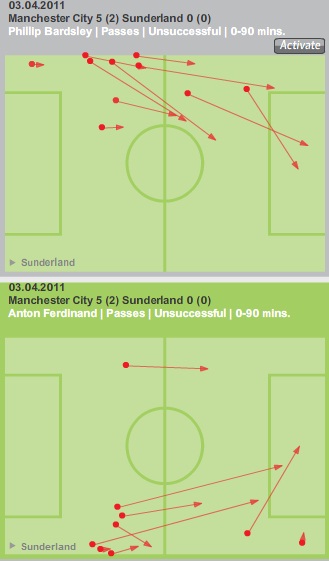 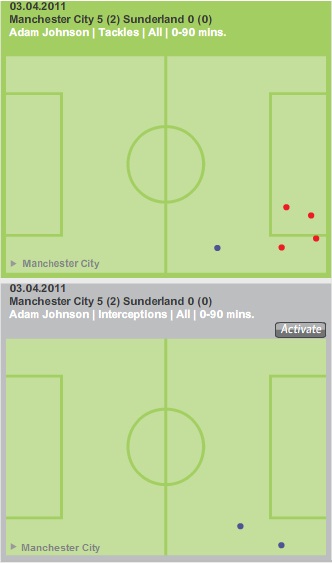 As is apparent above, our full backs struggled on the ball, often being forced to resorting to a long pass whilst under pressure. Adam Johnson was a prime tormentor, showing a willingness to compete for tackles high up the pitch. The result of City's defending from the front was the ability to maintain a much higher defensive line whilst pushing our own back and cramming the game into the Sunderland half of the field, as displayed in the graphic below. 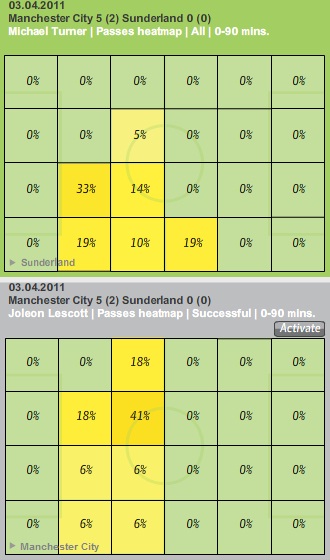 If Sunderland came into the game with a tactical plan in mind then the players either lacked the discipline to stick to it or the management lacked the confidence to believe in it. Twice in the first half alone Sunderland changed tactics, first to 4-5-1 and then to a narrow 4-3-1-2. The lack of shape or direction from Sunderland can best be highlighted by the graphic below which shows how the two players who started the game in wide positions seemingly wandered the pitch freely, throughout all of the tactical changes, without defensive responsibility. 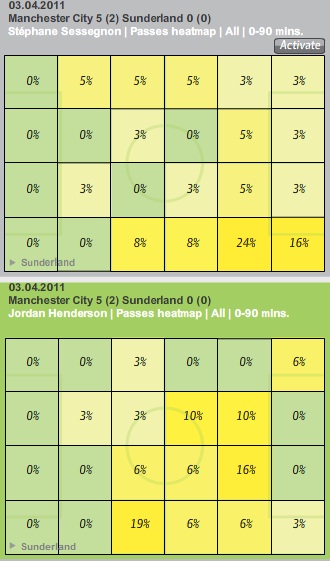 Whilst Ahmed Elmohamady is not everyone's cup of tea, one thing he does provide is right sided balance, and plenty of it. We can see below that his introduction at half time made a big difference to our ability to get into positions from which a ball into the box can be delivered. Unfortunately, it also shows that the quality of his delivery is no where near up to scratch, and significant improvement in that regard must be demanded. That said, he adds a dimension and he provides a semblance of shape to the team. It is not unreasonable to suggest that his team mates can feel very well assured that he can be depended upon to maintain his position. Our left side, on the other hand, which was manned by no less than half a dozen players on the day, shows little sign of either providing balance or producing anything at all. 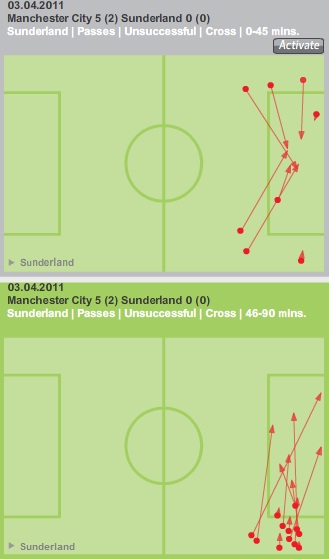 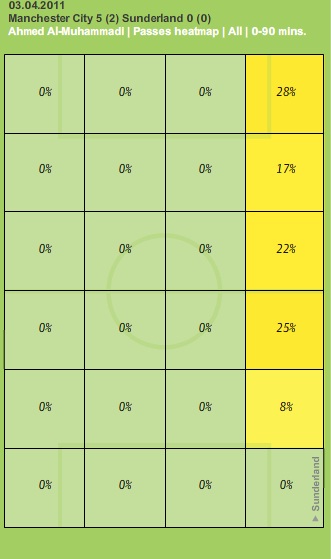 Ultimately, the single most damning conclusion that can be reached from all this is that there appeared to be very little tactical consistency from Sunderland in this game and that is suggestive of either a lack of belief in his own ideas from the manager or, even more worrying, no solid and decisive plan at all. Going away to a team of City's calibre, you would expect a team to be organised with great rigidity and discipline to establish a foothold in the game, first and foremost, and be hard to break down. Instead, what we saw was a team trying to play open, fluid football and Manchester City not being able to believe their luck.

If there was a “plan A”, and there is little to suggest there was, there most certainly wasn't a “plan B” with the manager seemingly plucking new formations out of a hat at will. It is understandable under such circumstances that defensive discipline went out of the window as the players would have likely found it difficult to keep track of what position they were meant to be playing never mind being able identify their defensive responsibilities.

On recent evidence, Sunday especially, Sunderland seem to have got themselves stranded in a no-man's land between losing sight of the basics of defending and a failure to discover the attacking fluidity for which they sacrificed it, and it is a place where no one survives for very long.