Since the inception of our 'Talking Tactics' feature here on the Roker Report, I (and, for two weeks, Michael Graham) have had to endure a two month spell without a single victory to analyse. Finally, at the tenth time of asking, the visit of Wigan Athletic on Saturday afternoon has provided me with a welcome break from the previous weeks' demoralising results. 4-2 it ended, all goals coming in the second half and, for once, it seemed as though the 'Sunderland Injury Curse' actually came in handy this time.

In an action belying a man scratching around for a result, Steve Bruce opted to start with the clearly unfit loanee Danny Welbeck up front, partnered by Asamoah Gyan, with Sunderland lining up in a 4-4-2 formation. When Welbeck pulled up injured within twenty-five minutes, few were surprised, and many questioned the reasoning behind the manager's thinking. As a result, Steed Malbranque came on in midfield, with Stephane Sessegnon now tucking in behind Gyan. An earlier substitute had already been required when Phil Bardsley was stretched off, with Anton Ferdinand taking his place at left-back. Sunderland's third and final injury-induced change came with the scores level at 1-1. Gyan pulled up with a hamstring injury, Muntari arrived in his stead. Sessegnon now found himself up front alone, backed up by an attacking trio of Muntari, Henderson and Malbranque, who themselves were anchored excellently by Lee Cattermole and Jack Colback. It was this final change in formation that, surprisingly, reaped Sunderland's greatest results.

The visitors arrived in a buoyant mood, following on from their 3-1 victory at Blackpool the previous week. Roberto Martinez opted for a familiar 4-5-1, with Hugo Rodallega leading the line. Behind him, dangerman Charles N'Zogbia roamed menacingly, employed on the right but often taking up positions across the entire width of the pitch. The Latics also employed James McCarthy, Ben Watson, Tom Cleverley and Mohamed Diame, scorer of the opener, in midfield. Behind them, a back four of Emmerson Boyce, Gary Caldwell, Antolin Alcaraz and Steve Gohouri weathered Sunderland's pressure well until their eventual capitulation after the hour. In goal, Ali Al Habsi could do little to prevent his side shipping four goals in a little over twenty minutes.

Key to Sunderland's victory were team captain Lee Cattermole and youngster Jack Colback. Even in the first half, when Sunderland's pressure failed to provide anything in the form of efforts on goal, these two provided a key platform from which the home side could push on. Both were extremely useful in possession, rarely wasting a pass and always looking forward to play the ball on the ground. Indeed, Cattermole was almost caught out for his (entirely commendable) efforts to play the ball out from the back, as Simon Mignolet was called into action following the captain's loss of possession. 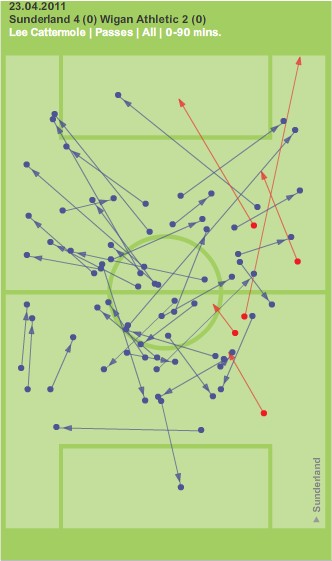 Cattermole misplaced just 5 of his 43 passes. When Colback's figures are added into the mix, it is shown that the midfield pairing were successful with 61 out of their 71 attempted completions. This is a hugely impressive statistic, and is a marked change from recent weeks (not including the recent defeat at Birmingham), where the Sunderland midfield had given away possession far too willingly.

In addition, the pair had six interceptions between them, as well as having a combined tackling success rate of over 50%. This greatly negated the effectiveness of Wigan's own midfield, as they found it difficult to get past the home side's first line of defence. 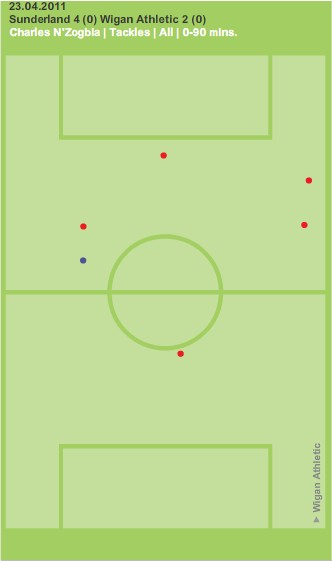 As is common knowledge, the main threat in the visiting side was expected to be Frenchman Charles N'Zogbia. Steve Bruce knows this full well, with many expecting him to ramp up efforts to sign the midfielder again this summer, and thus containing him was a main part of the Sunderland gameplan.

N'Zogbia was unsuccessful in five out of six tackles, something which came as a direct result of Cattermole and Colback's resolute showing. They were, however, helped out by those behind them. In particular, Anton Ferdinand had a good game. After replacing Bardsley early on, the ex-West Ham United man provided five interceptions. As he was up against N'Zogbia frequently, his good performance left the visitors having to explore other less effective options in order to find a goal. Indeed, in one of the few times N'Zogbia was allowed time to turn and run with the ball, he provided the assist for Mohamed Diame's superb opening goal.

With the exit through injury of not one but two strikers, and no attacking options on the bench, the Wearsiders required those in midfield to step forward and take up the mantle. There has been precious little of this so far in the campaign, but yesterday was the day Sunderland's midfield, lead by Jordan Henderson, stepped up. 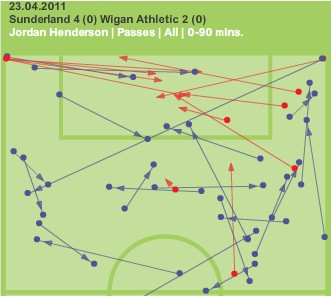 As shown, a lot of Henderson's activity came in the opposing half. Following Gyan's departure through injury, and with the small frame of Stephane Sessegnon having to lead the line, it was vital that Henderson and others offered the former PSG star as much support as possible.

This support came in abundance. Whilst it cannot be denied that Wigan collapsed catastrophically after the hour mark, Sunderland's pressure cannot be overlooked. As stated, Henderson was the central part of a three pronged attacking midfield also consisting of Sulley Muntari and Steed Malbranque. Between them, their constant pressure and direct play left the visiting backline unable to cope. 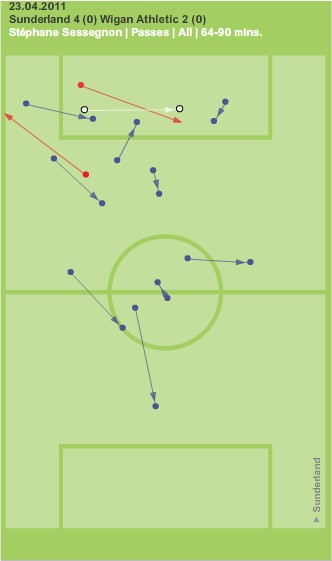 Shown above is Stephane Sessegnon's activity once he found himself as a lone striker. Mercifully, Sunderland chose not to simply hoof the ball in Sessegnon's direction. Instead they sought to play the ball into his feet, and the results of this were highly desirable.

The January signing was rarely wasteful in possession, and his industrious running all across the backline provided ample space for the three behind him to run into – as shown perfectly by Jordan Henderson's second goal. Sessegnon was the provider for that goal and got on the scoresheet himself, picking himself up to covert a penalty won via another of his insightful runs towards the flanks.

Sunderland's dominance in midfield won them this game. Whilst they did well enough when in possession before the disappearance of both strikers through injury, it was their new-found desire to provide attacking options that resulted in a second-half goalscoring blitz. In addition, their sudden change to a much more direct approach worked wonders.

All season long, fans have wished for Sunderland's midfield to venture outside of its comfort zone and take the weight of responsibility off the shoulders of their strikers - on Saturday this wish was finally granted. With the visit of Wigan resulting in more additions to their already lengthy injury list, one would be right to suggest the next month needs to see more of the same if Steve Bruce's side are to realise their ambitions of finishing in the top half of the table.