After a brief excursion whereby I found myself several thousand miles away from whatever disastrous spectacle Sunderland served up, I returned to British shores with a familiar result to dissect. No wins (in the top flight at least) at St. Andrew's since 1983 filled no one with confidence and, sure enough, Steve Bruce and his side left Birmingham on the back of a 0-2 defeat that leaves them with a paltry one point taken from the last nine games. For once in recent times, however, the Wearsiders' performance didn't match the result, with the visitors superior in all areas but the most important one – scoring goals.

Injury problems in abundance dictated that, yet again, Mr. Bruce was unable to name an unchanged side. John Mensah's wholly unexpected injury in the previous weekend's debacle at home to West Brom necessitated a defensive reshuffle; Nedum Onuoha took up a central defensive role alongside Michael Turner, with Ahmed Elmohamady reverting to right-back. Despite last week's setback, Bruce continued with a 4-4-2 formation. In came Jack Colback in the middle for his first Premier League start alongside Lee Cattermole, with those two flanked by Stephane Sessegnon and a returning Jordan Henderson. Up front, the recently profligate Welbeck-Gyan partnership endured.

Throughout the season, Sunderland have struggled to score goals. With the departure of Darren Bent, and the lack of an incoming replacement for the Midlands-bound forward, this problem has been exacerbated greatly. Following another blank in the goals scored column on Saturday, the red and whites have now scored just three times in their last seven games – it is little wonder their form has gone south so dramatically. 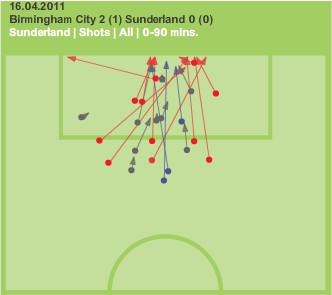 Whereas in recent games the issue has been a shyness in front of goal, Saturday's issue was simply that the away side were exceedingly wasteful. As shown by the graphic above, the Black Cats peppered Ben Foster's goal with efforts (23 in total), yet only three of them were on target. More worryingly, of their two strikers, Gyan register a shot on goal, whilst Welbeck was able to call Foster into action only once.

Granted, much praise must be given to the resolve of Birmingham, the hosts blocking the considerable tally of nine shots over the course of the game, but it cannot be denied that Sunderland were very poor at making their dominance in possession count.

On the contrary, the home side had less than half the amount of attempts on goal as their hosts (10), yet managed the same amount of shots on target – converting two thirds of them. In truth, there was little tactically wrong with Sunderland's defending at St. Andrew's. They were instead let down by two individual mistakes. In my opinion, the blame for both goals lies at the hands of goalkeeper Simon Mignolet; the first came from him calling for the ball and then failing to fulfil his subsequent duty to claim it, whilst the second goal was a long-range effort which the Belgian should have been able to divert wide of the goal.

Despite the result, Sunderland can take heart from this game. Aside from an onslaught in the opening five minutes, they controlled the game, being particularly dominant in possession considering their willingness to cede control of the ball in recent months. 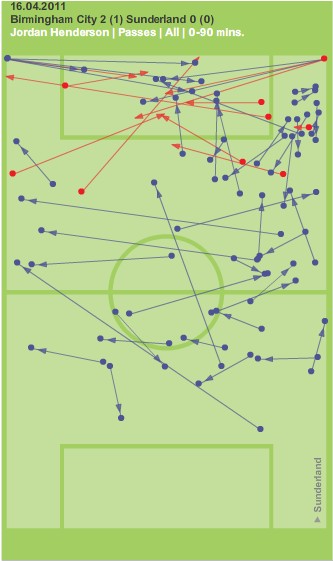 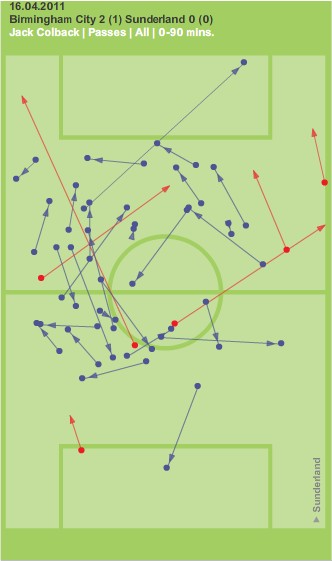 The introduction of Jack Colback, though at first met by many with scepticism, proved to be a wise move by Steve Bruce. Much of the reason the away side controlled possession was the youngster's ability to show a calm head on the ball and find a team-mate with his resulting pass. Prior to his substitution with fifteen minutes remaining, the 21 year-old misplaced just six of his thirty-three passes.

Also noteworthy was the performance of Jordan Henderson. Looking revitalised after a recent rest, the England international seemed to be back to his old self, rarely misplacing a pass and often being incisive when moving the ball on. Indeed, as has already been noticed by Michael Cox (of Zonal Marking fame), Henderson created seven goalscoring opportunities, more than anyone else in the Premier League this weekend.

It might be said that Henderson's good performance was down to him occupying a wider role than he has in recent months. It certainly seemed that he was more comfortable when on the right, though he was also helped by the attacking presence of Elmohamady, who looked to support him often, and gave the Black Cats another dimension going forward.

As has already been mentioned by Michael Graham in his post-match report, once Sunderland settled, manager Bruce reshuffled his team. Stephane Sessegnon, a man who seems more suited to a role in between the midfield and forward line than he does out wide, pushed forward to join Gyan and Welbeck in a three-pronged attack. Subsequently, the midfield three of Cattermole, Colback and Henderson moved noticeably closer to one another. 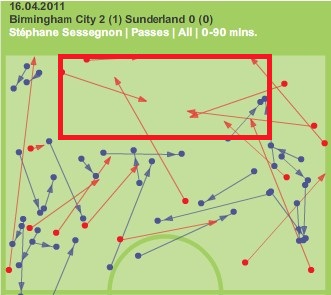 This freer role allowed Sessegnon more time on the ball and the chance to roam, created more trouble for the opposing defence. However, the Benin international displayed the kind of attributes that have left Sunderland fans wondering of late whether a not the man signed in January will be able to live up to the hype his transfer generated on Wearside.

As shown above, whilst his passing was mostly successful outside the Birmingham City penalty box, his attempts to move the ball to Gyan or Welbeck in the area rarely found their desired end. 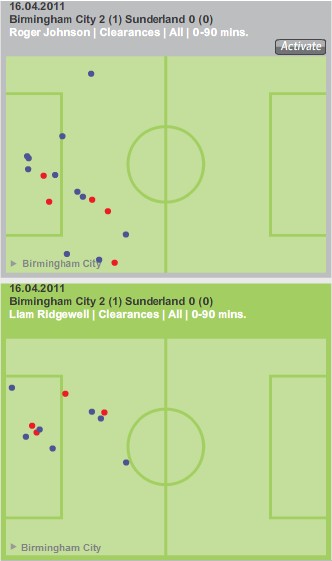 Here though, credit must be given to McLeish's side. Johnson and Ridgewell, now well respected as a solid defensive unit (even given their side's lowly league position this term), had very good games on Saturday. As the above graphic shows, they were successful with the vast majority of their clearances.

Steve Bruce, who has looked woefully short of ideas in recent weeks, was right to change things up once his side gained a foothold in the game. Their dominance throughout was evidence of this. The Birmingham defence held firm though, and a visiting side short of both goals and confidence was unable to breach it.

It is hard to know what to say after a game such as Saturday's, from a Sunderland perspective. They, for the most part, did little wrong, and one would struggle to suggest another way Bruce could have looked to change things to allow his side to impose themselves upon the game. It is true the home side were excellent defensively, but the visitors' own wastefulness in front of goal and, of course, their moments of horror at the back, were the key factors in why this game ended as it did.

If the Black Cats play like this again between now and the end of the season, they will surely pick up more points than they drop. The problem is, especially after a good performance yielded zero points, that is a very big 'if'.