Another week, another tactical mess for me to sift through. Cheers Steve. This week it was West Bromwich Albion's turn to benefit from Sunderland's tactical malaise. Readers of my 'Captain's Blog' feature will no doubt have noticed that merely days after I called for the club to actively seek answers to the question of why we get so many injuries, Steve Bruce has publicly announced his intention to begin an investigation into it. Well, I can only assume that if he also read my tactical analysis of the Manchester City game, he decided to take a bit of pity on me and save me the bother of having to analyse a fresh tactical approach by not really changing much at all except the names on the team sheet. So, for those who can stomach it, lets look at Saturday’s game in a little more detail.

With results of late starting to resemble a middle-order batting collapse that would even make an England cricket team from the 1990s cringe, Bruce decided that it was the players, and not the system, that was the root of the issue. Four like-for-like changes were made to the team with Elmohamady replacing Jordan Henderson on the right of midfield, Nedum Onuoha replacing Anton Ferdinand at right back, and there were recalls for Kieran Richardson and Steed Malbranque in midfield in place of January recruits Stephane Sessegnon and Sulley Muntari. Danny Welbeck and Asamoah Gyan continued up front in a 4-4-2 formation.

The visitors came with a typically rigid and disciplined Roy Hodgson set-up of two solid banks of four, with Simon Cox supporting Peter Odemwingie in attack.

With Bruce essentially backing his system over his players, there was once again a lack of naturally left-sided players on our left flank. But although Richardson was not manning the flank himself, he was still able to make real improvements to the balance of the team by ensuring the space was used. Before he went off at half time through injury, Richardson manipulated the ball on numerous occasions to provide players with very good possession on the left. As we can see below, his replacement, Bolo Zenden, was unable to follow suit, and the imbalance once again resurfaced in the second half. 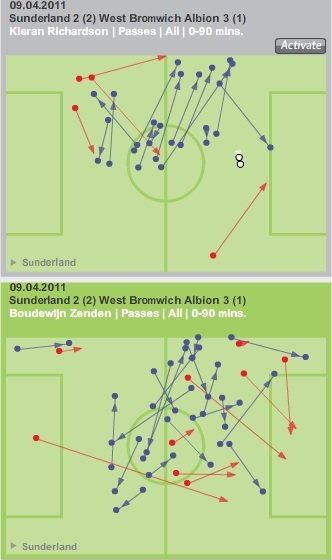 For all we can sit here and lament our own team, Paul Scharner's dominant midfield performance must be properly acknowledged. The Austrian was tasked with protecting his back four from a deep central midfield position and performed the task expertly. He used the ball well when in possession to relieve the pressure on his defence but where he really excelled was when contesting the ball. With Sunderland again overly-reliant on their right for their attacking impetus, Scharner was quick to read the play and get himself in a position to provide a formidable first line of defence. 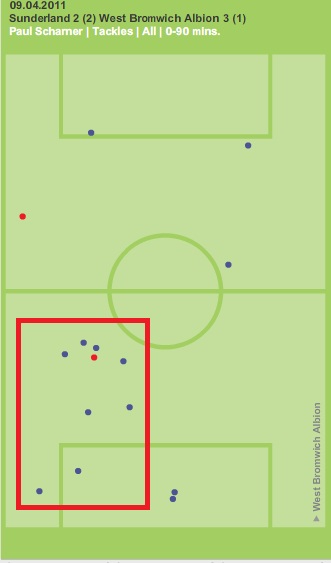 Starved, wayward, and wanting in front of goal

With Sunderland's right hand side rendered impotent by Scharner's combative presence, attacks on goal were rare and powder-puff. In fact, Phil Bardsley's thunderbolt was the only shot on Scott Carson's goal from a Sunderland player all afternoon which was on target. This is not to say that Danny Welbeck and Asamoah Gyan can be absolved of blame entirely, snugly tucked in behind the "no service" excuse, though. The pair struggled to protect the ball all afternoon, often more intent upon trying fancy flicks and show-boating. In fact, Welbeck only attempted one pass to his strike partner all game. All of this resulted in WBA's goal living a remarkable charmed life and Sunderland never really looking like asserting any prolonged pressure, never mind adding to their already somewhat fortuitous scoring. 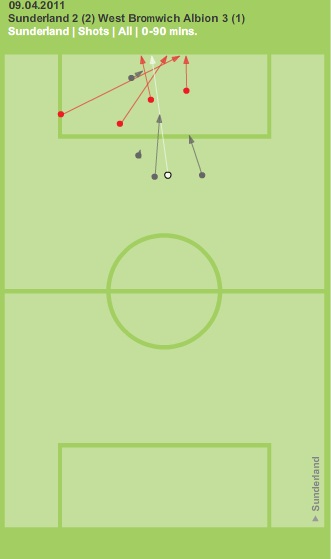 This was a game in which we were all desperate to get back to winning ways, but ultimately it was a bit of a disaster. Bruce gambled upon his belief that his players had let him down recently by slotting fresh names into the same system. Clearly players are low on confidence and making mistakes, but with the same old limitations being exposed and ultimately both the result and level of performance remaining unchanged, Bruce must devote some time to looking at the system. If it was working before, it has been found out, and Roy Hodgson and Paul Scharner will not be the last people to realise you need not stray far from your left side of the pitch to completely blunt Sunderland's attacking threat.

There was no surprise in seeing a well-drilled and highly organised Roy Hodgson team arrive at the SoL and it was up to us to break them down. Hodgson sets his teams up to make his opposition need a bit of quality or a slice of luck to break them down. We got both, yet were still pretty well beaten. How depressing.

For more discussion, and a look forward to the weekend, subscribe to The Roker Report Podcast, now on iTunes!