On the back of four successive defeats, Sunderland were left with the daunting task of a trip to The Emirates on Saturday to face Arsenal. However, the Black Cats could at least afford themselves some optimism prior to kick off; Steve Bruce's side went into the weekend's fixture unbeaten in their three previous visits to the capital this season. They left with this record firmly intact, grinding out a 0-0 draw which severely dented the host's Premier League title ambitions.

Arsene Wenger's side, with the crushing blow of last week's Carling Cup Final defeat no doubt fresh in the memory, lined up in a 4-5-1 formation. With Robin van Persie sidelined through injury it was Nicklas Bendtner who got the nod up front, supported by the flair of Andrey Arshavin, Jack Wilshere and Samir Nasri respectively. Abou Diaby and Denilson acted as deep lying central midfielders, whilst Laurent Koscielny and Wojciech Szczesny retained their places despite the calamitous mix-up at Wembley six days earlier.

Sunderland also operated in a 4-5-1 style, but a much more reserved one than their opponents. The visitors played much of their attacking football on the break, instead focusing on solid defensive positioning. As a result, Kieran Richardson played a lot deeper than in recent weeks, often finding himself alongside Sulley Muntari and Jordan Henderson. Instead it was Stephane Sessegnon, deployed on the right wing, who supported Asamoah Gyan most frequently. Simon Mignolet continued in goal, whilst Steed Malbranque replaced Ahmed Elmohamady. Danny Welbeck was deemed fit enough to only make the bench, so Gyan remained the Black Cats' sole front man, though Welbeck made an undeniable impression when brought on as a late substitute.

Make no mistake about it, this was an enormous team effort by Steve Bruce's side. From back to front, Sunderland defended admirably throughout. Asamoah Gyan, a striker, found himself winning no less than two thirds of his tackles in the game (12 from 18). Many of these were made around the halfway line, and were crucial in stopping the Gunners moving quickly into the Sunderland half. 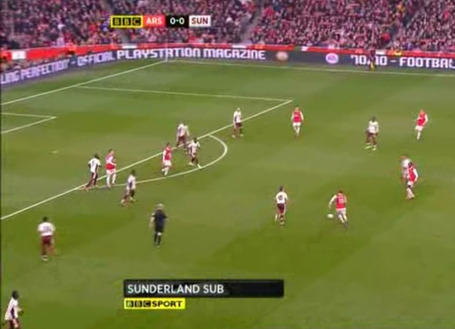 As shown above, the Black Cats ensured they defended in numbers to stop the home side breaking through. Here, all ten Sunderland outfield players are behind the ball, making it nigh on impossible for Arsenal to find a way through.

Sunderland's defensive shape was excellent also. As shown in the chalkboard below, they were successful in well over half of their tackles (46 from 75). This was born from the way they set themselves up when defending. For the most part, the back four worked excellently as a unit; the few times they didn't, fortuitous decisions came to their rescue. Further up the field, as stated, Richardson joined Muntari and Henderson in central midfield. This both closed up the space available for crafty players such as Nasri and Wilshere, as well as ensuring that, if one of Sunderland's central midfielders did choose to push forward when his side had the ball, the space he vacated would be filled by a team-mate. 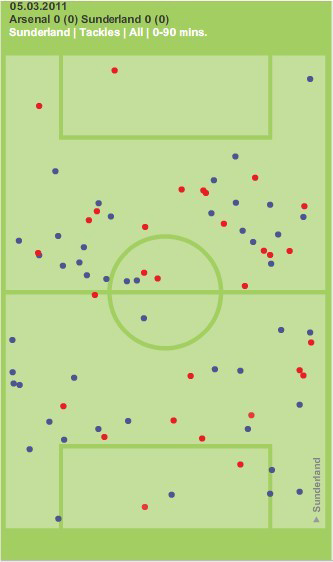 This is not to say, however, that Steve Bruce's side simply "parked the bus". When they did claim the ball, Sunderland looked to attack quickly on the break, with the pacey Stephane Sessegnon often the man venturing furthest forward to support Asamoah Gyan.

What must also be mentioned is the perseverance with which the visitors pressed and closed down Arsene Wenger's side. From the off, Sunderland's players were touch tight to their counterparts when they received the ball in the visitors' half. This clearly rattled the home side, as the Wearsiders dominated the early stages of the game.

Bramble and Mensah much improved

Last week at Everton, Titus Bramble and John Mensah were particularly poor in a team performance that was awful overall. This week, the two centre halves were outstanding. Though the media has made reference to their slices of fortune in the game, it mightn't be wrong to suggest their performances merited such luck.

Whilst the week previously they had faced up against two strikers and been frequently dragged into wide positions, Arsenal's decision to play just one up front meant this wouldn't happen at The Emirates. Instead, Bramble and Mensah had to keep their eyes open for any runners who broke through from midfield; it was a job they did, on all but one or two occasions, admirably. 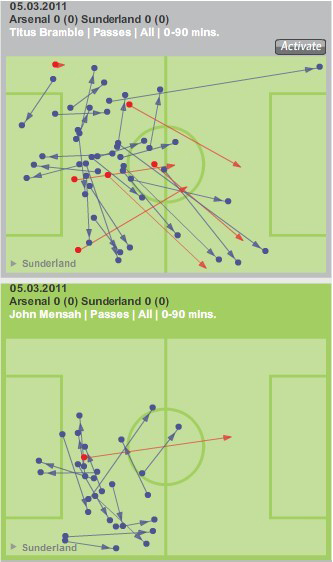 Importantly, when the two Sunderland centre-backs did gain possession of the ball, they used it extremely well. As shown above, between them, they misplaced only 7 out of 46 passes; this was vital, as their good use of the ball meant a respite from Arsenal attacks, giving them and the rest of the Sunderland side chance to recover.

For all their pressure in the second half, the Gunners were rarely incisive with their passing. As shown below, Andrey Arshavin in particular was poor when passing the ball in and around the Sunderland area. Furthermore, Samir Nasri, though displaying glimpses of brilliance, seemed more willing to go it alone, as opposed to threading key passes through to team-mates. 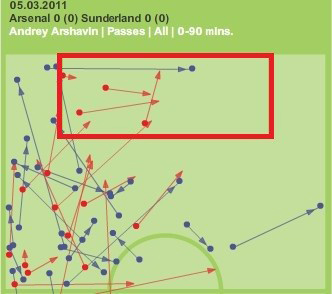 It was youngster Jack Wilshere who looked most likely to create an opening, and on occasions he succeeded; notably when Simon Mignolet was forced to make an excellent save from Bendtner just before the interval. However, for the most part, Arsenal were wasteful given the amount of possession they had in the second half. All too often they found themselves crowded out, and their passes into the final third went either to an area that wasn't particularly threatening to Sunderland or simply failed to breach the visiting backline at all. Unfortunately for the Gunners, on two of the occasions they did find a way through, both times Arshavin the recipient, they were undone by poor refereeing decisions.

It is undeniable to state that had two big decisions correctly gone Arsenal's way, Sunderland would have lost this game. However, that is not to say they didn't deserve to take something from it either. Still without a true holding midfielder, the Black Cats put in a stern defensive display, spearheaded by their central defensive partnership, and their goalkeeper did his job superbly when called upon. In addition, when in possession of the ball, the visitors looked to get forward, and very nearly nicked something at the end.

Arsenal, for their part, looked sluggish, except in odd spells where they turned things up a notch and were unfortunate not to score. On the whole though the Gunners laboured through this game and looked unable to break down a well drilled defensive set-up.

Graphics taken from Guardian Chalkboards and the BBC.