Unanimous agreement amongst Sunderland fans is a rare thing. However I am sure that Phil Bardsley has managed to inspire just such a thing this season. There cannot be many, if indeed any at all, who would not agree with the assertion that he is enjoying his best ever season in a Sunderland shirt and has shown a huge level of improvement from the player openly being offered around for transfer by Steve Bruce last summer. But while Bardsley has been winning the plaudits for his consistent and solid displays at left back, has the team been losing its balance?

At the start of the season, it looked like Kieran Richardson who would make the left back position his own. He had agreed and signed a new contract based upon the proviso that he committed himself to the position and was then handed the number three shirt. Richardson himself revealed he was training full time in the position. He then started the first five league games of the season at left back before getting injured. When he regained fitness, Bruce took advantage of Bardsley’s consistently reliable guardianship of the left back position and utilized Richardson in a variety of roles to cover the ever-increasing injury problems.

With the injuries starting to clear up and producing fresh options and renewed competition all over the squad, the time is ripe for us to look at the left back position again. Below is a map of the positions from which Bardsley tried a pass against Liverpool and the direction of them. 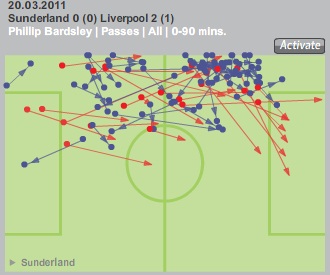 This has become a very typical Bardsley pitch map from his time at left back - failure to get near to the byline and just about everything pointing in field as he manoeuvres the ball onto his right foot. Right-footed left backs are nothing new, of course, with Denis Irwin perhaps being the most notable in modern times. Irwin was part of the all-conquering Manchester United team of the 1990s but the remit of Irwin’s role in that side was very different to the one attached to our left back position now. With Lee Sharpe or Ryan Giggs ahead of him, both touchline-hugging naturally left sided wingers, Irwin simply had to provide them with a solid defensive platform and enough of the ball to allow them to attack the byline. But Sunderland are lacking such an attacking left-sided player to play ahead of Bardsley, so the full back must take on at least a share of the responsibility to provide the width and balance in advanced areas. Bardsley is not doing that. In fact, it is an area in the Sunderland team in which no one at all is providing it. 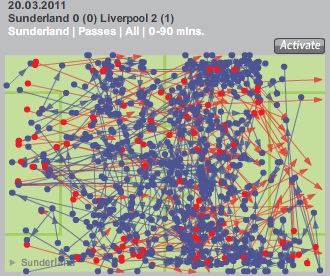 The above map shows that Sunderland are failing to utilize a huge amount of space approaching the byline down our left hand side. What a shocking waste. Did Jamie Carragher even require a shower or his boots cleaned after facing us at right back on Sunday? When compared to the right hand side of the pitch the imbalance of the side becomes very apparent. Such is the level of the imbalance, it becomes easy to see how to set up a defence against us at the moment. The opposition can comfortably commit bodies to over-crowd our right side to deny us the space in which to play completely safe in the knowledge that the resultant abundance of space down our left will not be attacked or used. To their credit, it is a plan Liverpool executed superbly on Sunday.

So would Kieran Richardson provide the balance that Bardsley is not? Well he is a naturally left footed player so that is a good start. While Bardsley’s natural instinct carries the ball in field to the congested centre of the pitch, Richardson’s natural touch directs play towards the touchline from where a penetrative forward pass is easier to deliver. This difference is best illustrated by the graphic below, taken from good home wins against comparable opposition, Stoke and Blackburn. The difference is striking, with Richardson not only attacking space in the final third more aggressively, but also using the ball more penetrative manner from deeper positions. Also apparent, is that Richardson’s presence at left back is allowing Sunderland to use the space behind the oppositions right back, whereas Bardsley fails to exploit it completely. 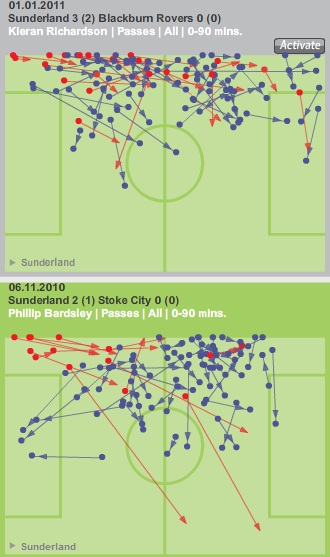 Of course, no one is blaming or criticising Bardsley for being right-footed, and his form, professionalism, and stoic defensive resolve must at the very least be acknowledged and applauded. The question being asked here is simply whether the left back position is the best place for the team as a whole to benefit from his talents. Whether we like it or not, we just don’t have the midfield players to provide natural balance on the left. Richardson himself has never even looked like impressing there and Zenden’s days as a flying winger are long behind him. Should we sign someone of the ilk of N’Zogbia or Downing this summer as has been suggested then the situation obviously changes, but for the here and now Richardson would appear to offer the kind of balance that no one else can and the kind of balance from which the entire team will benefit. It would allow us to make the most of the pitch, stretch the opposition’s defence, and create space in which our more creative players such as Muntari, Sessegnon, and Henderson could play their football. It all appears to boil down to a simple choice between Bardsley or balance, and the good of the team must sooner rather than later dictate that balance is the only sensible choice, with Bardsley receiving a pat on the back for his efforts and staking a very strong claim to regain his natural position of right back.