A hard-fought point fifteen days previously at Arsenal meant Sunderland welcomed Liverpool to the Stadium of Light on Sunday confident of picking up three points against Kenny Dalglish's side. The Reds, though dumped out of Europe in midweek, also arrived in a buoyant mood, following their 3-1 defeat over arch rivals Manchester United. As it was, a highly anticipated game was relatively low on quality. The visitors ran out 2-0 winners, with Sunderland hampered in no small part by several injuries and officiating mistakes.

The Black Cats appeared to have lined up in a 4-4-2 formation, with the incoming Danny Welbeck joining Asamoah Gyan up front. However, it soon became apparent that Welbeck was to play wide left in a 4-5-1, joining Muntari, Richardson, Henderson and Stephane Sessegnon in a five-man midfield. Steve Bruce kept faith with the same back five that secured a clean sheet at The Emirates recently, with Nedum Onuoha returning from injury to sit on the home bench. Just as Bruce's injury woes seemed to have disappeared however, they returned with a vengeance. Within the first twenty minutes, both Muntari and Richardson left the field with knocks, and Welbeck was to limp off in the second half.

Liverpool arrived on Wearside still without the services of their midfield talisman, Steven Gerrard. The Reds lined up with both Luis Suarez and ex-Newcastle frontman Andy Carroll on the field, however the freedom with which Suarez roamed suggested more of a 4-4-1-1 formation than a rigid 4-4-2. Raul Meireles and Dirk Kuyt occupied wide positions in midfield whilst Jay Spearing and Lucas Lieva sat relatively deep in the centre. Jamie Carragher, spared further punishment following his horror tackle on Nani two weeks ago, continued at right-back, with Glen Johnson on the left. Dan Agger, Martin Skrtel and Pepe Reina made up the rest of the Liverpool side.

No threat up front 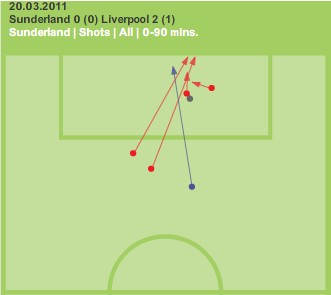 The above chalkboard shows the extent of Sunderland's profligacy in front of Pepe Reina's goal. Despite a promising start, the Black Cats failed to register a shot on target until the 85th minute, and that came in the form of a speculative effort from the defensive-minded midfield substitute Lee Cattermole.

Indeed, Asamoah Gyan and Danny Welbeck, Sunderland's two furthest forward players, failed to register a shot on goal. Such a lack of chances was partly down to good defending by the opposition (which will be discussed later). However, much of this problem came from a lack of creativity from midfield, along with Gyan's relative weakness against Agger and Skrtel.

In particular, Sunderland completely failed to break through the two banks of four Liverpool played with throughout and, as a result, failed to play many balls into the opposition penalty area. 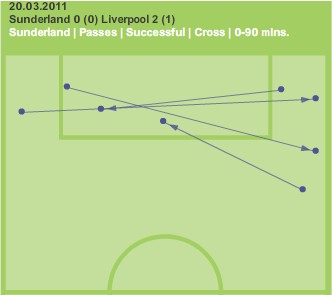 The above chalkboard outlines this lack of threat perfectly. In the entire 90 minutes, the home side were successful with only four 'crosses'. Upon further inspection, it can be seen that two of those crosses actually only found a man once they'd passed through the box to the other side of the pitch, meaning that only twice did a ball from a wide area find a Sunderland player in the box.

Given that only Gyan was playing up front, Bruce needed his midfielders to offer another option by breaking forward into the box. However, Liverpool's central midfield pairing of Spearing and Lucas negated this excellently, leaving their centre-backs with the easy task of dealing with just Gyan. The departure of Richardson through injury was a blow here for Sunderland, as was another ineffective performance from a low on confidence Jordan Henderson.

In spite of the odd exception, Kenny Dalglish's re-arrival on Merseyside has seen Liverpool tighten up significantly in defence, with Sunday's game a perfect example. From back to front, the Scotsman's side chased and hassled Sunderland to the point where the home side, particularly in the second half, gave the ball away any time they got near the final third.

In the first twenty minutes, in the guise of Muntari, Sunderland had a man who could find a defence splitting pass. In addition, Gyan and Welbeck showed good link-up play. However, after the injuries hit, and Welbeck was moved further forward so Sunderland were effectively playing a 4-4-2 formation, the Liverpool midfield cut off the service to the two Sunderland frontmen. 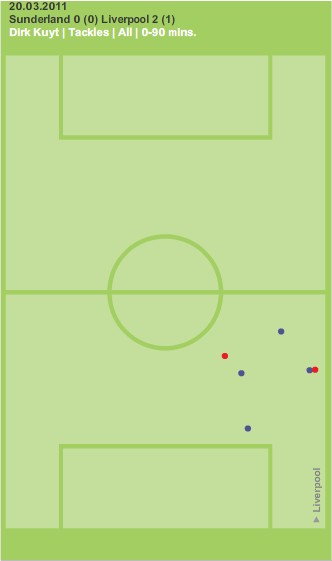 Dirk Kuyt, as ever, was a perfect example of Liverpool's teamwork defensively. Winning 4 out of the 6 tackles he attempted, the Dutchman personified the lengths Dalglish's side went to to stop Sunderland carving out a notable chance. Setting up with two banks of four, and complimented on set-pieces by Suarez dropping into his own half and the lofty Carroll retreating the the 18-yard box, the away side's constant chasing and pressure off the ball ensured they would leave the Stadium of Light with a clean sheet.

As already mentioned too, Sunderland were dominated inside the Liverpool box. The Merseysiders were happy to let the home side cross from deep, knowing full well that they possessed greater height in their backline. A glaring example came when the ball went out in the second half and it was uncertain whether Sunderland had won a throw in or a corner kick. Andy Carroll and the midfield immediately retreated to their area, as they would for a corner, before a decision had been made by the officials. Such was Liverpool's belief that they could win any high ball into the area, they weren't phased by the opposition gaining corner kicks. Until Ahmed Elmohamady arrived as a substitute, the Black Cats won almost none of their challenges in the Liverpool area.

No analysis of this match would be complete without devoting a section to poor officiating. The penalty that resulted in Liverpool's opening goal was farcical, and entirely changed the state of the game. Up until then the visitors had looked distinctly average, offering little going forward. The decision clearly rattled Sunderland, and the home side's bright early start frittered out into a game full of misplaced paces and little creativity. John Mensah's later red card, itself debatable given that Luis Suarez was not likely to gain possession of the ball, merely compounded Steve Bruce's misery.

However, Sunderland's main issue on Sunday came in the form of the additions to their treatment list. Sulley Muntari effectively ran the game for the opening twenty minutes, spreading the play and offering incisive through-balls to further advanced team-mates. His departure ruined the home side's early momentum; Kieran Richardson's departure minutes later further slowed the pace of their game.

In addition, no shots on goal until the last five minutes suggests a woeful lack of firepower up front. Asamoah Gyan was quite poor again on Sunday, but he is not helped by a midfield that is unwilling to get beyond the play and make their own opportunities.

Liverpool defended very well throughout, keeping good shape and restricting the Sunderland players' movement. However, until the penalty incident, they hadn't looked much like scoring themselves. Were it not for a moment of Suarez brilliance/Mignolet incompetence, the game would have rested on that bad decision from the officials.