On Wednesday David Boyle had the pleasure of hitting the road as the roving Roker Reporter as we were invited to the launch of the latest SAFC fanzine to hit the shelves of all good newsagents in the area and some not so good – Seventy3.

The magazine is the brainchild of lifelong Sunderland fans, and all round top blokes, Andrew Brewster and Mal Robinson who have taken the plunge into the media world with their brand of nostalgia, folklore and general retro SAFC goodness. The magazine itself is fresh and modern, full to the brim with features, articles and interviews with SAFC legends and past players such as Jimmy Montgomery, Gary Bennett, Nicky Summerbee, Darren Williams and Neil Wainwright with Michael Gray taking the helm as guest editor – an impressive list I am sure you will agree and this is only the first issue!

We here at The Roker Report have also been getting in on the act with resident scribes Simon Walsh, Gavin Callaghan and Chris Weatherspoon featuring within the glossy pages of Seventy3:

Chris has penned a fantastic piece on the inception of Sunderland as a football club and the history leading up to the FA Cup win in 1937.

Gavin has taken an indepth look at current Black Cat’s boss Steve Bruce’s managerial career, quite literally Geordie-born but Mackem-made and has also put his pundrity reputation on the line with his predictions for the remaining SAFC fixtures.

Finally, the man that got us into this fine mess, Simon Walsh, was interviewed for the magazine and gives an insight into the unprecedented rise to glory that The Roker Report has seen since the blog hit the world wide web just four months ago.

The Chesters Pub in Sunderland was the venue and some fine figures from SAFC’s illustrious past were
on hand to help the Seventy3 lads celebrate their first issue. The prolific goalscoring duo of Gates and Gabbiadini along with the wee Scotsman Bobby Kerr were all in attendance as well as the participants of the Q&A; Micky Gray, Nicky Summerbee and Sunderland’s only Olympic medallist, boxer and twitter-addict, Tony Jeffries.

The night kicked off with BBC Radio Newcastle broadcasting their Total Sport phone-in from the comfort of the bar, with usual hosts Simon Pryde, ex Newcastle defender John Anderson and Marco answering the calls and interviewing a number of the lads behind the magazine.

The looks on some of the Chesters’ locals faces were priceless as a constant stream of former SAFC stars strolled through the doors and propped up the bar!

The party then moved upstairs, with some great music from local Rat Pack tribute artist Paul Martin before
the Q&A session which was an absolute treat. Gray, Summerbee and Jeffries were on top form throughout and just for you Roker Report fans, here are a few of my favourite quips and tales from the night: 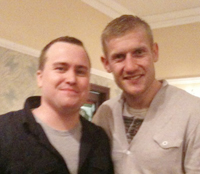 Above: Jaffa thinks boxing is boring, only does it because he is good at punching fellas. 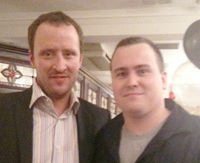 Above: The sleeping arrangements in the Summerbee household were suspect at times when Mike and George Best brought home their footballing friends after a heavy session.

Above: Mickey Gray vs. Wayne Rooney in a Manchester nightclub – KO victory for Rooney.

The lads are doing a few Q&A sessions around the North-East, so I don’t want to giveaway too many of
their gems, but suffice to say, I would thoroughly recommend getting yourself to any of their future Q&A’s, great entertainment.

By that time the free Bucks Fizz that the scantily clad young Seventy3 girls were dishing out left, right
and centre were beginning to take hold and I left Mal, Andrew and the lads to celebrate into the night.

Rumours that paracetamol sales in Sunderland were up this morning may or may not be true.