A little bit of Sunday fun for you all. People who have followed us on Twitter will be aware of this already, but for those of you haven't, or have only recently started following, here's the deal. We wondered what the ultimate Sunderland player would look like. Without simply saying Charlie Hurley or Kevin Phillips, we wanted to do something a little different.

We have constructed the ultimate player from body parts of former SAFC greats. A Frankenstein's monster if you will, who would be absolutely awesome on the pitch for the lads.

So we took to Twitter, and had everyone suggest who had the best brain, face, hair, arms, body, right leg & left leg. So here he is, I present to you, the ultimate SAFC player, voted for by you people, so no complaining, just think of the potential!... 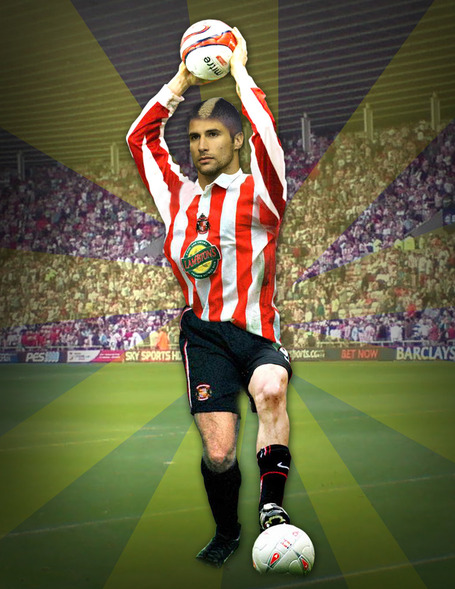 What a handsome beast eh? Let us explain it further.

The Brain - Brian Clough
Starting with the only bit you can't see, the brain. Brian Clough seems an obvious choice. A wonderfully gifted player, his instincts as a striker were second to none. Unfortunately his career ended early, but look at what he did in management, and maybe this Ultimate player could have went on to manage the lads.

The Face - Lorik Cana
Lorik was only here a short time, and he made much more of an impression on the female fan base than he ever did on the pitch. To quote my missus - "That one's got to be Lorik... mmmm Lorik... Why did you sell him you bastards!!" and it seems plenty of you on Twitter agreed, as he was the top vote-getter in this category. Oh, and we sold him because he's an arse, and not that good, even if he was quite a dish.

The Hair - Djibril Cisse
Djib came top of the hair vote, despite strong competition from Marcos Angeleri and Lionel Perez. The bizarre Frenchmans hair kept us very entertained, even when he wasn't scoring. A panel verdict decided Steve Agnew was not eligible.

The Arms - Rory Delap
Rory bleeding Delap. Why did you never demonstrate these incredible throw-ins at SAFC? Actually maybe you did and I was too asleep during that awful period for our club to even notice. Perhaps a controversial choice as he's not really much of a legend, but he had one fantastic attribute. Either way, very good at throw's, and would be a "handy" addition to the team. I'll get my coat.

The Body - (Sir) Niall Quinn
Niall's body was never exactly a temple, he was no Cristiano Ronaldo, it was just your bog-standard footballers body. Niall's regaled us plenty of times with tales about his drinking in his younger days, and he still put in some hellish performances, and was part of the most successful strike-force in recent SAFC history. Even beneath the skin, you'll find the heart of someone truly passionate about SAFC and the area, and even if his heart sometimes gets the better of his head, we all appreciate the passion.

The Right Leg - Nicky Summerbee
It's fair to say that this ultimate player isn't going to be a speed demon, so he better have good feet. Luckily he has two of the best in the business. Starting with Nicky Summerbee's right peg. Since Summerbee left in 2001, I don't think we've seen a better crosser, or even as good as, crosser of the ball in a red and white shirt. Buzzer was never blessed with skill or pace, but nobody could hit a ball like him. I'd genuinely put him up there with Beckham as far crossing goes.

The Left Leg - Julio Arca
A personal fave of mine, and clearly loved by everyone on Twitter too, as there were few challengers to Julio on this one. Julio's left peg was like a magic wand, he could do anything. Supremely skillful, the Argentine controlled games from left-midfield, left-back and even central-midfield. Unreal at times, truly was.

And thus concludes our ultimate player, imagine that brute dominating the Stadium of Light! The only problem would be where to play him? I'm thinking a free role behind the strikers. What do you think? Answers on a postcard, or TweetCard to @RokerReport

Thanks for all your nominations, suggestions and convincing arguments one way or another!!