Talking Tactics: Wolves (A) - Individuals To Blame For Molineux Surrender

Share All sharing options for: Talking Tactics: Wolves (A) - Individuals To Blame For Molineux Surrender

It is perhaps fitting that the Steve Bruce era came to a close in such predictable fashion. Played OK, created a bit, but lacked the conviction to stand up and be counted in the crucial moments and paid the price for it. A familiar story. Once again the mental fragility of the team was all too evident.

It was Eric Black who brought down the curtain with new manager Martin O'Neill watching from the stands, and the team that took to the field at Molineux was a Bruce-standard. Rigid, flat, one-paced, and lacking any discernible energy. But given that Eric Black was Bruce's tactical guru that wasn't a huge shock to many, and those who were shocked really ought to pay a lot more attention.

One pleasant surprise was the introduction of a second striker, as Ji came in for his first start for the club. Kieran Richardson apparently drew the 'left back' ball out of the 'Bruce and Black Tactical Tombola' this week. In opposition, Wolves employed a similar shape.

It was a curious week to do this feature in many ways given the total lack of tactical imagination from both sides. But whilst not strictly tactical, there is an oft-uttered cliché in football that applies perfectly to this defeat and goes a little something like this... Wolves simply wanted it more.

It was the hosts who won the key individual battles on the day, and that was why they took the points.

If I was going to go through every player who singular failed to show any discernible strength of character yesterday we'd be here all day, so let me pick out some key examples.

When Nicklas Bendtner arrived from Arsenal there were genuine question marks regarding his attitude. He made a very good start here but as the situation has worsened, his work ethic seems to be diminishing. Simply put, the more fight that is required, the less he seems willing to give. Bendtner proved a scandalously poor outlet for his team, losing 10 out of the 12 aerial challenges he contested and only winning a solitary header in the opposition half.

By contrast, Christophe Berra, the smaller man, was utterly dominant in the air, although it must be said that he did not have to work particularly hard to achieve it. Berra won all 10 of his aerial duels. To put Sunderland's spinlessness into context, our WHOLE TEAM won just 8. Unacceptable. 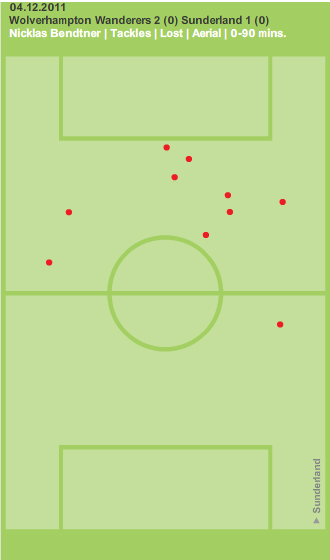 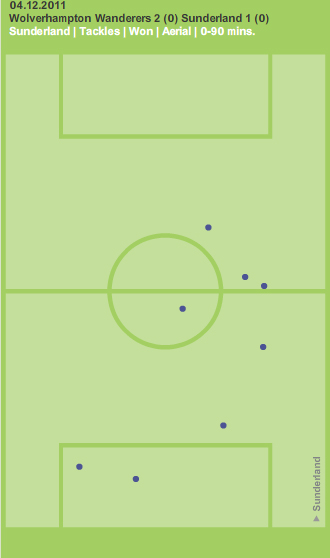 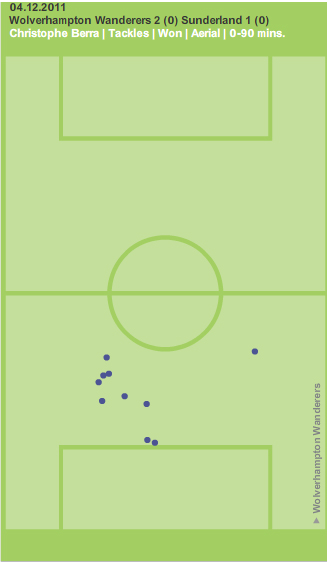 But Bendtner wasn't the chief architect for this latest surrender. I am afraid that dubious honour belongs to the last person who should have it - the captain. Lee Cattermole was pitted against Jamie O'Hara and completely failed to contain him. In fact, O'Hara was allowed so much time and space on the ball that he attempted more passes on his own (91) than our two central midfield players attempted between them (82).Cattermole simply never got close and failed to win a single tackle during the entire game.

The result of Cattermole's inability, or unwillingness, to compete was that O'Hara was able spread possession easily and regularly to the left wing, gradually pushing Sunderland's defensive line into retreat until the point where it was too deep and began to creek and ultimately fail. 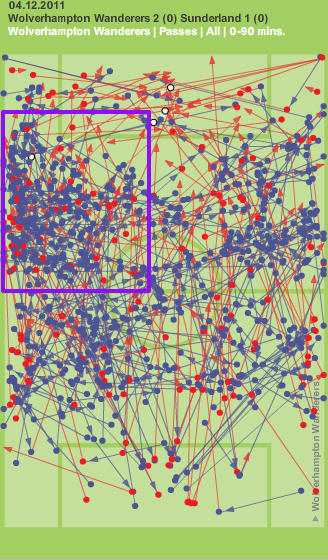 Lastly, and most familiarly, a total lack of conviction in front of goal probably proved to be Sunderland's ultimate achilles heel once more as they conspired to waste chances. Once again, the team created chances. Lots of them in fact. But simply lacked the killer instinct to take them. It is easy to point the finger at a lack of strikers, but these are not especially difficult chances that are being wasted. Examining the graphic below, we see that Sunderland are getting plenty of chances to test the goalkeeper from good central positions. Striker or not, there is little excuse to not be taking more of them. 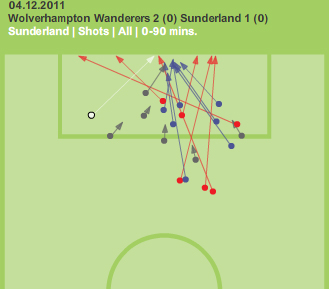 All these issues that effectively cost Sunderland the game at Molineux should, in theory, be easy pickings for a renowned motivator and man-manager such as Martin O'Neill. Tactically, although the usual issues remain and will be addressed in time, there isn't that much wrong. The side is creating chances and the margins in games are so fine. Fortunately, we are about to play our trump card in O'Neill, who is almost certain to provide his players with the confidence boost and belief to equip them to start standing up and being counted in the crucial moments.

Moving forward, who knows what tactical treats the new manager has in store for us. But this game wasn't lost on the tactical drawing board but in the mental application of the players. It is difficult to envisage O'Neill accepting that and allowing it to continue when he moves into the manager's office this week.