I will let you in on a little secret. I am not a 'Christmas person'. Never have been. I find festive frivolities mundane, intrusive upon my right to enjoy the blissfully undemanding company that my solitude provides, and frankly just too hug-intensive from start to finish. But something I do love about it is the boxing day football.

And so, we fled the threat of having yet more dry Turkey sandwiches relentlessly rammed down our throats and battled through the wind to the Stadium of Light for the home game against the bogey-men of Everton. Spirits were high, but it wasn't to be our day as Howard Webb saw fit to dish out a late Christmas gift to the visitors in the shape of a quite ludicrous penalty award that turned 3 points into 1.

Martin O'Neill continued his quest for stability by naming an unchanged team from that with played so well at OPR in midweek. Although injuries disrupted the personnel, the basic 4-4-2 shape did not change.

In opposition, David Moyes deployed his Everton team in something resembling a 4-1-4-1 system, with Louis Saha forging a lone furrow up front and the regular scourge of Sunderland, Tim Cahill, joining as often as possible.

Effect of the extra man in midfield

With the added insurance policy of an extra man protecting the back four, the rest of the Everton midfield were free to press the Sunderland defence high up the pitch, disrupting their rhythm in providing the midfield with quality possession. With options whilst in possession inside their own half reduced, the Sunderland defence were forced into settling for clearing their lines far too often, as noted below. 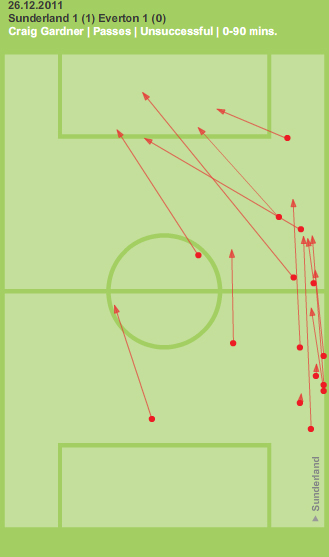 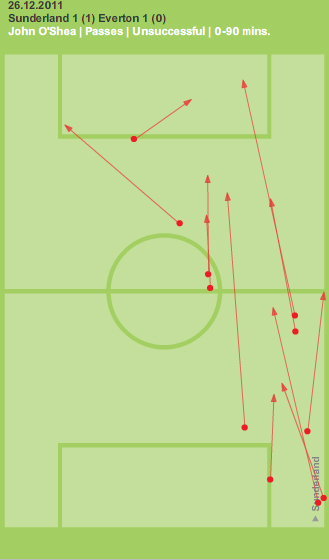 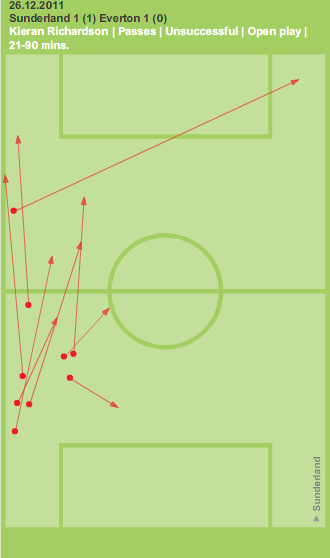 When presented with such images as above, the natural inclination can often be to criticise the individuals for 'Hoof ball', but in this case Everton must be credited.

So with being forced to play long more than they'd have liked, hopes began to rest on Nicklas Bendtner and his ability to battle for, and win, possession against the Everton defenders. At Loftus Road in the week the big daft Dane was just starting to show a desire ' to commit himself to the cause, as O'Neill put it, but he was very much second best at the Stadum of Light. 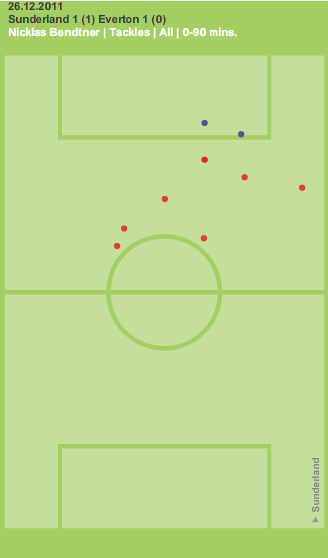 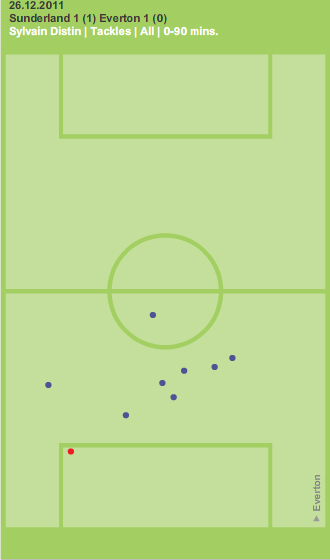 People will make up their own minds about what the above graphics say about Bendtner's work rate on Boxing Day, but either way it is abundantly clear that he was very much ineffective at providing his team with an outlet for the pressurized defence. The Toffees' defence was very much on top when contesting the long balls their midfield had forced.

It should be noted that we also acknowledge that Stephane Sessegnon was dominated while challenging for long balls inside the Everton half. We are not trying to just pick on Bendtner here. But it obviously has to be accepted that Bendtner is amply equipped to do considerably better than he was able to. It is also only fair to note that when in possession Bendtner did extremely well.

One player who did manage to maintain recent drastic improvement was Lee Cattermole. The Sunderland captain is perhaps the most maligned player on the club's staff, but he produced another powerful performance to follow up his revival at QPR and hopes must be high that Martin O'Neill can finally unlock the obvious potential that Cattermole possesses.

The skipper produced an all-action performance against Everton, using the ball both efficiently (a highly impressive 87% open play pass success rate from 46 attempts) as well as relatively imaginatively. Too often in the past he has been guilty of playing the safe pass that doesn't really progress his team's attacking efforts, but there was none of that this time. 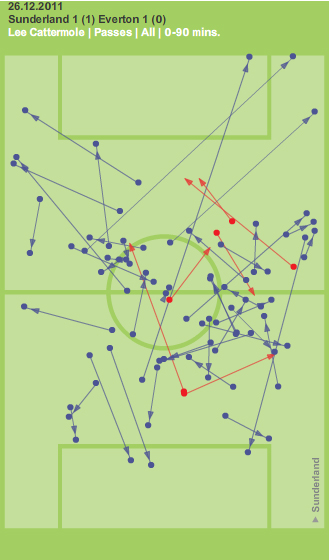 In addition to distributing the ball well, Cattermole was once again disciplined when not in possession, resisting the urge to go hunting the ball in poor areas and risking leaving his already outnumbered midfield overrun. He pressed in the right areas, retreated in the right areas, and was almost always in position to contest the ball in front of his back four where he is most needed. 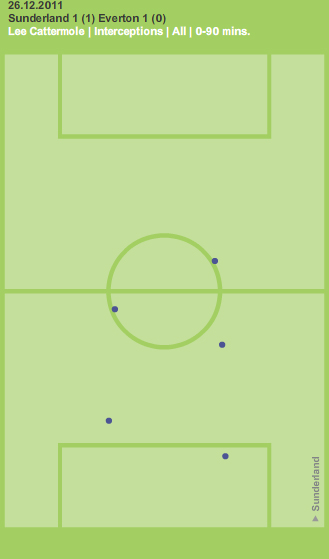 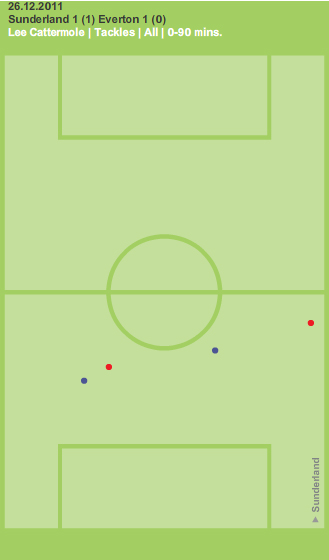 The focus after this game will be the Howard Webb gaffe that resulted in Everton's equaliser, but from a tactical perspective it was an enjoyable contest and real battle. Everton arrived with a clear plan and a lot of respect for their hosts and, from a Sunderland perspective, that the team were able to rise above a well executed plan by such a quality side and come away with something is very encouraging.

Lots of work still to be done, but O'Neill is quickly going about instilling a real steely core to this Sunderland squad and making them a tough nut to crack, even when they are not at the top of their game. Credit to both teams for slogging it out in tough conditions and producing an absorbing contest.