Ah, all stuffed with Turkey and the trimmings are we? Feeling like you over indulged slightly? Me too. Anyway, how did you get on with our quiz we set this morning? Or perhaps you're waiting for the answers to try them out on your loved ones.

Well, here's the answers. I doubt you needed to cheat to get them all right, but if you did, well you've made Santa cry. On his birthday no less. Shame on you. Anyway... ANSWERS!

1. Prior to moving to Roker Park, we played our home games at Newcastle Road.

2. At the moment, the most capped international in the squad is John O'Shea with 70 caps for the Republic of Ireland (according to Wikipedia)

4. The other two teams to achieve FA Cup success from outside the top flight are West Ham United in 1980 and Southampton in 1976.

7. Nyron Nosworthy has NOT played for Jamaica. He was called up, but never played. FALSE!

10. Pay attention. That was the right year and score, but it was Sheffield WEDNESDAY, not United who handed out the beating. FALSE!

11. We replaces STOKE CITY when entering the football league.

12. Gary Rowell has made the most appearances out of that lot with 293 games.

14. Kevin Ball actually scored the most according to SAFC.com, with a haul of 27 goals.

15. You might be shocked, but it's actually Ahmed Elmohamady with 42 caps. Again, so says Wikipedia, that's not the sort of thing people know off the top of their heads.

Who Am I? (Quickest gets the point)

Who was it? It was GORDON ARMSTRONG!

Name The Player From Their Career Path (Permanent Clubs Only)... 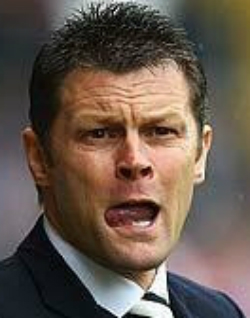 And if you needed the tie breaker, the attendance that day was a whopping 75,118.

Hope you enjoyed it and didn't cheat! You probably didn't need to though to be honest, it wasn't that taxing. Perhaps we'll do it all again next year!