Talking Tactics: QPR (A) - Serial Under-Performers Win It For Sunderland

Share All sharing options for: Talking Tactics: QPR (A) - Serial Under-Performers Win It For Sunderland

This was a game I was really looking forward to. We kind of knew how a Martin O'Neill team would approach games at home to Blackburn away at Tottenham. There is almost a preset mentality in this division for anyone in those fixtures. But an away game against a newly promoted side expected to struggle was a bit of a mystery. In the past, it is the kind of games in which we'd be overly cautious or overly confident, gifting the opposition three points either way.

But that was then. Would it be different now? Had anything really changed? This was the game in which we would know.

The Sunderland teamsheet saw two changes from Sunday's game at White Heart Lane. Lee Cattermole was given his first taste of football under his new manager as he replaced Jack Colback in central midfield, and Nicklas Bendtner replaced the injured Monolithic Menace himself, Connor Wickham. That meant that shape-wise nothing much changed at all. Kieran Richardson, he who belongs to Jesus, continued his December rebirth on the left side of midfield. Hmm... religion. May be there is something in that after all. Anyway, I digress.

QPR matched up with a similar system.

Fine plan, and they'd have gotten away with it too if it wasn't for those meddling kids!

Right from the onset, QPR appeared to target Phil Bardsley in the left back position as the weak link of Sunderland's defence. Not the worst sounding plan in the world, it must be said. The intention seemed to be to overload that side with players, drag defenders away tracking runs, leaving Shaun Wright-Phillips isolated one-on-one with Phil Bardsley. 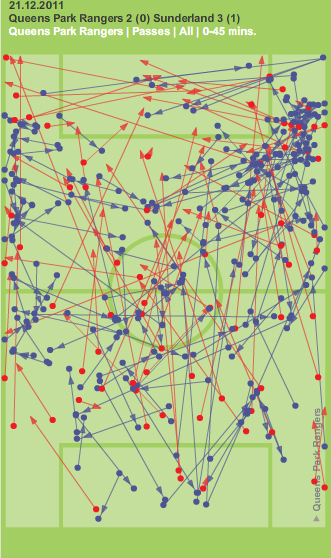 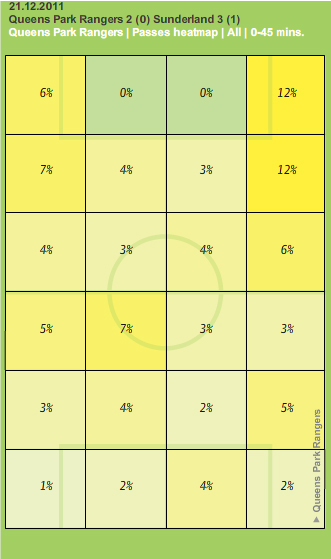 But by the time the players emerged after half time, the plan had been completely abandoned and Shaun Wight-Phillips was sitting on the bench. The reason for that is simple - Phil Bardsley and Kieran Richardson were just too strong for them to break. 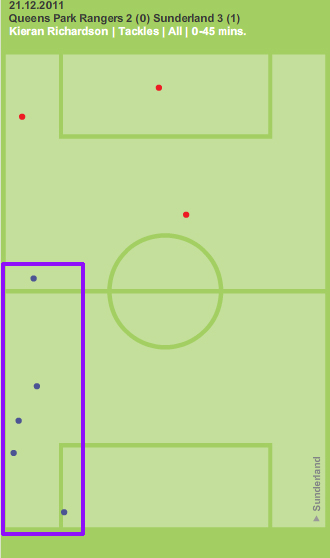 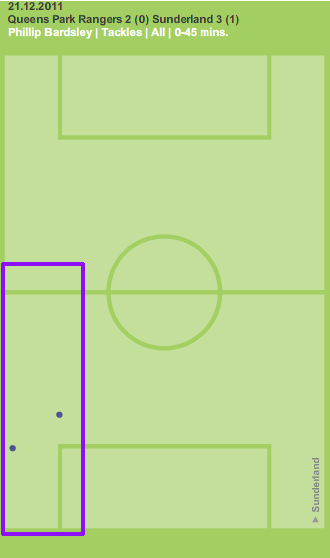 There was an added problem too. When play broke down on the QPR right, Kieran Richardson was able to get forward on the counter attack considerably quicker than 32-year-old Luke Young could get back.

Finally a Cattermole we can get on board with

If there is one way in which Martin O'Neill has made an immediate and telling difference it is in how Sunderland play without the ball. Under Bruce it was all very static. Statues stood around in rigid banks of four and very easy to run-off, making quality possession easy to come by for the opposition. But this was the area probably most responsible for this victory.

Lee Cattermole, it must be said, has been nothing but a frustrating enigma at Sunderland. We all know there is a very useful player in there, but we've never seen his energy and combative nature channelled properly. He can best be described as an agent of chaos. Leave him to his own devices and things will get pretty ugly pretty quick. At Loftus Road though he showed a level of focus that we have rarely seen from him, perhaps as a result of O'Neill simplifying his instructions to hold him on a tight leash.

The result was the kind of midfield performance we always knew he was capable of but rarely delivered. Gone was the 'Alsatian chasing a tennis ball' type of display so often seen in the past, and instead he maintained his position, kept his discipline, and looked to ensure he was in a position to intercept rather than lunge. He produced a remarkable 9 interceptions during the course of the game - over a third of Sunderland's total quantity. 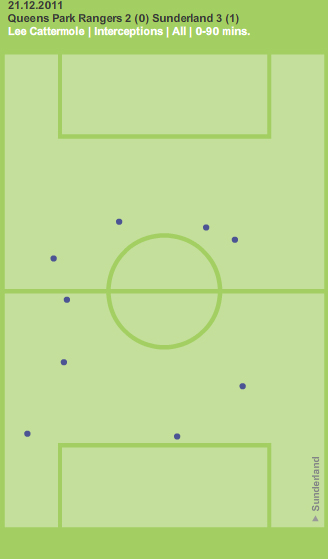 Making our own breaks

So... defending well - check! Winning the ball - check! Now what to do with it? The answer was counter attack, and Sunderland managed that with verve and gusto with Richardson, Sessegnon, and Bendtner the chief QPR tormentors.

In his post match interview on SAFCTV, Martin O'Neill described 'holding it and turning' as the essence of centre forward play and Sessegnon in particular provided a masterclass of it. 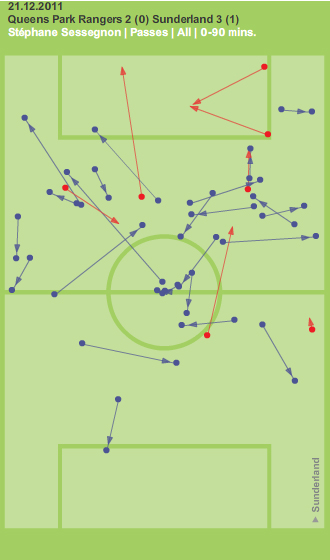 The above is pretty much what you want to see from Sessegnon week in, week out. Very little in his own half, elusive, and plenty of blue dots. You get that from Stephane Sessegnon, and Sunderland have provided a genuine attacking threat. Simple as that. Just like with Cattermole there is also evidence of considerably more clarity in his mind regarding his role in the team. Keep yourself up the pitch, get it, turn, and play, seems to be the instructions he took onto the pitch.

Bendtner must also take a mention for his role. He wasn't as eye-catching as Sessegnon but he occupied defenders and provided a platform for Sessegnon and Richardson to play from on the counter. Good, simple, effective centre forward play. He must be feeling unwell, bless him.

What can we say, really? We looked at this game as a measuring stick to see if anything had truly changed, and by golly it has. O'Neill has quickly made Sunderland hard to beat with simple organisation and making higher demands of players when the team is not in possession. When the team has the ball, there is a clear intent to play on the break, and previously much-maligned players have suddenly started to become aware of their specific duties to the team, enabling them to produce their best.

From a tactical point of view, it is pretty much all hugely encouraging.