Share All sharing options for: Talking Tactics: Tottenham Hotspur (A)

Martin O'Neill, fresh off the back of a debut victory last weekend against Blackburn Rovers, opted for an unchanged line-up as he took Sunderland to White Hart Lane for a tricky tie against Tottenham Hotspur.

As a result, the Black Cats' formation remained unchanged too, with the Irishman selecting a 4-4-1-1 style with emphasis on getting the ball out wide. Furthermore, the 'one' - Stephane Sessegnon - behind the lone striker - Connor Wickham - became part of a midfield five when defending, as the red and whites looked to stifle a Spurs midfield boasting talent in abundance.

In the end, O'Neill's side went down 0-1, but this was a performance full of positives. Spurs have been in supreme form for much of the season, playing arguably some of the most attractive football in the league - but they struggled to really get going here. Commentator Tony Gale (yes, that beacon of impartiality) frequently surmised that Harry Redknapp's men were nervous given their high league position, but this is a view which does not credit the performance of the visitors nearly enough.

With the likes of Rafael Van Der Vaart, Luka Modric and Aaron Lennon in the middle, combined with the grit of Scott Parker and Sandro, Spurs lined up with a fairly formidable central partnership. That Parker and Sandro are not devoid of flair either adds to the bulk of attractive attacking options behind Redknapp's chosen lone frontman on Sunday - Emmanuel Adebayor.

As a result, much of how this game went would focus on Sunderland's ability to stop that midfield playing and carving out chances.

Despite defeat, Martin O'Neill's men were highly successful in their aims. Of the staggering 61 tackles attempted by the visitors, they were successful in 40; they lost only two in their own defensive third of the field.

With Aaron Lennon exiting within half an hour through injury, the main focus for Sunderland came in stopping Van Der Vaart and Modric. 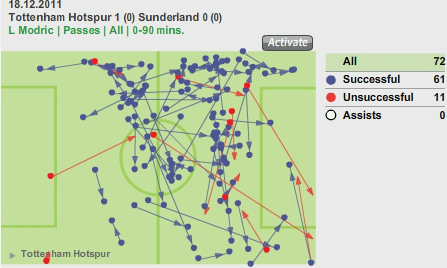 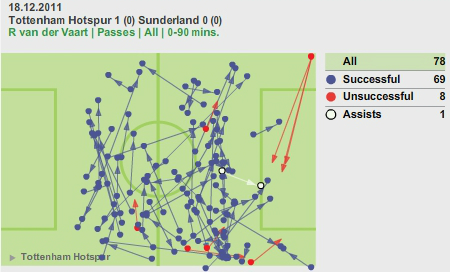 A look at the above chalkboards, and the lack of key passes into the area from the Dutchman and Croat respectively, suggests the likes of David Vaughan and Jack Colback did their jobs well. Credit too, must be given to the likes of Kieran Richardson, Seb Larsson and the backtracking Sessegnon. With regards to Richardson and Larsson, their work in going narrow when without the ball was vital in cutting off creative players, as, logically, it reduced the room in which they could work their magic.

There were occasions when a sublime pass cut through this rearguard action - see van der Vaart's knife-edge ball to Sandro in the first half - but on the whole Sunderland performed extremely well against this impressive midfield.

Consequently, Spurs had to look wide at their full-backs when attacking. This is mirrored in the staggering number of attempted passes by left-back Benoit Assou-Ekotto; 90, more than any of the Spurs midfield could individually muster.

This is a lot, but it is much preferable to having the likes of Modric et al. looking, and eventually managing, to thread endless passes through the middle. Sunderland were much more content to deal with balls in from wide areas, trusting centre backs Titus Bramble and Wes Brown to deal with Adebayor should they need to.

Spurs step it up

Tottenham won this game of their own merits. Redknapp, recognising a change in tempo was needed if Sunderland were to be broken down, told his side soon after the break to up it considerably.

They responded immediate and, sure enough, a goal came. Utilising pressing when without the ball that Barcelona would have been proud of, the home side forced Wes Brown into giving the ball away sloppily. From there they attacked with pace, Van Der Vaart providing a breathtaking reverse pass to Roman Pavlyuchenko, who rifled the ball into the far bottom corner.

It was a goal worthy of winning most games, and though Brown was indeed at fault for losing the ball a little carelessly, the relentless pursuit of that ball by the men in white was the goal's initial catalyst.

Far from settling for that, Spurs went for the jugular, refusing to relent in their pressing game. Time and time again as the game wore on, Sunderland players found themselves surrounded by two of their opposers. With Nicklas Bendtner offering little up front, and the others themselves tired from their earlier defensive exploits, the fitness of the home side was key in them ensuring victory here.

One of the real negative aspects of Steve Bruce's Sunderland legacy is the sheer lack of attacking options now at the club's disposal. For whatever reasons - we can lament/argue/bludgeon each other over the departures of Gyan and Bent until the Mags win the title, it's not really that important anymore - the squad now finds itself with just one established Premier League striker.

That striker is Nicklas Bendtner and, following an impressive start on Wearside, he seems to be plunging new depths of ineptitude with each passing game.

Following his recent indiscretions away from the field (as if he doesn't commit plenty on it?!), it was unlikely the not-so-great Dane would start on Sunday. So it proved, but once Connor Wickham unfortunately fell injured once again, O'Neill had little choice but to introduce Bendtner after the break.

In hindsight, he may as well not have bothered. 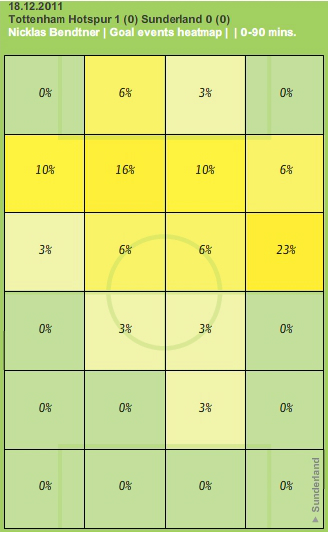 As shown, a startling lack of Bendtner's activity actually came in the central striking role - the very position he is designated to play in. His foraging for the ball in wide areas may seem all well and good, but it merely serves to put extra stress on the midfielders behind him to break forward at pace in order to provide the side with a goalscoring opportunity. Given that they were already gifted a hefty defensive workload, it was unsurprising that with Bendtner on the field the Black Cats struggled to create any great chances of note.

It points to a wider issue of selfishness, and perhaps laziness, in the Dane's general play. At one stage in the second half he chose to fire a tame effort at Brad Friedel when a pass was clearly the better option, while his reaction when he fails to win the ball in a challenge is often one of apathy - as opposed to an immediate attempt to win the ball once more.

There was a fleeting glimpse of his potential quality when he combined with Sessegnon late on only to lash wildly over, but for the most part this loanee seems to be adding less and less to the Sunderland cause.

Connor Wickham wasn't exactly pulling up any trees in the opening half - nor should he be expected to, given that he is still developing - but he at least showed some heart and physical presence. With Ji Dong-Won not looking up to the rigours of the Premier League, and Fraizer Campbell perennially injured, it will be no surprise to find Martin O'Neill looking for a triker (or two?) come January.

All in all, there were more positives than negatives for Sunderland and O'Neill yesterday. Spurs, though perhaps not worthy of contending for the title just yet, will certainly go close to returning to the Champions League come May, yet the visitors mostly matched them here.

As is to be expected from the home side, and particularly one with such creative talent, Redknapp's men enjoyed vast amounts of possession - but for the most part they were unable to do very much with it.

Luka Modric's glaring miss should have made it 2-0 and sealed the game, but perhaps Sunderland deserved such a smidgeon of luck. In the end, it took a buoyant and unrelenting second half performance from Spurs to see of the red and whites - it was a marked improvement from the recent lethargic defensive performances fans had become accustomed to.