Golly. I am not sure I know how to do one of these after a win. My usual checklist, shown below, doesn't seem to cover anything useful.

As you can see, I am pretty much flying blind here, but I'll give it a go anyway. Here's our tactical re-cap of a WIN against Blackburn Rovers...

Those of you enlightened enough to listen to our Podcast last week will know that we genuinely didn't have a scoobies about what to expect from team selection and shape for this game. That was a relief after the Bruce era of soul-crushing predictability.

In the end, and probably wisely, O'Neill decided against sweeping changes. Steve Bruce's 4-4-1-1 was trotted out again, but it was tweaked sufficiently to resemble an actual organised and reasonably pragmatic football team. That is to say it was designed to utilise both flanks, rather than just the right one, and players were allowed to get into the box.

With Nicklas Bendtner missing through injury, there was a shock recall for a barely fit yet hugely willing Connor Wickham. He was joined in attack by Stephane Sessegnon. Meanwhile, Titus Bramble was brought back into the heart of the defence allowing Kieran Richardson to provide balance on the left side of midfield. David Vaughan was the man drafted in to deputise for suspended captain Lee Cattermole, with spectacular results.

Blackburn deployed Chris Samba, Paul Robinson, and their 9 training dummies in a similarly shaped system, pretty much exclusively in their own half.

It really didn't take O'Neill long to figure out what the Sunderland team needed. 'That's management', Brian Clough would say. Within one solitary week he had addressed what Bruce seemed oblivious to during his entire reign. Stretch the pitch with natural width on both sides of the pitch, get people forward, and don't be afraid to throw a cross into the box. Below are pitch map of Sunderland passing from their last two home games. 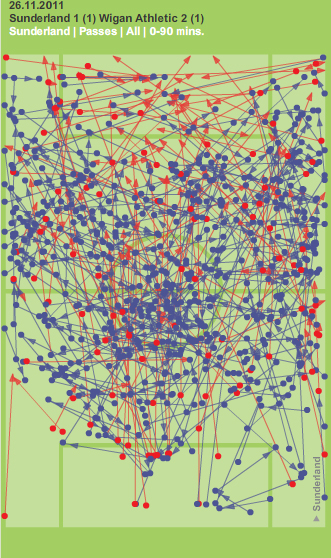 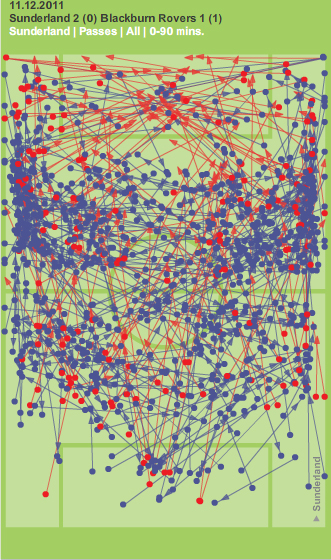 The Blackburn map (on the right) shows a remarkable level of both width and balance. Kieran Richardson (and later James McClean) and Sebastien Larsson had clear instructions to hug the touchline and provide shape and an outlet for the midfield. The natural result was crosses, and oh my how the crosses reigned down on Chris Samba's head from all angles. The clear emphasis on width in O'Neill's use of Bruce's squad is certainly striking when compared with his predecessor's system.
Ultimately, it didn't result directly in a goal, but what it did was create sustainable pressure forcing Blackburn to drop deeper and deeper as the game progressed. I noted last week that Jamie O'Hara's unopposed distribution to the left wing at Molineux had the same effect, but this week it was our turn to benefit.
Below is another pair of graphics, showing a stark contrast with Sunderland's last home outing. 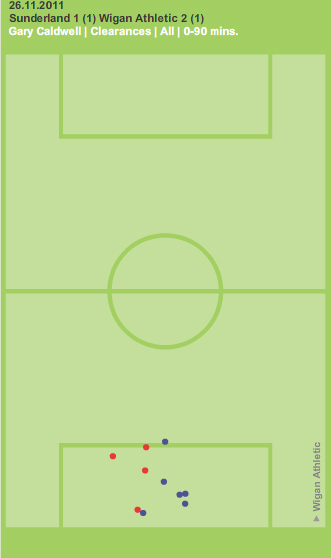 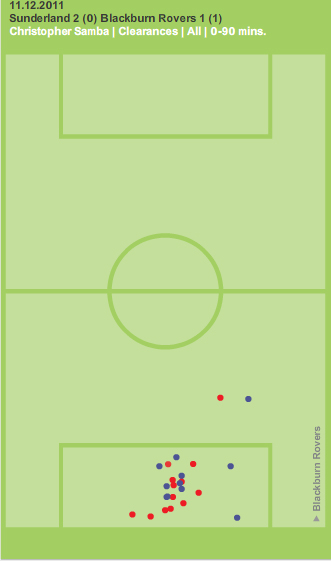 There are two things that are striking about this comparison between Gary Caldwell's afternoon in Bruce's last game in charge of Sunderland and the one that Christopher Samba endured at the Stadium of Light. Firstly, Samba was called into action on considerably more occasions that his Wigan counterpart (24 times as opposed to 10).
What is perhaps most striking though is the positions from which the Blackburn captain had to clear the ball. They show evidence of Sunderland delivering more consistent attacks into much better areas. Sunderland delivered almost double the amount of crosses against Blackburn as they mustered against Wigan, and the pressure finally told as Vaughan walloped in the equalizer first time from a poorly cleared centre.

When Blackburn came out after half time they appeared so chuffed with their goal that they decided that they were delighted to go however far it took them, but under no circumstances any further. I'd love to sit here regaling you with a tale of how Sunderland's dominance forced Rovers to surrender half the pitch, but the fact is they did it willingly. 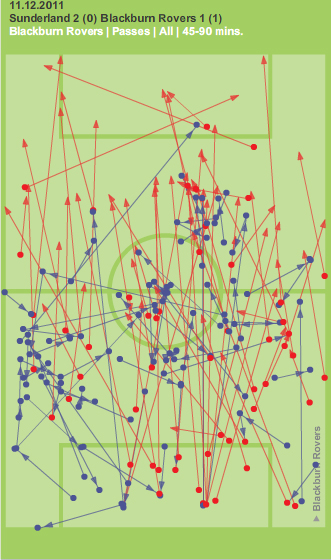 The above graphic looks more like an Ice Hockey penalty kill than half a football match. For those unfamiliar, in Ice Hockey when a team is at a temporary numeric disadvantage with one of their players serving a penalty, their single purpose is to sit in their defensive zone and clearing the puck the length of the ice at every opportunity, happily sacrificing all attacking intent of their own for the time being. Blackburn's second half passing in it's entirety is displayed here, and their lack of adventure is quite frankly a disgraceful act of cowardice.
The people who loved it, of course, were the Sunderland central midfield players, who were able to forget about defensive responsibility, camp in the opposition half, and just distribute the ball to the wings at their leisure. They barely made a handful of passes in their own half between them after the break. 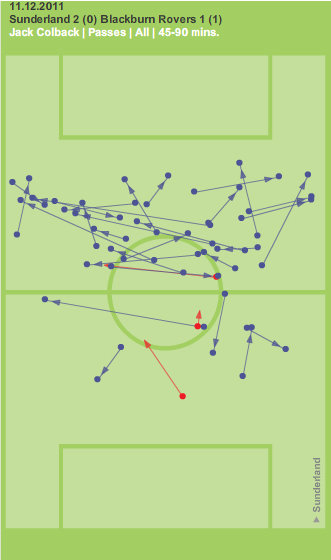 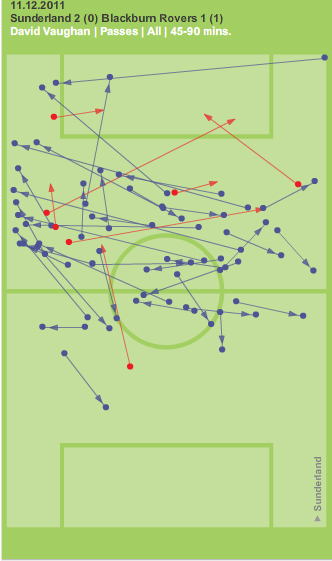 We must of course acknowledge the part O'Neill played in this, however, as the instruction to the defence to push right up to the half way line and take advantage of Blackburn's mentality will have undoubtably come from the touchline.

Although just one game and against opposition who did not want to attack, the signs were pretty much exclusively positive. Sunderland won the ball more tenaciously, used it more efficiently, and there was a clear identifiable system to their football. A plan to stick to. Astute observation and guidance was also offered from the touchline that positively influenced the game. All in all, a very good day at the office.

In many ways, winning the game in this fashion wass ideal. Going out and stuffing Blackburn by a big scoreline, which was probably what they deserved, would have been nice, but this way both the players and the fans have had belief restored that this team can win games from adversarial positions.

With a bit of luck this wasn't a one off and Martin O'Neill will force me to make a new checklist. Here's hoping.