With our usual tactical guru Chris Weatherspoon exiled somewhere this weekend and unable to feast his eyes on any football, I get another turn to cast a more analytical eye over a Sunderland game than is perhaps healthy for one's aspirations of continued mental stability. Just think of me as your very own Steve Staunton. Actually don't. Please don't. Ever.

To say that the home clash with Fulham was an unremarkable 90 minutes of football would, if anything, perhaps be understating its monotony. Where Sunderland fans traditionally lament the regularity with which we are shown last on Match Of The Day, this week most were just grateful, or surprised, we made the cut at all. If the editors had accidentally misplaced the footage of the game and replaced it with a home-made video of them dusting off an old NES and enjoying a game of 'Duck Hunt' whilst listening to a loop of 'Cotton Eye Joe' by the Rednex, I very much doubt there would have been quite as many complaints as you'd probably expect.

Anyway, lets get on with it...

First of all, the positives, because there were some. It must be said that Steve Bruce has fashioned what looks like a very sound defence this season. Sunderland have not been beaten by a greater winning margin of a single goal yet this term, and that is despite having already faced 6 of the current top 8.

There are several contributing factors to that, such as the defensive additions of Brown and O'Shea, but principally amongst them is the fact that Sunderland have greatly improved their composure on the ball and ability to maintain possession. Simple logic will tell you that the longer you are in possession of the ball the less opportunity the opposition have to put it in your net. Indeed, many a football dynasty and success story have been built upon that very idea, such as the great Liverpool and Forest sides and the current Barcelona one. Obviously we are nowhere near that level, or look like attaining it in any of our lifetimes, but massive strides have been made in possession retention at Sunderland since last season.

This development in the Sunderland game very well highlighted by comparing possession against Fulham this weekend with the corresponding fixture just 7 months ago. 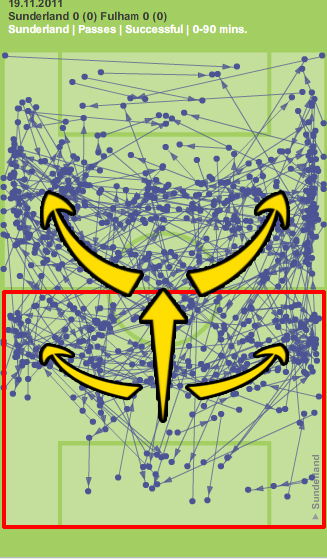 First thing we notice is that this season's Sunderland defence are far more adept at maintaining possession without compromising their shape than their counterparts of last season. Last season's pass map, which was typical for any stage of the season has the characteristics of starting deeper, which in turn pulled the midfield deeper to offer support, but allowed far too much space between phases of play and usually resulted in hurried and hopeful passes being attempted as the opposition were able to press much higher up the pitch.

The graphic on the right shows this weekend's map, and it is remarkable just how much more balance and control is evident. In fact, a clear and definitive system of play can be identified which is common with a classic old-fashioned 4-4-2 system. With the distribution from the back greatly improved, the midfield were able to collect and distribute the ball to the wide areas without travelling far enough to disrupt the shape of the team. The result was that the Sunderland attacking players received more opportunity to deliver a ball into the box from good position and much more fluid movement of the ball.

Whilst it didn't produce a goal on the day, it provided considerably more defensive stability and control than we saw last season, and if nothing else it is evidence of some real progression in the team's play. It should be noted that in April's meeting between the two sides, Sunderland had a team-wide pass completion rate of just 65% (323 successes from 495 attempts). This season, and with the exact same midfield paring of Jack Colback and Lee Cattermole, that jumped to 80% (387 successes from 481 attempts).

But for all this season's Sunderland midfield can expect to see a lot more of the ball in better positions, there was little evidence that they are especially well equipped to do anything with it. Chief amongst the wasters was old Mr Marmite himself, Ahmed Elmohamady. The Egyptian struggled to get anywhere near the standards of precision that Seb Larsson is setting this season and really saw more than enough of the ball in advanced wide areas to be expected to have 'thorn in our side' status bestowed upon him by a losing opposition manager in his post-game remarks. 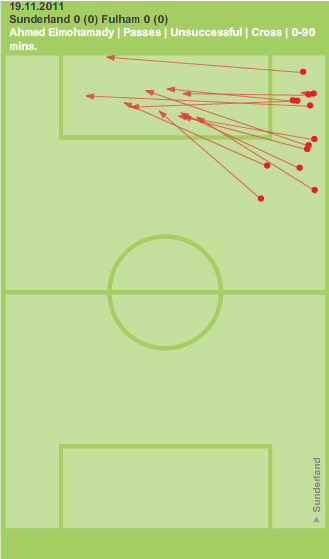 It would, however, be unkind to lay too much blame at Elmohamady's feet, or any of the midfield. For all their contribution in the final third could have been much better, on almost every occasion they found themselves looking up to deliver a final ball only for there to be no real target to hit.

With Connor Wickham injured, Steve Bruce reverted to the front pairing of Niklas Bendtner and Stephane Sessegnon, with the Dane assuming Wickham's responsibilities of leading the line as the furthest man forward. It came as little surprise when this combination didn't work, because it hasn't really worked at any other point this season either. Bendtner simply isn't suited to the role. His natural game is to drop off into the classic 'number 10' position of linking midfield and attack, and he does it very well. It can be a nightmare for defenders to cope with, and I would never dream of faulting him in any way for it. But the fact remains that with Bendtner and Sessegnon partnering each other, Sunderland's entire forward line are doing exactly what Fulham want them to be doing and entirely voluntarily - running away from goal.

If we compare Wickham's last home appearance to Bendtner's this weekend when playing the same role, we can see just how comparatively bereft of Sunderland presence the Fulham penalty box. 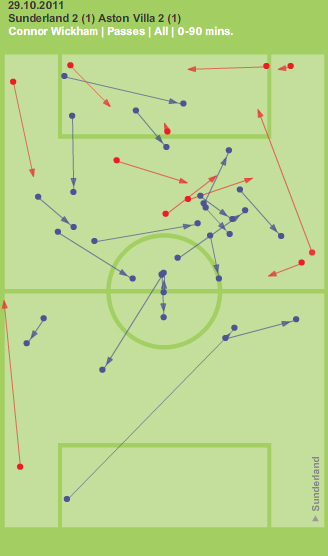 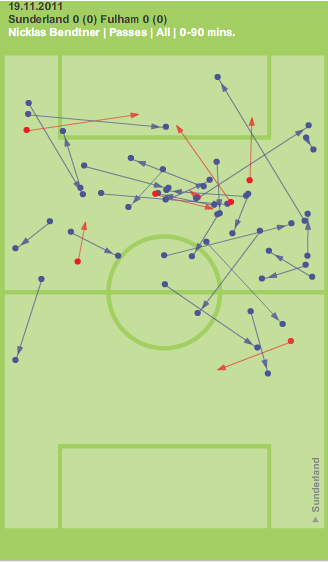 The contrast is palpable. Wickham is a player who loves to be in the box, occupying centre halves and providing a target from which he can score goals. That is his natural game. Bendtner on the other hand prefers to take a more active part in the build-up. Together they are a real handful, two natural games complimenting each other splendidly. But Bendtner is not and will never be a bruising penalty box player, and the sooner the management realise this the better.

This was a game in which Sunderland confirmed that they are a much more controlled and assured side with the ball at their feet than last year, and that is a massive positive. Distribution from the back has improved immeasurably and it is proving the platform for much better consistency in possession.

But the major concern to come out of this game is how a meagre two players being unavailable, Larsson and Wickham, was all it took to completely de-claw the Black Cats and expose the worrying lack of depth in the squad. Without a traditional centre forward looking to attack space behind the Fulham defence, the option to play through the Cottagers was taken clean off the table, and without any quality delivery and presence in the box Hangelaand and co were never going to be troubled in the air.

How much of this can be laid at the feet of Asamoah Gyan may be the question having reneged on a promise to stay and provide the kind of final third penetration so lacking this weekend is a fair question. Either way, the management needs to come up with some answers to the problem and quickly if our season is ever to really get going.