Share All sharing options for: Behind Closed Doors - The Black Cat Diaries

Never being ones to leave any stone uncovered, here at Roker Report, we had a thought. What exactly do Samson and Delilah, the Sunderland mascots, get up to when they aren't out there on the pitch on a matchday?

We're all used to seeing them by the side of the pitch before kick off, but when the game is over and done with, what exactly goes on in their lives?

Have you ever asked yourself the same thing? No? Is there a good reason as to why? Probably. But, ignore that and read on.

We've got the exclusive first entry from Delilah's diary, right here on Roker Report, and, fingers crossed, we'll be bringing you more from the lives of our two favourite felines, as the season progresses.

I really hate to see Samson like this. I mean, it’s been bad in the past, but never like this. He didn’t talk to me all the way home in the car, just stared straight out of the window and muttered the occasional word to his Radiohead CD. It’s always Radiohead when he’s like this. I stared at him for most of the journey, and I’m sure he knew it, but he didn’t look over once. Just stared and stared, the poor guy, his eyes were red around the edges from where the tears had been.

The thing is, we went to work in such a good mood this morning. He had finally shaken himself out of the slump after the Norwich match, and we were both on form when we got to the ground. He was his old self again, laughing with the kids and having a joke with the players on the pitch at the warm up. He had even arranged to go to Nandos tonight with Meyler. And he bloody loves Nandos does Samson.

But instead, here we are again.

I mean, it made sense not for us to go to the Norwich game, what with them being the Canaries and the court proceedings still hanging over us like they are. I’d love to say that ‘the incident’ wasn’t our fault, but, well… You put two cats next to a six-foot seagull and what do you expect to happen? We all said sorry and that, miserable git. Anyway, no visits to Swansea or Newcastle for us this season either now. Thanks Brighton.

Anyway, Samson… We had to stay in and watch the Norwich match on the Sky+, but he was really up for it. He hadn’t really stopped partying since the Stoke match in all honesty. That’s the thing about my other half, he hits the highs high, but gets lower than anyone I know. You should have seen him after we beat Stoke, honestly… I’ve warned him about Jagerbombs, but the daft sod never listens. Well, not until the nice barmaid at the Lampton Worm asked him to pop his shirt back on and get off the bar.

Of course the problem for me was what actually happened in that match. After a week of him wittering on about it, explaining why we should beat them and kick start our season, well, you know as well as I do what happened.

I’d just gone to make myself a cuppa (Samson is strictly a beer man on a match day) when I heard the second goal go in, and that was that. I could actually see his heart sink when I got back into the room, and even our Ricco’s goal didn’t get him going. I expected a tantrum at full time, but no, he just walked over to the CD rack, grabbed OK Computer and took himself off to the study, or ‘the boot room’, as he likes it to be called.

It’s where Samson always goes when he’s down. It’s all kitted out in merchandise you see, and when you walk in, we’ve got one of them life-size cardboard cut outs of Jon Stead that meets you at the door. I don’t know what it is about Jon’s face that Sams needs to see when he’s depressed, but recently Steady’s been seeing more of him than me.

I didn’t hear another thing from him that night, just Thom Yorke through the wall and an occasional whine and whimper. Just better leave him to it I thought. Wish I hadn’t though, it wasn’t pretty in the morning. There were empty cans everywhere, Jon was upside down in the corner and Samson was passed out on the floor, sick all over his top. The Keane season DVD was on in the background, but only the smell of coffee and a cold glass of water in the face could have woke him up that morning.

I’m wittering aren’t I? Sorry, but it’s not easy at times, you know, being a bit of a celebrity around here. It can be tough, and get a little bit lonely, what with everyone watching everything that we do all the time. That’s why I’ve started this diary, you know, to give me somewhere to write it all down, and feel like I’m telling someone about it. No-one else knows what I have to put up with, looking after this one and his moods. But, well, don’t let me go on about it too long.

Anyway, what’s happened today is much worse than last Monday, and I dread to think what’s going to go on tonight.

You see, like I was saying, everything was going so well, but then West Brom got them two goals, and we were right back in the same boat, only this time, the lads actually did something about it. I’d like to think it’s because they saw Me and Samps at the side of the pitch after that second goal, infact I’m sure that I saw little Sess’ wink at me when I was giving him the thumbs up, and even though we didn’t win, it didn’t feel like the end of the world at five o’clock on Saturday. Yeah we were disappointed, but we could live with a draw.

But then he went and said it, didn’t he, that Mr Bruce.

Do you know? We never had any problems when Mr Keane was here. I mean, he didn’t talk to us much, but Uncle Niall explained that Mr Keane was more of a dog person and we were happy with that. He always gave us a smile on his way past, not much more, but that was good for us.

But this Mr Bruce. I couldn’t believe my ears, and poor Sams, like I said, he’s just devastated.

It happened in the tunnel after the match. Mr Bruce was stood talking to that funny little man from the BBC, Garth Crooks I think they call him, while Me and Samson stood and waited for all the fans to go home, and that’s when we heard him. I remember it all perfectly too, like it was in slow motion.

Garth said to Mr Bruce, ‘so Steve, a shocking start to the game and only a point from a winnable game, what happened?’, and that’s when he said it. ‘Well Garth, I’ve had a look around the club recently and think it can really only be one thing. I thought it was the fans being hysterical, I thought the players were trying too hard, hell, I even thought for a minute that it might even be me, but then I realised, it’s those f*cking cats. Pottering around my pitch, talking to my players and laughing with my fans, those hairy b*stards stand for everything that’s wrong with my club, and if I don’t get rid, then I might not take this club back into the top ten.’

I didn’t know what to say. The old cliché seemed perfect, the cat as good as had got my tongue. But Sams, well, the look on his face said it all, and the tears came pretty much straight away. Never in our time here have we left before the stadium was empty, but we were out and in the car quick as a flash after that. Infact we left that fast that I knocked little Jacky Colback straight over in reception and didn’t even get chance to say sorry.

And that’s that. I’m sat in the kitchen, scribbling this down to try and make myself to feel a bit better about the whole thing, while Sams is hidden away in the boot room again. I keep trying to talk to him, but he’s so drunk that I just can’t get any sense from him. The last time I checked, him and Jon were singing Creep, Sams just in his pants, with his picture of him and Julio in his hand. Think I’ll just leave him to it.

I can’t believe I’ve been so daft. Two days it took him to come out of the room, but there he was, tail between his legs and a sorry look in his eyes. Thing is, all of a sudden he let out a shriek, grabbed the gin from the cupboard and ran back into the room. At first, I had no idea what was going on, but then I saw it on the table, yesterday’s bloody newspaper looking back at us. 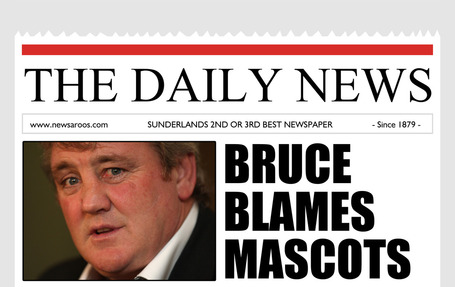 I’ve tried to make him see sense today, but it’s no good. I can just hear him through the door, whispering the same sentence over and over again. Horrible words that will haunt me in my sleep tonight… ‘I miss Howard Wilkinson’.