Sunderland welcomed Aston Villa to the Stadium of Light on Saturday looking to build on their 2-0 victory away at Bolton last weekend. The honours ended up shared following a late equaliser from Stephane Sessegnon, with four goals belying what was, in truth, a rather drab and mediocre game. The Villains dominated possession for long spells but rarely looked incisive, while Steve Bruce's men, though happy not to lose, will have perhaps worried that as the home team they never truly looked in the ascendency.

Manager Bruce opted for the formula that had worked at Bolton last week, employing a 4-4-2 with Nicklas Bendtner and Connor Wickham leading the line. The one real change from the previous week's starting line-up came with Sessegnon and Seb Larsson swapping wings; the Benin international starting the came on the left (where he had finished at the Reebok Stadium) and the Swede occupying the right.

Troubles on the left?

Recent observations by Sunderland fans (including myself) have often been drawn to the view that Steve Bruce's decision to play Seb Larsson on the left of midfield instead of the right was a puzzling one. Yesterday was perhaps the day when such a decision was vindicated.

Bruce opted, as many had hoped for, to go with Stephane Sessegnon on the left, and placed Larsson on his more favoured right. However, it soon became obvious why he had refrained from doing this earlier in the season. 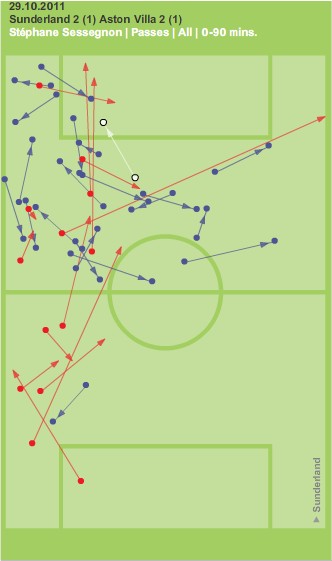 As shown above, scarcely any of Sessegnon's activity came in his own half, a fact which heaped the pressure on Kieran Richardson at left-back – a man who, it cannot be denied, isn't an out and out defender himself. Most of Sessegnon's attempted passes in his own half actually saw him give the ball away; defensively, he offered very little.

This could be seen in the build-up to the game's opening goal. Alan Hutton, a fantastically attack-minded full-back, roared into the acres of space between Sessegnon and Richardson, and provided the assist for Petrov's goal. While it is ludicrous to blame Sessegnon for that opener – it was a brilliant strike for which no one could really be blamed – this did provide a perfect example of why Bruce was reluctant to move Larsson from the left. Larsson contributes quite well defensively, which in turn helps out Richardson, who is very much still finding his feet as a defender. With Larsson out of the picture, this support wasn't there, and Hutton made great attempts to exploit this. As shown below, a lot of the ex-Sunderland loanee's activity came in the opposition half. Indeed, Villa focused almost half (46%) of their attacks down the right side. 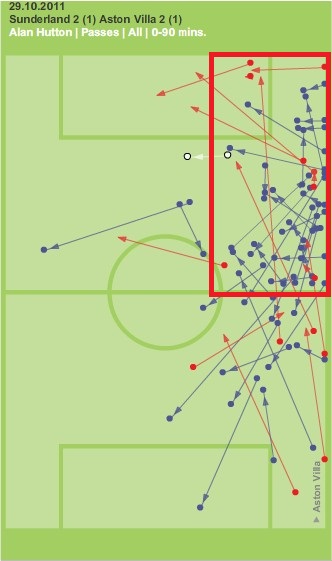 Sunderland will have pinpointed this a game they should be looking to take three points from beforehand, as they would like to put themselves on a par with such sides as Aston Villa. That such three points were not forthcoming was disappointing, but there were still positives to be found.

Most notably, the aforementioned Larsson put in another strong performance, and looks to have been a very good summer buy for the club. According to whoscored.com, the Swede contributed five key passes in Saturday's game, a figure that only man of the match Stiliyan Petrov was able to mirror. Furthermore, his delivery is, at times, almost unplayable for opposition defences. It is true that Sessegnon was unmarked six yards out for the second equaliser, and that Shay Given should have done better, but the fact remains that Larsson's ball in was perfect for his teammate.

In addition, another summer signing in the form of Connor Wickham had a very good game. Alongside Nicklas Bendtner, the two worked well, and Wickham showed himself to be just as big a handful as he had the weekend previously. He took his goal well, on his left foot, and imposed himself on the Villa defence.

The short, brisk nature of this piece simply reflects the game itself: there wasn't a lot to write home about. Each side's opening goal came as a result of largely individual play (Wickham was aided by the industry of Sessegnon, but the young Englishmen still had plenty to do in order to beat Shay Given and a throng of defenders), while both teams' second goals were derived from poor defending, combined with fairly good delivery, at set-pieces.

Stiliyan Petrov was very much the key threat to the Black Cats. The Bulgarian not only scored a fantastic goal, carving an opportunity when numerous red and white shirts stood between him and the net, but he was also integral in many passages of play. His passing was, for the most part, excellent, while he contributed defensively with a number of interceptions and successful challenges.

In response, Sunderland's central midfield looked somewhat lightweight. This would explain Steve Bruce's decision to send on the imposing David Meyler, but one does wonder if the Irishman was yet ready for a sustained period on the field. David Vaughan and Jack Colback, when they did have the ball, were rarely wasteful; problematically, there were also rarely helpful in finding openings for the two men in front of them.

All in all, as stated, this was a drab affair between two sides who will no doubt go on to have fairly mediocre seasons. For Sunderland, it was a day when a point was probably deserved, but never any more than that.